How the Republican tax cuts are failing workers, in one chart 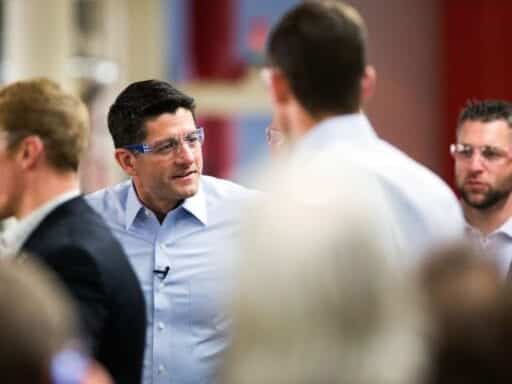 When Republicans delivered $1.5 trillion in tax cuts last December and slashed the corporate tax rate from 35 percent to 21 percent, they said it would come with a big wage boost for American workers. Except it hasn’t.

Over the weekend, this chart from Bloomberg showing private data from PayScale’s wage index swept across Twitter. It shows a drop in wages in the second quarter of the year. While wages have risen by 12.9 percent overall since 2006, wages adjusted for inflation (so-called “real wages”) have actually fallen by 9.3 percent.

And between the first and second quarters of 2018 — after the tax cuts were enacted — real wages fell by 1.8 percent.

Wages were supposed to rise after Trump’s tax cuts. Instead, they’ve fallen https://t.co/LactYzTE7a via @bopinion pic.twitter.com/qUdfYQK1En

As Noah Smith, the Bloomberg writer who highlighted the PayScale data in a story on the tax bill’s benefits for workers — or, rather, lack thereof — points out, official Bureau of Labor Statistics data from the second quarter isn’t available yet. Two quarters might be too early to gauge the tax bill’s effects on wages.

Still, the data out there is discouraging: According to the BLS, wages and salaries increased by about 2.7 percent year over year in the first three months of 2018. That’s pretty much in line with inflation. And even as unemployment levels are historically low, worker pay isn’t rising.

It’s not that corporations don’t have more money — it’s that they have no particular reason to give that money to workers.

The Republican tax bill has been a major windfall for corporations and the wealthy.

When the tax bill was passed, a number of corporations announced bonuses and investments. Some of those were recycled news, and regardless, while a $1,000 one-time payout is a nice boost, it is not a sustained benefit to workers in the same way a wage increase is.

Some Republicans have even admitted that the tax cuts aren’t the boost to workers they promised. Sen. Marco Rubio (R-FL) this spring said there is “no evidence whatsoever that money’s been massively poured back into the American worker.” President Donald Trump has already started talking about a new tax bill that would reduce the corporate tax rate even more and make temporary tax cuts for families and individuals permanent.

Further complicating the matter for the GOP: Trump’s trade war, which could wipe out the benefits of the tax bill altogether, including any potential boosts to wages. Former top Trump economic adviser Gary Cohn said in a June interview that the White House’s tariff battle could increase inflation and consumer debt and erase any positives from the tax cuts.

The conservative-leaning Tax Foundation estimates that Trump’s enacted and proposed tariffs completely reverse the tax bill’s positive effects on the labor force. It estimates the tariffs enacted so far will reduce wages by 0.04 percent and eliminate more than 48,000 jobs. If the White House enacts every tariff it’s threatened, it would reduce wages by 0.26 percent and slash 277,000 jobs.

For anyone keeping track, we are now estimating that the negative effect of the enacted and proposed tariffs completely outweighs TCJA’s positive impact on the labor force in the long-run. https://t.co/xm4c5yFzSw

In an appearance on CNBC last week, Trump bragged that the United States was essentially “playing with the bank’s money” in launching a trade war because the stock market is up so high. American workers who aren’t seeing their wages rise would likely disagree.