How the scrunchie rose and fell and rose again in popularity 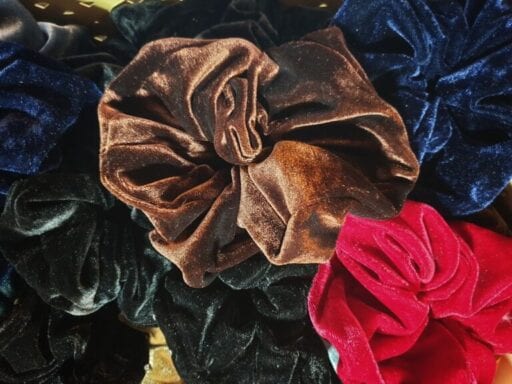 Share
Loading...
The scrunchie was the cool-girl accessory in the aughts, and now it’s back. | Getty Images/iStockphoto

From Heathers to VSCO Girls, the scrunchie has always been about far more than hair.

The Netflix movie, To All the Boys I’ve Loved Before, had a scene-stealing cameo: a scrunchie. The fabric-covered hair tie is the centerpiece in a power tug-of-war between the protagonist, Lara Jean, and her former BFF turned mean girl, Genevieve. (“We used to be best friends,” Lara Jean explains in voiceover, “but post-middle school, for reasons having to do with her popularity and my lack thereof, we are now decidedly not.”)

The scrunchie in question passes as a kind of love token from Lara Jean to her pseudo-boyfriend, but Genevieve intercepts it and later flashes it in front of Lara Jean as a show of domination.

“Peter gave this to me. Isn’t it cute?” Genevieve says, making a show of tying up her hair. “I love the colors in it.”

Thirty years ago, this hair accessory was a similar talisman in the movie Heathers. It was the physical marker of who ruled the school, stolen off the reigning alpha-girl by a challenger. Director Michael Lehmann wasn’t subtle about its significance: In the opening shot, a red scrunchie is passed through the blond ringlets of queen bee Heather Chandler. From there, it passes from one Heather to another, as the social standings in the school shuffle, until the main character, Veronica, yanks it from Heather Duke’s hair at the end, declaring, “There’s a new sheriff in town!”

The scrunchie was so critical to the plot that when Heathers was adapted as a musical in 2014, costume designer Amy Clark made custom jumbo ones that could be seen from the back of the house.

Why is it that this fabric ponytail-holder is always shown ensnarled in power struggles? Could it be that it’s not only depicting the swings from friendship to frenemy but also the seesaw of trend cycles themselves? After all, if this type of bullying had a catchphrase, it could be the one from Project Runway describing the ruthless revolving door of fashion itself: “One day you’re in, and the next, you’re out.” And the scrunchie has most certainly been both.

When we think of a scrunchie, we think of a girlish, frilly doohickey commonly housed in a Caboodles. Yet impossibly, it’s become shorthand for alpha-girl schoolyard status. Many items of women’s apparel communicate power, but notably, they’ve been lifted from the men’s department. Picture the power suit, the briefcase, shoulder pads, even heels — the trademark footwear of femme fatales. As Summer Brennan writes in her book High Heels, “history’s first true high heel — a 16th-century Persian man’s cavalry shoe — was a grip for the stirrup.” Later this footwear morphed into the talons hauts that stylish gentlemen peacocked around in Louis XIV’s court to display their rank.

By contrast, the history of the scrunchie is short. Nightclub performer Ronny Revson patented the scrunchie in 1987, modeling it on her elastic-waisted PJs. (Several sources also credit Philips E. Meyers as the original inventor back in the ‘60s, but he never secured a patent and the accessory remained largely unknown in his day.)

“Hair has been a vehicle for self-expression, especially for women.”

But while the scrunchie’s history is brief, the timeline of hair accessories is incredibly long. Kimberly Chrisman-Campbell, fashion historian and author of Worn on This Day: The Clothes That Made History, confirms as much. “As long as women have had long hair,” she says, “there have been hair ornaments.” Hairstyles themselves have also served as a form of communication. “Hair has been a vehicle for self-expression, especially for women because they didn’t have the other means of self-expression that were available to men,” Chrisman-Campbell says. During the late 18th century, an era Chrisman-Campbell specializes in, women expressed their pent-up opinions in elaborate, ornamented hairdos that acted as billboards for all kinds of causes du jour — championing one composer over another, celebrating inoculation, even commemorating a specific French ship that won a battle against the English — using symbolic baubles woven into their poufs (fake snakes, olive branches, entire miniature ships complete with sails). “Hairstyles were relatively easy and inexpensive to update, so they were very sensitive to changes in pop culture, changes in politics, changes in the news cycle. And I think that’s true today,” says Chrisman-Campbell.

When it comes to the scrunchie as portrayed in Heathers and To All the Boys I’ve Loved Before, Chrisman-Campbell compares its significance to the ultimate power accessory — the crown. She notes that in both films it’s not just the item itself that’s important but its lineage. “It’s recognizably someone else’s scrunchie,” she says, “so it belonged to a certain person and took on her social power.” Similarly, a crown’s power is compounded by its association with all the previous monarchs who wore it. In these narratives, as is often the case with a crown, there is only one method for acquiring the scrunchie, and that’s “taking it by force in a very Shakespearean way,” says Chrisman-Campbell.

This crown comparison brings to mind Taylor Swift’s anti-bullying song “You Need to Calm Down”: “We see you over there on the internet, comparing all the girls who are killing it. But we figured you out. We all know now; we all got crowns.” Unfortunately, the reality is that crowns (both literal and metaphorical) are bestowed only on those with privilege and status. And the Heathers and Genevieves of the world have always conspired to snatch them, and that’s where relational bullying can come in.

Signe Whitson, social worker and author of Friendship and Other Weapons, says traditional bullying is a one-on-one fight, “but in relational bullying, it’s ‘I’m mad at you, and I’m going to get everybody else I know to be mad at you, too.’ It’s a power-in-numbers kind of dynamic.”

According to Whitson, relational bullying is also defined by all kinds of physical markers. The classic example is not having a seat at the regular lunch table. But this plays out in various other exclusionary ways, such as fashion. Clothing and accessories are easy targets, she says, because they’re so clearly loaded with class and clique symbolism.

Whitson also notes that these abusive dynamics can become cyclical “when people never find their boundaries and never stand up for themselves.” Kids can find themselves seesawing, either “in” or “out” with a group — friends on Tuesday and frenemies on Wednesday.

When the scrunchie itself was on the outs, it was labeled a look purely for bumpkins, a punchline on Sex and the City. In one episode, Carrie Bradshaw debates the accessory with her boyfriend as a detail in his novel. “A scrunchie? No woman who works at W magazine and lives on Perry Street would be caught dead wearing a scrunchie!” she says. Later, the couple runs into a woman wearing one — along with a grandmotherly sweater-set and a deep country accent. Carrie’s point is proven: The scrunchie is only for the dumpy fashion-illiterate.

Even as a fictional character, Carrie was considered the ultimate tastemaker of the early 2000s — TV Guide declared her the most fashionable character on TV. Her wardrobe launched the sale of countless Manolo Blahnik heels and nameplate necklaces. When she dragged the scrunchie, she slashed its credibility to ribbons.

The scrunchie went from queen bee status symbol to fashion roadkill and then, in another tilt of the seesaw, it rose again to rule the school. Of course, as Chrisman-Campbell notes, fashion trends are generally cyclical, marked by various moments of “minimalism and maximalism going back and forth.” But the swings of the scrunchie are strikingly extreme: from the throne to the gutter and back again.

Fashion trends are generally cyclical, marked by various moments of “minimalism and maximalism going back and forth.”

Today, the scrunchie has ascended back to the top of the fashion hierarchy, and VSCO girls have adopted it as a critical part of their uniform. Writer and trend-forecaster Andrew Luecke, who co-authored the book Cool: Style, Sound, and Subversion that documented 100 years of teen subcultures, finds a lot to admire in the VSCO girl, calling her pseudo-preppy style a “Trojan horse.” “You sneak in all of this environmental activism under the guise of a preppy style, which isn’t necessarily always associated with rebellion or social justice,” he says, pointing to the Hydro Flask and metal straw that are also part of their getup.

As the name implies, VSCO girls were born from the VSCO app and are our particular social media moment of 2019. “Their home is YouTube and TikTok,” says Luecke. “Greater society or older people look at these platforms as superficial. But if you look at the VSCO girl, you see a really interesting sort of element of social awareness popping up.” According to Luecke, the style element — tossing on a scrunchie and a pair of dolphin shorts — can be “a great gateway for getting young women interested in social activism.”

Yet it’s hard to tell if the scrunchie’s association with VSCO girls is a sign of its apex or its decline back down to passé. So many of the VSCO girl videos online have one thing in common: They’re trying on the look as part of an experiment or a joke — “Becoming the Ultimate VSCO Girl” or “Transforming Myself Into a VSCO Girl” are common titles — and they’re overloaded with self-deprecating humor. “I’m already pretty basic,” vlogger Kenna Marie says. Kenna Marie also clarifies in a note below “Please don’t take the amount of scrunches I put on seriously. That’s the point of the joke.”

There is one sad constant between the VSCO girls’ scrunchies and the Heathers of yore, and that’s how bullying is still present. Skimming the comments on these VSCO girl videos, it’s easy to spot a thrumming backbeat of negging, one where girls are being teased for everything from their voices to their hair to their bedrooms’ wallpaper.

How do you combat toxic bullying when it’s so entangled in girlhood? Whitson sees one emotion as the solution — anger. She feels it’s critical that all kids, especially girls, understand that anger is OK. “Girls are still more socialized [to believe] that anger equals bad, and that a good girl wouldn’t be angry at her friend,” she says. Standing up for yourself, setting boundaries, and acknowledging your feelings are ways of ending any abusive cycle.

Thirty years ago, Heathers ended much this way. Veronica emerges from the scorched earth, defiant. She crowns herself with the red scrunchie, announcing that this era of abuse is over. Today, VSCO girl videos tend to end with the usual chorus of “like and subscribe” but there are also sign-offs like vlogger Bailey Dedrick’s. With hair half up in a scrunchie, she closes with, “I don’t know if this video is bad … I wish it was probably better,” possibly anticipating the mix of praise and snark that unrolls in the comment section below.