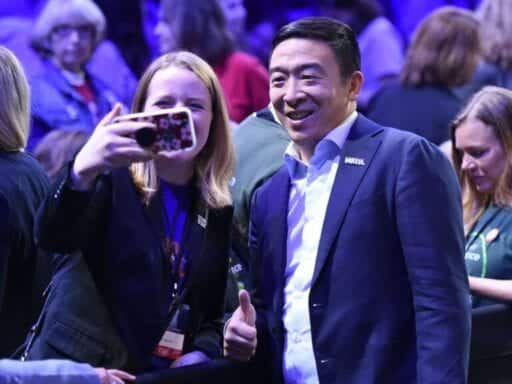 For politicians, the buzziest new social video app presents a risk and an opportunity.

In 2015, Hillary Clinton was “yas queening” all over the internet. She had an official Snapchat account with a “Yaaas, Hillary!” logo that was also a T-shirt, a posed #yas photo with the stars of Broad City, custom Hillary Bitmoji, ironic cross-stitch art, and other signifiers of “yas” culture that’s since become emblematic of a certain kind of blinkered white feminism. An attempt to reach millennials with a passing familiarity with stan culture, it was also an extremely strategy easy to mock. As Amanda Hess wrote at the time in Slate, “American culture does not exactly appreciate the image of the ‘authentic’ older woman, but boy does it hate the older woman who strains to stay relevant.”

Hillary Clinton lost the election. That fact certainly can’t be attributed solely to a social media voice that many criticized as insincere and pandering, but it had a lasting impact on the ways we expect politicians to behave online.

It also might offer a clue on why so few politicians have a presence on the buzziest social media app of the moment, TikTok. Since its US launch in August 2018, the short-form video app has exploded in popularity, having been downloaded more than a billion times in 2018 and boasting 27 million active American users as of February 2019. Both Facebook and Instagram have launched competitors (or clones, depending on whom you ask), and celebrities like Will Smith, Ariana Grande, Ed Sheeran, and Reese Witherspoon are now flocking to the app en masse.

Politicians, meanwhile, have been understandably hesitant to hop on board. Like all social media apps, TikTok has its own vernacular, and any transgressions of that shared language and sensibility stick out like, well, septuagenarian politicians on a social media app meant for teens. The fear of coming off as insincere or being flooded with “ok boomer” comments is a real one. The other outcome? A TikTok presence that fails to leave a mark, like Julian Castro’s account, which currently only has 470 followers.

Still, that leaves an opportunity. Enter: the TikTok account of an equally stodgy publication that has, against all odds, managed to feel truly native to the TikTok ecosystem. It’s the Washington Post’s, which since its debut this spring has amassed a quarter-million followers and a legion of superfans who praise its goofy premises and unserious tone. So far, three candidates — Andrew Yang, Beto O’Rourke, and Julian Castro — have appeared on it.

The Washington Post’s TikTok’s success is the direct result of its creator and biggest star, 28-year-old Dave Jorgenson, who previously created humor and satire videos for the newspaper. A scroll through the Washington Post’s TikTok account will show Dave making self-deprecating jokes about being an adult on the app, Dave occupying the role of “the TikTok guy” in meetings, Dave doing silly 15-second sketches with the paper’s fashion, gaming, and economics reporters.

Jorgenson attributes the growth and fanbase of the account to his spending two months watching and listening to videos on TikTok instead of rushing to quickly turn around content. “If you’re gonna launch anything, whether you’re a newspaper or a brand or a company, you need to understand the app, otherwise people will see right through you,” he says. “Especially on TikTok, because the whole thing is that it’s mostly just raw videos set to music.”

The Washington Post, however, has what regular TikTok users don’t: access to very important people. In October, 2020 Democratic presidential candidate Andrew Yang just happened to be scheduled to visit the Washington Post’s offices filming an unrelated segment when Jorgenson was able to strike a plan with Yang’s team about filming a TikTok.

Yang’s team was already a fan of the Post’s TikTok account; the campaign has also leaned heavily on the fact that he is a tech entrepreneur. “We didn’t really have to sell it to Andrew Yang,” says Jorgenson. “He was like, ‘If they think it’s great, I’m going to do it.’” It’s a particularly impressive feat considering the resulting video was actually poking fun at Yang’s low polling numbers. “Finally relaxing after a full day of interviews and meeting people,” reads the caption on the first segment, followed by “Still polling at 3 percent” against a backdrop of Yang dancing in celebration.

The paper has since done equally self-deprecating videos with both Beto O’Rourke, who ended his campaign on November 1, and Julian Castro, whose video was a play on how much he looks like his brother, Texas Rep. Joaquin Castro. All three videos took off, garnering between 40,000 and 400,000 likes.

Though neither Beto’s nor Castro’s team replied to a request for comment, Yang’s press secretary told Vox, “We’re constantly exploring ways to reach new audiences and voters, and the TikTok video with the Washington Post is certainly one of those ways.”

Since the election of Donald Trump proved politicians could tweet rambling, often nonsensical stream-of-consciousness sentences and still win over voters, politicians have approached social media with an increased candidness. New York Rep. Alexandria Ocasio-Cortez has posted her skin care routine to her Instagram stories; O’Rourke live-streamed his haircut; Elizabeth Warren posts videos of herself calling small-dollar donors to social media and makes a point to pose for every single person who wants a selfie after her town halls. In an age where we expect to be welcomed into the homes and lives of everyone we follow online, connecting with politicians has never felt so intimate.

Politicians have historically been pretty terrible at social media. A cursory glance at Mike Huckabee’s tweeting habits will illustrate as much — the former Arkansas governor and presidential candidate was once described by Fast Company as “the least funny person on Twitter.” Even cool-ish, young-ish presidential candidates are sometimes bad at tweeting. Cory Booker has made the same joke — a bit of PG-13 wordplay about coffee and sleep — 14 times over the past decade.

There are now more avenues than ever for politicians to embarrass themselves online. Instagram, for instance, has gained popularity among politicians faster than any other social media platform over the past few years, and was also the site of O’Rourke’s now-infamous live-streamed dentist appointment.

Aidan King, a senior strategist at Middle Seat consulting who has worked on presidential campaigns for both Bernie Sanders and O’Rourke, says that there’s a certain degree of apprehension in approaching any new social media platform. If candidates don’t know precisely who they’re speaking to, their message can be warped into something else. “There’s nothing worse for a political campaign than going viral for the wrong reasons,” he says.

TikTok, with its legions of irony-steeped teens, presents a specific danger. “The zoomers can be pretty ruthless, and it’s also clear which candidates they like a lot,” explains King. “Young people are really into Bernie Sanders, Andrew Yang, Elizabeth Warren, so I can understand why other candidates in the 2020 races just don’t really want to mess with [TikTok]. Joe Biden going on a platform that adores Bernie Sanders and Alexandria Ocasio-Cortez is a recipe for disaster. They know the audience well enough to know they wouldn’t really get along with the people there.”

The Washington Post’s TikTok, though, is a controlled environment where candidates have little to lose, even when the content is unlike anything a political PR team would have typically come up with. “There’s just this very positive feeling around TikTok. Even if they are self-deprecating, they’re pretty wholesome,” Jorgenson says. “While the text in front of Andrew Yang was deprecating, it’s very funny. How could that hurt you?”

Jorgenson hopes to get every 2020 Democratic candidate in a video and has reached out to multiple candidates, but there is one white whale in particular. “I think if we get Bernie, then we have done our job, because I don’t know how we’re going to. But I’d be very proud of myself,” he laughs.

There are concerns over TikTok’s ties to the Chinese government (its parent company Bytedance is based in Beijing) and its willingness to bow to conservative governments by censoring pro-LGBTQ content, but the app has always wanted its content to remain politics-free. It recently announced it would ban political advertising out of a desire to remain a “positive, refreshing environment.” While nothing is stopping politicians from using the app, they may be hesitant to engage with one that will soon be under investigation by the Committee on Foreign Investment in the United States.

It’s also likely it simply isn’t worth building a following on an app where a sizeable portion of its users aren’t even old enough to vote. For now, one-off sketches with the TikTok expert over at the Washington Post will do.

Sunday’s virtual Sondheim concert was the most cathartic experience of quarantine so far
Trump reportedly considered putting an ally willing to dispute election results in charge of the DOJ
Americans’ approval of Pope Francis drops to 53% amid more church sex abuse revelations
Rachel Mitchell says “reasonable prosecutor” wouldn’t bring a case against Kavanaugh — but it’s not ...
Outdoor brands are speaking up for national parks during the government shutdown. It’s a good busine...
Here’s the full list of 2020 Emmy nominees