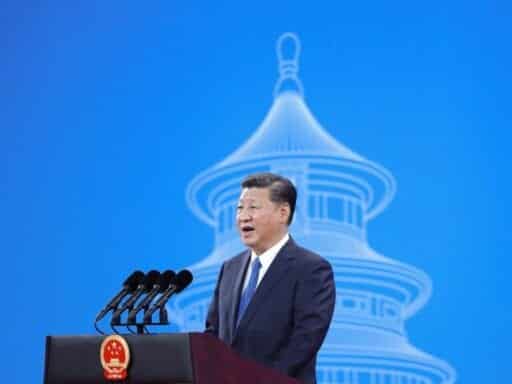 The head of Interpol vanished in China. He’s now resigned his post and is under investigation for corruption.

The strange story of the vanishing Interpol chief just got even stranger.

Days after Meng Hongwei, the president of Interpol, was reported missing in China, the Chinese government said on Monday that Meng was “under supervision” and being investigated on bribery charges. Meng, a Chinese national, has also resigned from his post “with immediate effect,” according to a statement from Interpol.

Meng, who led Interpol, an international organization that coordinates law enforcement agencies worldwide, traveled from France to China on September 29.

Meng’s wife went to the authorities in Lyon, France, on October 4 — where Interpol is headquartered — to say she hadn’t heard from her husband since he landed in China. Meng’s wife also told journalists Sunday that Meng had sent her a text message of a knife emoji before he vanished — which she interpreted as a sign that he was in danger.

According to the South China Morning Post, Meng is a former Communist Party official whose lost his position in the party last year.

Chinese authorities did not offer many details on what Meng is accused of or why he has been detained. The ministry of public security only indicated that he was being investigated for bribery and other crimes related to his “willfulness,” according to the Associated Press.

Meng helps set Interpol’s policies and agenda, but he doesn’t run the day-to-day operations of the world’s largest international police organization, which provides support to law enforcement agencies across 192 countries.

That job belongs to the Interpol’s Secretary General Jürgen Stock, according to NPR, who said in a statement that the agency was trying to get more information about Meng’s status from Chinese authorities. (Kim Jong Yang, of South Korea, will take over as Interpol president until a new one is confirmed.)

Interpol focuses on cross-border or transnational crimes, such as trafficking and, well, cases of missing people. It’s probably best known for issuing color-coded “notices,” or worldwide alerts for law enforcement. For example, a “red notice” is basically a flag that a specific agency is looking to apprehend someone.

Interpol itself can’t arrest people, but critics say some authoritarian countries (Russia and China, among them) abuse the system to target strong critics or dissidents by issuing wanted notices through the organization.

China has also used Interpol to identify allegedly corrupt officials. That led to some speculation that Meng might have been ensnared in an anti-corruption investigation — a suspicion that was ultimately confirmed.

Chinese President Xi Jinping has recently presided over a sweeping anti-corruption crackdown, which he used to help consolidate his power earlier this year. Officials who are targeted by the anti-graft campaign often vanish for weeks or months.

But it’s a particularly peculiar plot twist that Meng himself got caught up in such a crackdown. China had cheered his ascension to the top of the international agency when he took over in 2016, a sign of its growing global clout.

Meng’s detainment may ultimately end up being a setback for China’s aspirations to rise to global leadership. Julian Ku, a professor at Hofstra University’s Maurice A. Deane School of Law, told the New York Times that “the fact that Meng was ‘disappeared’ without any notice to Interpol will undermine this Chinese global outreach effort.”

“It is hard to imagine another international organization feeling comfortable placing a Chinese national in charge without feeling nervous that this might happen,” Ku said.

Meng’s disappearance also puts more attention on the Xi’s widening anti-corruption campaign in China, and the country’s draconian detainment and judicial processes. China has already garnered unwanted international attention this year for its mass detention of religious minorities, including the Muslim minority Uighurs.

The circumstances are vastly different from Meng’s, but both reveal the increasingly authoritarian policies of the Xi government — which are often at odds with China’s attempts to sell itself as a vital international partner.