How to browse a used bookstore 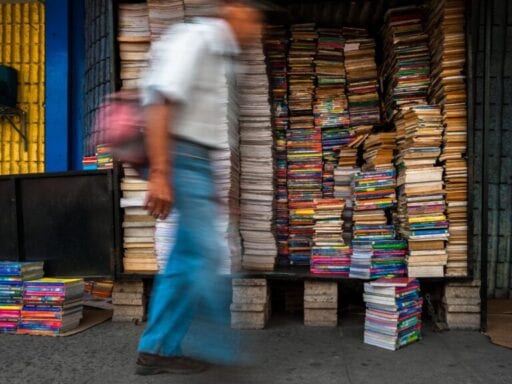 Share
Loading...
A Salvadoran man walks in front of piles of used books stacked in a box on the street in a secondhand bookshop on April 11, 2018 in San Salvador, El Salvador. | Jan Sochor/Getty Images

Welcome to Vox’s weekly book link roundup, a curated selection of the internet’s best writing on books and related subjects. Here’s the best the web has to offer for the week of September 29, 2019.

A Storm of Swords

Any hardcore G.R.R. Martin fans will tell you that A Storm of Swords is, above everything else, a book about how to throw a wedding. Your Red Wedding-themed wedding will have your guests raving, “This music is too haunting to dance to” and “Oh God, are you wearing chainmail under your dress?” and “Why would you do this?” And the answer is: because I am confused by books!

I think that writing about women goes hand in hand with horror writing. The female body is a nexus of pain almost by design (that by-now ubiquitous line from Fleabag: “women are born with pain built in, it’s our physical destiny”), but it is also potentially monstrous—an object traditionally subjugated, both for its presumed weakness and its perceived threat. The mutations and transformations of horror writing are uniquely qualified to evoke this: the difficulty and unreliability of the female body, its duality as an object both to be feared for and to fear.

Theirs is a kind of sick pop culture, constantly updated and running parallel to the mainstream, that fully accounts for apocalyptic race wars and nationalist-driven coups d’etat. Those steeped in this body of literature are primed to expect the moment where their rhetorical “shit” hits the real-life “fan.” Many hope this will happen in their lifetimes. Many others expect to participate in this great reckoning when it does. It’s all written down in the stories they tell one another.

Early cookbooks were fit for kings. In the 15th and 16th centuries in Western Europe, the oldest published recipe collections emanated from the palaces of monarchs, princes, and grandes señores. At this time, no one was trying to build a business out of selling cookbooks. Instead, they were often created within a court culture, partly intended as aidés-memoire for chief stewards and partly for royalty to demonstrate the luxury of their banquets.

In 2017, the Dallas food blogger Urvashi Pitre published the “Indian Instant Pot Cookbook.” By any measure, it was a hit, selling more than 100,000 copies.

But under the contract she signed with her publisher, Callisto Media, Ms. Pitre received no advance, the payment often given to an author when a book deal is signed. Callisto had asked her to develop 50 recipes in three months, but offered no budget for recipe development or testing. She said it takes her 12 hours to perfect a single recipe, and her grocery bill when testing is around $1,500 a month.

She fronted all those costs. Over the last two years, Ms. Pitre said she has made $15,000 — minus the cost of her expenses — solely from milestone payments, fixed bonuses given out if book sales exceed a certain number.

Next month New York Review Book Classics, a.k.a the thinking person’s book series that also looks great on Instagram, will publish a collection of her magazine articles. “I Used to Be Charming: The Rest of Eve Babitz” is the publisher’s third title exhuming the work of a voluptuous voluptuary with fizzy prose who once announced to her mother that “adventuress” might be her career choice.

Along with the chillier and more established Joan Didion, Ms. Babitz was a woman sending dispatches from the front lines of 70s era West Coast bohemia, gently satirizing the incestuous music and art worlds of Los Angeles. But she seemed to be having lot more fun than Ms. Didion: she wasn’t just at the party; more often than not, it seemed, she was the party itself.

We behave as if [we] don’t want to be known by one another, but we sometimes seem oblivious to the idea that we spend our days feeding ourselves into a great engine of knowing, one that believes it knows every single thing about us: our tastes, our opinions, our beliefs, what we’ll buy, who we’ll love, where we’ll go. The unseen actors who harvest this knowledge not only hope to know us perfectly but also to modify us, to their own ends. And this essay, too, will no doubt enter that same digital maw, and be transformed from ideas to data points, and responded to, perhaps, with a series of pat phrases, first spotted by the machine, then turned viral, and now returned to us as if it were our own language. “I just can’t with Zadie Smith right now,” or else “This Zadie Smith is everything,” or—well, you know the drill. We’ve gotten into the habit of not experiencing the private, risky act of reading so much as performing our response to what we read, which is then translated into data points.

I was hired as an assassin. You don’t bring in a 37-year-old woman to review John Updike in the year of our Lord 2019 unless you’re hoping to see blood on the ceiling. ‘Absolutely not,’ I said when first approached, because I knew I would try to read everything, and fail, and spend days trying to write an adequate description of his nostrils, and all I would be left with after months of standing tiptoe on the balance beam of objectivity and fair assessment would be a letter to the editor from some guy named Norbert accusing me of cutting off a great man’s dong in print. But then the editors cornered me drunk at a party, and here we are.

I’ve learned to treat a visit to a used bookstore less like a treasure hunt and more like a nature walk, with plenty of chances to enjoy myself along the way. Although searching for specific titles or authors has led to disappointment, curating a mental list of topics I can’t get enough of—New York in the 40s, the Beat generation, memoirs by female rock stars—gives me a place to start and regularly leads to happy surprises, especially when I look across genres.

Why Vienna opera singers are ready to risk their lives to perform in a pandemic
The long list of contenders for Kamala Harris’s Senate seat, explained
The Supreme Court’s legitimacy crisis is here
Pete Buttigieg has been criticized for his handling of policing. He hopes his criminal justice plan ...
Texas Air Force veteran's campaign ad goes viral
Jeremy Corbyn is the UK’s Bernie Sanders — and wildly unpopular. Could he still become prime ministe...