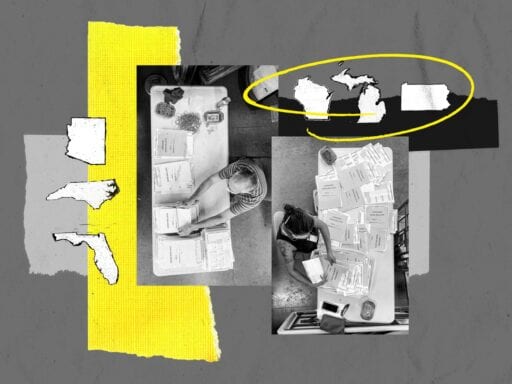 Poll closing times in key states, and what to expect from the count.

Election Day is finally here, and as polls begin to close in various states Tuesday evening, the country will wait anxiously to see whether President Donald Trump or former Vice President Joe Biden wins the election.

But the unprecedented number of mail-in ballots due to the Covid-19 pandemic — and the partisan polarization of mail voting, due to President Trump’s criticism of the practice — means there will be some unique challenges in tallying initial results this year.

For instance, Florida, Georgia, and North Carolina are expected to report early and mail-in votes quickly, meaning Biden could appear to have a large lead initially that dwindles as in-person ballots are counted. The reverse may be true in Pennsylvania, Michigan, and Wisconsin, which did not begin processing their mail-in ballots until this week and may therefore be slower to count. So be patient: Don’t get carried away by how it’s looking early.

Election-calling experts like those who work for the Associated Press, major TV networks, and Decision Desk have been aware of and preparing to meet this challenge for months. Vox uses the Decision Desk team to call elections, and you’ll be able to follow the results for the presidential, Senate, and key House races on our site.

Here’s an hour-by-hour guide to what we’re likely to see on election night. This post will focus on following the presidential and Senate results, but for a broader overview of everything on the ballot this Tuesday, check out Daniel Nichanian’s site, aptly named “What’s on the ballot.”

The first poll closures will be at 6:00 pm Eastern, in parts of Kentucky and Indiana, and some votes may start to be reported shortly afterward. Neither of these are presidential swing states, but election wonks will study their counts closely in hopes of reading tea leaves on how Trump might perform in similar regions. The Senate contest pitting Majority Leader Mitch McConnell (R) against Amy McGrath (D) has also been closely watched, though McConnell is the expected favorite.

At 7:00 pm Eastern, polls will close in the first couple of swing states — Florida (except for the Panhandle) and Georgia. Both of these states are expected to release a large share of their mail and early in-person vote totals relatively quickly. And they’re both pretty close to must-win states for Trump. But their earliest totals may be overly rosy for Biden, if the in-person vote (expected to favor Trump) is slower to be reported. Wait until analysts get a sense of how the in-person vote looks before jumping to conclusions.

Georgia features two key US Senate races. South Carolina’s polls also close at 7 pm, and while the state is expected to go for Trump, Sen. Lindsey Graham (R) is fighting off a challenge from Jaime Harrison (D).

Then, at 7:30 pm Eastern, polls close in two more important swing states: North Carolina and Ohio. Again, most of Trump’s paths to victory depend on him winning both of these states. Both are expected to be relatively quick in counting, with large batches of the early votes released early. If Trump is in trouble, we may get a sense of that pretty quickly. North Carolina also has an important Senate race between Sen. Thom Tillis (R) and Cal Cunningham (D).

The New York Times Upshot is going to have its infamous needle — which calculates who is likely to win a state based on where the unreported vote is — for three states this year: Florida, Georgia, and North Carolina.

At 8:00 pm Eastern things will really start to heat up, with polls closing in more than a dozen states, as well as in the Florida Panhandle. (The Panhandle is dominated by Republicans, so once it starts reporting its vote totals, Trump will improve in the Florida vote count.) Polls in the vast majority of Texas will also close, and large batches of votes are expected to be reported relatively quickly there.

At this time, polls also close in Pennsylvania and in most of Michigan, but it is unclear how quickly we’ll get their results. They did not have a weeks-long head start in processing mail-in ballots or in-person early votes — two policies that facilitate a quick count — so we’re likely to wait a while for results in these states. If in-person ballots are counted first, these states could look overly rosy for Trump. Wait for the mail-in ballots to come in before jumping to conclusions.

As for the Senate races, polls close at this point in Maine, where Sen. Susan Collins (D) is facing Sarah Gideon (D). Michigan, Texas, and Kansas have notable Senate races as well.

By 9:00 pm Eastern most states have closed their polls, but they may vary widely in how quickly they report their counts. Arizona, Minnesota, and Wisconsin are the significant swing states that close their polls at this time (as well as the remainder of Texas and Michigan). Arizona is planning a large release of early vote numbers pretty quickly. Minnesota is also expected to count quickly. Wisconsin may take longer, since it was not allowed to process mail-in ballots before Tuesday, although reports suggest results may be ready early Wednesday morning.

The 9 pm hour is also notable because, in 2016, it’s when election wonks first got the sense that the Midwest (and therefore the presidency) was tipping away from Clinton; the numbers coming in from Michigan and Pennsylvania at this point weren’t what she needed. This year, both states may be slow at counting mail votes, though, so their results could take more time.

At 10:00 pm Eastern, polls close in the final swing states, Iowa and Nevada. By this point in the night we should have a sense of whether the presidential contest is looking like a Biden landslide, or whether it looks much closer and could go down to the wire. For the Senate races, Iowa and Montana both feature high-profile contests — Sen. Joni Ernst (R) against Theresa Greenfield (D) in Iowa, and Sen. Steve Daines (R) vs. Gov. Steve Bullock (D) in Montana.

Polls close in the rest of the continental US (most notably California) at 11:00 pm Eastern. Then at midnight, polls close in Hawaii and most of Alaska (which has a contested Senate race).

When will we know who won?

It really depends on how close it is, and how the key swing states fall.

Polls show Biden competitive in important swing states that will count much of their vote quickly, like Florida, North Carolina, and Georgia. These states are all hugely important to Trump’s electoral math — he really can’t afford to lose any of them, unless he makes truly unexpected gains elsewhere. So if any of these states are called for Biden, he’ll become the favorite to win the presidency.

But if all three of this trio remain uncalled because they’re too close, or if they’re called for Trump, then we could be in for a long count.

If the election comes down to Pennsylvania, Michigan, and Wisconsin, things could take a while. Republican legislators blocked efforts to allow significant advance time to process mail-in ballots in these states, so it could conceivably take days to determine the winner.

It is also possible, though, that we’ll get a clear sense of how things are going relatively early Tuesday night.

In 2016, for instance, Trump was officially called the winner by TV networks around 2:30 am Eastern. But the first major indication that Clinton was in deep trouble came during the 9 pm Eastern hour, as results in Michigan and Pennsylvania showed Trump outperforming expectations. Wisconsin soon joined them, and by the 11 pm Eastern hour, it seemed pretty clear where this was going (the New York Times’ needle, for instance, gave Trump more than a 95 percent chance of winning by that point).

The reason it became clear the election was tipping toward Trump was because Clinton lost most of the toss-up swing states (like Florida and North Carolina) and was also losing not just one, but three of her “blue wall” states. Trump only needed to win one among Michigan, Pennsylvania, and Wisconsin — and he was on track to win all three. His margins of victory in the latter two, while small, were big enough to make those states extremely unlikely to flip in a recount.

And yet, another possible scenario is that things come down to just one state that has an extremely close margin — like Florida in 2000. If so, buckle up for a contested election aftermath.

A guide to how 2020 Democrats plan to fight climate change
12 great movies about moms, from the heartwarming to the truly bizarre
Netflix’s Death to 2020 rehashes jokes we all spent the last 12 months making
It Chapter Two is fun and scary, but lacks what made Chapter One great
Why the coronavirus outbreak increasingly looks like a pandemic
A top Pentagon official severely undercut a Trump impeachment talking point