How to protect your books with medieval curses 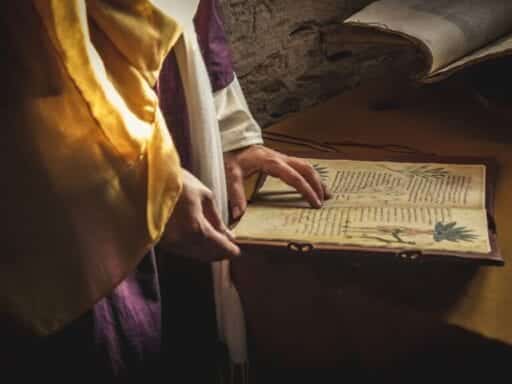 Welcome to Vox’s weekly book link roundup, a curated selection of the internet’s best writing on books and related subjects. This week’s edition is a little longer than usual, because it will have to hold you for two weeks — I’ll be gallivanting around on vacation next week. So in the meantime, here’s the best the web has to offer for the week of October 6, 2019.

The Nancy Drew books make a case that you can be a complete nonentity — okay, a privileged nonentity — and still do tons of courageous, adventurous, altruistic stuff. Her glamour isn’t to be found in her adjectives — tactful, cordial, serious — but in her verbs. She’s constantly jumping, springing, racing, clambering, scrambling, darting after shadowy crooks, and zooming away in the blue convertible.

For much of its 2000-year history, Mosul has been regarded as an important centre for Arabic literature, poetry and songs. Literary pioneers include Ibrahim al Mausuli, a Persian poet and singer who rose to fame after fleeing to the then liberal city of Mosul in the 6th century AD. Al Mausuli is referred to in ‘One Thousand and One Nights’ popularized by Lawrence of Arabia who passed through Mosul thirteen centuries later.

The destruction of Mosul’s cultural heritage has been well-documented, with UNESCO pledging to rebuild the Museum of Mosul, the Nabi Younnis Shrine, the Al Hadba Minaret.

Both as a reader and writer, Tokarczuk brings a set of lofty expectations to a novel, which she regards as the highest literary form. “I expect novels, including crime fiction, to be multifaceted and to work on many planes,” she says. “A novel should tell a story, be a pleasure to read, and at the same time it should be thought-provoking, even a bit instructive. I still believe in the social function of literature, that literature can change things, it can have an influence on reality, or even generate it. I fully realized that many years ago, the first time a publisher sent me a sales report, and I read with pride and disbelief that tens of thousands of people had bought one of my books. It made me aware that what I say matters.”

The Roman poet Catullus is the father of dirty books. Some readers loved his earthy sexual imagery, others less so, but he didn’t have much truck with critics, attacking them in a poem so filthily abusive it wasn’t translated literally until the 1970s: “Up your ass and in your mouth / Aurelius … / Calling me dirt because my poems / have naughty naughty words in them.” I feel we need more of this engagement between writers and critics.

I aimed to resist collage after that, but came back to it for the internal monologue in Ducks, Newburyport, where I realised each half-sentence could be emphasised, contradicted or satirised by the preceding and following phrases. I tried never to let these jumps in content become too puzzling. I didn’t want to write an unreadable book, but one that could stand on its own two feet without explanation. And here I am explaining it!

When Trump apostrophizes his leftist critics, he is speaking to a group of neurotic hecklers obsessed with rules and decorum, with telling him that he’s wrong. And then he pushes ahead. Sure, he deleted his “Moot” tweet, but when he reposted the denial, the only thing he corrected was the spelling. The idea of ordering the Border Patrol to shoot people was not, it seems, a typo. It is fruitless to tell a bully that, actually, it is only because he is holding your hand and smacking you with it that you could be said to be hitting yourself. When he says, “stop hitting yourself,” you should hit him back.

Last weekend, my 2½-year-old daughter walked up to me at the library with a board book in her hand: Feminist Baby Finds Her Voice!, by Loryn Brantz. The book was full of bright, cute illustrations and girl-power messages—“Feminist babies stand up tall! Equal rights and toys for all!” My daughter stood by my knee patiently as I read the book aloud. She asked no questions, made no comments, and was off to the train table before I closed the last page. I was left sitting there, wondering who the heck this book was supposed to be for.

Book clubs also keep loyal readers inspired, including a Book of the Month subscription that includes a signed first edition of the shop’s choosing and an unclassifiable club that includes books that do not fall into the traditional mystery genre. For example, Rob Hart’s “The Warehouse,” which takes place in a near-future dystopian world where a company has become a totalitarian force, would not traditionally be shelved in a bookstore’s mystery section, but has been extremely popular in The Mysterious Bookshop.

“The poor Girls & their Teeth!” writes Austen at one point. “Lizzy’s were filed & lamented over again & poor Marianne had two taken out after all … we heard each of the two sharp hasty screams.” The dentist, she adds, “must be a Lover of Teeth & Money & Mischief” – she “would not have had him look at mine for a shilling a tooth & double it”.

Viewers in the 21st century want—demand—to see a version of the past that stresses its similarities with the present day, Blackburn said. They want to see Austen rescued from tweeness and coziness. Today’s comparison for the turmoil in Sanditon, then, would be to Brexit, “with huge economic change dislocating people,” he added. In the new settlement described by Austen, “there is huge economic unease, particularly among the upper class, about industrial change.”

For Blackburn, every adaptation is inevitably a reflection of its adapters, and the time in which it is made. “You can’t take the observer out of the equation,” he said. At the same time, though: “Sex, pain, rage, envy … These things are timeless.”

News reports of the allegations [of sexual misconduct by Junot Díaz] spread the same week Professor Celis’s class was discussing Mr. Díaz’s novel “The Brief Wondrous Life of Oscar Wao.” She had planned for her students to discuss the novel’s themes, including toxic masculinity and abuse of power. Suddenly, she said, it seemed those subjects had come to life.

Her students were disheartened. Professor Celis had previously brought Mr. Díaz to campus to address students on navigating professional success as a man of color. Now she felt torn about using his most famous book — and still has not made up her mind about whether to assign it this year.

“There are only two possible stories,” goes the old adage, frequently attributed to John Gardner: “a man goes on a journey, or a stranger comes to town.” It’s the sort of thing I’ve said casually to my students over the years as a way to help us organize our ideas, but it strikes me now that every immigrant story I know of falls into one or—in most cases, both—of those archetypes: a character leaves behind a place—a life, really: a home, a language, a personhood—to embark on a personal quest; or a character enters an unfamiliar country, where they are a stranger to most, and finds they must navigate its codes and culture in order to survive. The leaving behind is as much a theme in these stories as is the navigation, and the adventure is as much a loss as it is a journey of discoveries.

“For him that stealeth, or borroweth and returneth not, this book from its owner, let it change into a serpent in his hand & rend him. Let him be struck with palsy & all his members blasted. Let him languish in pain crying aloud for mercy, & let there be no surcease to his agony till he sing in dissolution. Let bookworms gnaw his entrails in token of the Worm that dieth not, & when at last he goeth to his final punishment, let the flames of Hell consume him for ever.”

Why Senate Republicans are split on the next stimulus bill
The Snowman is a magnificently, transcendently awful movie
The need to read black literature that’s not just about black struggle
Netflix’s Love Wedding Repeat is a frothy, comfort-food rom-com
Trump and Steve Bannon want to turn a US-funded global media network into Breitbart 2.0
Walmart paid $300 million for Bonobos. Two years later, the men’s fashion brand is laying off staff.