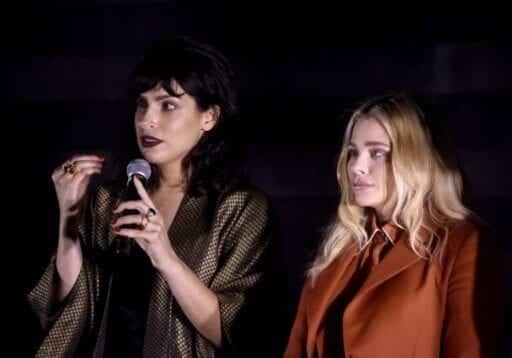 The novel is about a young Montana woman who, after she’s caught sleeping with another girl, is sent away to a fundamentalist Christian gay conversion therapy retreat. And while Akhavan is bisexual and has had relationships with women, she grew up the child of Iranian immigrants in New York, which is not exactly the desolate middle of the country where Cameron hails from.

But Cameron Post is lively and funny and deeply sympathetic to all of its characters. It avoids the problems of patronizing to Christian audiences or, worse, satirizing them without understanding their point of view. But it also doesn’t collapse into thinking that what happens to Cameron and the friends she makes at the retreat isn’t completely horrifying. It’s a tricky balance, and it’s one Akhavan and her co-writer, Cecilia Frugiuele, manage with aplomb.

So when Akhavan joined me for the most recent episode of my podcast, I Think You’re Interesting, I wanted to ask both about her background and about how that background prepared her to tell this particular story. And I was surprised to hear her say, “I think it’s better to be from a world to make [stories about it]. I don’t think it’s a positive that I made this film and I’m not evangelical.”

For the rest of this segment of our conversation, read on for a version that’s been lightly edited for length and clarity.

You mentioned that you’re the child of Iranian immigrants, and that’s an interesting intersection to be in, especially at this point in American history. How do you feel that experience has informed your artistic work?

Anybody growing up their parents’ child dictates everything they do. If they’re an accountant, growing up their parents’ child made them an accountant. I am so deeply influenced by being the child of immigrants from Iran. It is my culture. And also, it is not at all. When your family is from another country, you’re neither here nor there. I don’t feel American, and I don’t feel Irani. When I’m around other Iranians, they’re like, “You don’t know shit.”

Here’s the thing: I feel nostalgic and homesick for a place that doesn’t exist, because also my parents were raised in pre-revolution Iran, and that’s a very different world, a very different language, a very different manner, than Iran today. So you’re kind of from nowhere, like a fictional place that just exists in your living room. And that world is one you share between yourself and your parents and your brother and then no one else.

What I’m getting at is that in fundamentalist Christian culture, there’s this idea that you are in the world, but not of the world. By virtue of how existence works, you have to live on this planet, but at the same time, you have to be part of a higher calling that puts you constantly outside of secular society. I don’t know how true that works out for anybody, but I was sort of plagued by that growing up. I’m wondering if you found sort of a connection with that idea of, yes, evangelical Christians have immense power in the United States, but they see themselves as outsiders.

By not part of it, you mean that they’re on a different plane, because the word of God is what they’re executing?

Yeah. It’s like you have to live in a world where, for instance, you see in advertising there’s a lot of sexualized imagery. And that was always a problem [for us], that you had to be around that and see that.

Your moral compass is just different, and I agree with that. I relate to that. I see the world from this really different perspective of someone whose parents had survived war and fought for them to be there. In my case, it was just being so grateful to be at the table and so grateful to be able to be listened to and to be allowed to theoretically exist the way men do in this country. Practically, I don’t think that happens, but the hope is there. The idea is there.

The flip side of that is: You didn’t grow up evangelical Christian. What do you think benefits, in terms of the art, from being an outsider, being an observer of a culture you don’t know a lot about?

I don’t know. Actually, I don’t think it’s great that I’m not evangelical and I made this film. That was one thing I had a real sensitivity around and felt guilt for and tried as much as possible to be fair and involve people who knew that world.

I think it’s better to be from a world to make [stories about it]. I don’t think it’s a positive that I made this film and I’m not evangelical. I think representation counts. But at the same time, my in-point was a little different, and what attracted me to this story was growing up queer. That was more important to me than the other elements, and I just felt like it was my responsibility to be fair, preserve the dignity of evangelical Christians, and do my research.

When you work on something like this, how do you correct for blind spots where you might have them, in hiring the right people to check you where you need to be checked?

That’s it. You just hire the right people, and you’re constantly having a dialogue over authenticity and representation. Adam’s character, played by Forrest Goodluck, is Native, Lakotan, and he’s two-spirit. I didn’t know what two-spirit was when I read the book, and it taught me that. And I felt like, okay, if we’re going to represent this thing I’ve never seen onscreen before, I should talk to some two-spirit people.

Two-spirit is a third gender in the Native community. It’s neither male nor female … and it literally means the male part of you is being killed by the female part of you, and they’re at odds with each other. It sounds like a queer concept. It seems like neither gay nor straight. It’s its own thing, a third gender.

I love that I’m like, “Well, I educated myself by talking to two-spirits, and two years later, I’m like, ‘Wha?’” But at the time, Forrest and I met with the two-spirit community in New York, and they told us how they saw it. They said it a lot more articulately, but also what life was like as someone who’s two-spirit. It’s a different social standing in the Native community. So that was it. I asked [someone who is two-spirit] to look at the script and the parts where we discussed two-spirit, and he’d change the dialogue accordingly. That was great. I was really glad I got someone’s point of view who knew that world. I had just read about it in books.

For much more with Akhavan — and a conversation with Ron Stallworth, the man whose life story inspired the new film BlacKkKlansman — listen to the full episode.

Donald Trump and the crisis of elite impunity
Pete Buttigieg’s favorite author would maybe hate Pete Buttigieg
Lonely Island’s Palm Springs is a funny existential comedy about 2 dirtbags who find each other
A new poll shows a startling partisan divide on the dangers of coronavirus
John Hickenlooper: How come we’re not asking women whether they’re willing to put a man on the ticke...
How we know ending social distancing will lead to more deaths, in one chart