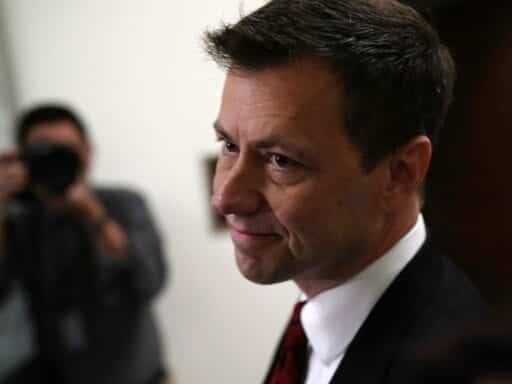 Republicans think he tried to “stop” President Donald Trump during the campaign. Now he has a chance to explain himself.

Peter Strzok, the FBI agent President Donald Trump says was at the center of a secret FBI conspiracy to thwart Trump’s presidential ambitions and elect Hillary Clinton, will testify publicly for the first time on Thursday.

Strzok was an investigator on special counsel Robert Mueller’s investigation into possible collusion between the Trump campaign and Russia. He also led the FBI’s investigation of Hillary Clinton’s private email server.

During the 2016 presidential campaign, Strzok exchanged a series of text messages with Lisa Page, an FBI lawyer with whom he was having an affair, that were critical of Trump. In one particularly controversial exchange, Page texted Strzok that she was worried Trump might win. “No. No he won’t. We’ll stop it,” Strzok reassured her.

Trump and many of his Republican allies have seized on these text messages as proof of anti-Trump bias in the FBI and to discredit the Mueller probe — the investigation Trump calls a “Rigged Witch Hunt.”

Trump has called Strzok a “sick loser” and referred to Strzok and Page as “incompetent & corrupt” and “minions” of former FBI Director James Comey. Rep. Trey Gowdy (R-SC) said in June that Strzok’s “manifest bias trending toward animus casts a pall on” the Mueller investigation.

Now, Strzok will finally get a chance to tell his side of the story publicly.

Strzok is set to testify before a joint session of the House Judiciary and House Oversight Committees on Thursday, July 12, at 10 am Eastern.

This isn’t the first time Strzok has appeared before Congress about these issues, though. Back in June, Strzok met with those same two committees behind closed doors for a marathon 11-hour session.

But this will be Strzok’s first public testimony in front of Congress since the revelations about his texts. Republicans and Democrats will get another chance to ask Strzok anything and everything they want — and this time it’ll be live in front of the entire nation.

It’s sure to be a political spectacle. Here’s how you can watch.

How to watch the Peter Strzok hearing

Where: Live for free on the House Judiciary Committee’s website or on C-Span.

When polls close on March 10 — and when we might get results
3 big health care stories to watch for in 2020
How to find fitness motivation after this train wreck of a year
Scientists are divided over whether climate change is fueling extreme cold events
In Dick Johnson Is Dead, a father and daughter imagine his death with humor and love
Herman Cain, 2012 presidential contender, dies after contracting Covid-19