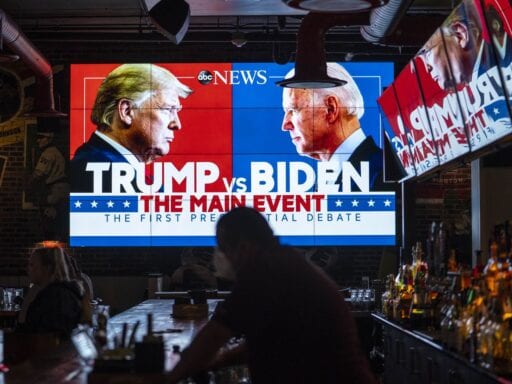 The final presidential debate and the mute button, explained.

Three weeks, a White House coronavirus outbreak, and a set of dueling town halls later, President Donald Trump and Democratic challenger Joe Biden are headed back to the debate stage for their second and final debate of the 2020 presidential election.

It’s a big deal, and thus you’ll be able to watch it essentially everywhere. Fox, ABC, NBC, and CBS will air it, as well as CNN, MSNBC, Fox News, CSPAN, Univision, and Telemundo. The debate will stream live on YouTube and can also be found on Apple TV, Amazon Fire TV, Roku, and for an audio version, on NPR.

Vox will also embed a livestream here closer to the debate start time.

There were supposed to be three Trump-Biden debates this election cycle, but the schedule got mucked up when the president contracted Covid-19. (He actually may have had it during the first debate in Cleveland, since it’s still not clear when he last tested negative before his diagnosis.) The Commission on Presidential Debates, which is in charge of organizing the events, tried to make the second debate virtual as a safety precaution. Trump declared he wouldn’t do it in that format, so it was canceled. Ultimately, he and Biden took part in separate town halls aired at the same time last Thursday.

This debate is on track to be a bit of a doozy. The Trump camp has already been complaining that Welker is going to be unfair to him. “She’s always been terrible & unfair, just like most of the Fake News reporters, but I’ll still play the game,” the president tweeted over the weekend.

After Welker announced the debate topics — fighting Covid-19, American families, race in America, climate change, national security, and leadership — Trump’s campaign manager, Bill Stepien, sent a letter to the debate commission complaining that they weren’t foreign policy-focused. He wrote that the topics were already discussed “at length” during the first debate and said the campaigns had previously agreed to the foreign policy theme.

Biden press secretary TJ Ducklo said in a statement that the campaigns and commission agreed “months ago” that the moderator would choose the topics and that the Trump campaign was lying to avoid talking about the pandemic. (What’s essentially going on here is that Trump wants to talk about conspiracy theories on Biden and his son Hunter, and some other fringe online theories, and Biden wants to talk about the coronavirus.)

The first debate had lots of interruptions, to the point that it was hard for the audience to follow what was going on and moderator Chris Wallace often seemed to have lost control. So this time around, the rules are getting a bit of an update. Each candidate will still be given two minutes to respond to the moderator’s initial question at the start of each segment — but now, while one talks, the other one’s microphone will be muted so he can’t interrupt. After those initial statements, they’ll get to duke it out. Will the change help? We’ll see.

The debate is still taking place in the midst of a pandemic. At least 11 Covid cases were linked to the first debate in Cleveland; hopefully this time around, that number will be zero, and everybody — including the Trump family — will keep their masks on.

We are in the final stretch

Thursday is just 12 days before Election Day, and it’s been a chaotic year leading up to it. Given the pace of news this election cycle, the wild churn of events will probably continue up to and potentially even past voting.

Still, one thing has remained relatively unchanged over the past few months: Biden is ahead in the polls. Then again, so was Hillary Clinton in 2016. And because of the Electoral College, winning by millions of votes doesn’t always mean winning the White House. But overall, Biden’s lead has been pretty substantial and pretty stable for most of the race.

According to a RealClearPolitics average of polls, Biden is up more than 8 percentage points nationally. A poll of likely voters released on Tuesday by the New York Times and Siena College found that Biden is ahead of Trump by 9 points nationally and found that even on the economy, where voters have generally rated Trump higher, he and Biden are now basically tied.

As Vox’s Dylan Scott recently wrote, Biden also seems to be doing pretty well in some important swing states, including Michigan, Pennsylvania, and Wisconsin, which helped swing the election in Trump’s direction in 2016. According to FiveThirtyEight’s averages of state polls, the race is very tight in places that in a better year for Trump would be safe bets, such as Ohio, Iowa, and Georgia. But as Scott noted, none of this means Trump can’t win, and things could ultimately break in his direction.

How could that happen? Well, the polls could tighten over the final weeks of the race, as undecided voters make up their minds, and perhaps as Republicans skeptical of Trump ultimately decide to stick with their party. Pollsters could also be missing some Trump voters, leading them to underestimate his support as they did in critical states in the 2016 election.

Trump appears to be at least somewhat aware the polls aren’t looking great for him and is making all sorts of efforts to turn the tide of the race.

Thursday’s debate will likely be the candidates’ final chance to make the case for themselves with such an enormous platform and audience. The first debate was such a mess, with all the cross-talk and interruptions, that it’s hard to believe many voters could have been swayed. Maybe the trusty mute button will render this debate different.

Shazam! is an unapologetically buoyant triumph of a superhero movie
A third of Americans might refuse a Covid-19 vaccine. How screwed are we?
Why Trump’s trade agenda might worsen America’s cheese glut
The EU condemns Trump’s travel ban and the NBA stops playing: Thursday’s coronavirus news
Scott Pruitt’s actions at the EPA have led to more than a dozen investigations
Why scientists are so worried about this glacier