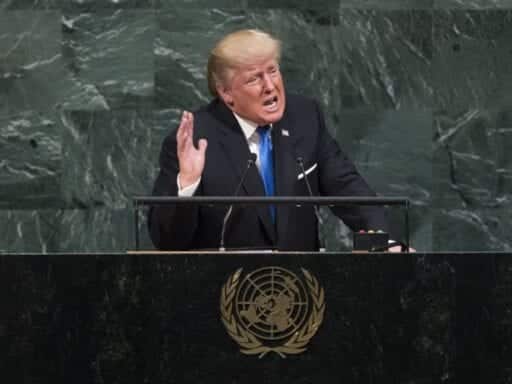 Will he threaten to “totally destroy” another country like last year?

President Donald Trump will give his second speech at the United Nations General Assembly on Tuesday at 10:15 am — and it could be one of his most important speeches yet.

The president has consistently railed against the world body for years, in part because he says the US pays too much for its operations. But it seems Trump will use the UN’s platform on Tuesday to defend his own foreign policy, rather than bash the organization.

In a Fox News interview on Sunday, National Security Adviser John Bolton said Trump’s speech will focus on “American sovereignty” and “how that fits into America’s place in the world as a whole.” In other words, Trump will expand upon his “America First” foreign policy and how he thinks it’s working as he approaches two years at the White House.

But most people watching will be waiting to see if Trump is as bombastic as last year, when he threatened to “totally destroy” North Korea if it continued to threaten the US or its allies. His rhetoric will probably be less fiery because relations with Pyongyang have improved markedly since last year, especially since Trump’s Singapore summit with North Korean leader Kim Jong Un on June 12.

Trump may, however, use his speech to bash Iran. Trump withdrew the US from the Obama-era Iran nuclear deal in May and has aimed to put economic and political pressure on Tehran since. He’ll even lead a session of the UN Security Council — the organization’s most prominent decision-making body — on Wednesday that will include Iran’s nuclear and regional ambitions.

So while Trump may be more subdued at the UN this year, it will make his speech no less interesting to watch.

Watch: You can watch online on Vox’s Facebook or Twitter pages, C-SPAN, the UN’s live feed, the White House’s live feed, or likely on all major news networks.

The brief hype about a John Kerry presidential run, briefly explained
The profound grief and terrible puns of Harrow the Ninth
Trump could be in a lot of legal hot water if he loses the election
The Navy grants the first exception to Trump’s transgender military ban
Now is the perfect time to discover children’s fantasy author Frances Hardinge
A post-debate focus group of undecided voters shows that Kamala Harris faces an uphill battle