How to write a great song, according to singer-songwriter Neko Case 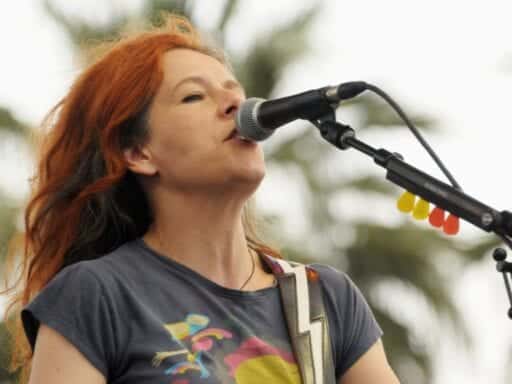 “[Songwriting] is work. Experience, selection, taste. None of those things are something that happens to you. You’re not just an antenna.”

Neko Case’s nearly 20-year-long career has given us some of the best songs of that time frame, chronicles of a country and world that often seem to be plunging into chaos but always manage to just barely avoid doing so. Her solo albums, including the brand new Hell-On, have yielded many of those songs, but so has her work as a vocalist with the indie-pop group The New Pornographers and as part of a trio of singer-songwriter superstars with K.D. Lang and Laura Veirs.

They tell stories more than anything else. They’re tiny snapshots of people who might be at the end of their rope, or trying to find a new way forward. They’re often just quick observations of people Case seems to have seen on her travels throughout the country and the world.

I am not a songwriter, despite childhood me’s best efforts. But I’ve always been fascinated by the process of songwriting and how musicians take free-floating ideas and pare them down to something emotionally affecting. Thus, when Case joined me for the latest episode of my podcast, I Think You’re Interesting, I wanted to ask her about her process and how she crafts her songs.

That conversation took up a lot of our discussion, but I wanted to excerpt this snippet — lightly edited for length and clarity — about how she channels her influences, and why songwriting is work.

I don’t write music, but I do write other stuff, and I distinctly remember when I realized I was writing my own stuff and not just trying to copy my influences. Did you feel a similar moment to that in your own music?

I don’t know if I was trying to separate myself. I think that I started sounding more like myself when I started playing guitar even very rudimentarily.

I think I was about 30 when I started playing guitar, and I realized I was more in charge of my phrasing and my cadence. I realized I didn’t necessarily want to go verse-chorus-verse-chorus. I wanted to tell a story, and maybe the chorus wouldn’t repeat.

I guess that’s where an influence comes in. Early Queen records I love, and I love that Freddie Mercury will do a thing where the greatest hook in the song will only happen one time, and you go back and listen again and again. Especially Queen II or Sheer Heart Attack — there’s a lot of those moments on those. And it’s written like classical music, where things happen that don’t happen again. It’s not cyclical. It’s a story that’s happening. It’s more linear.

How do you make telling a story through a song work? You don’t have a lot of space — five minutes at most.

I think it comes from leaving it open enough to where your audience can come in and kind of wear it like a vest. They get to insert themselves in there somehow, insert their own details.

I try to make things not too anchored to one time or place. I maybe will have telephones, but I won’t have pagers or cell phones, for example, or internet. There’s something about certain technologies I leave out that leaves things more open-ended. That’s such a small example, and that’s not, like, a rule where that’s how you do those things. I was looking more at classic songwriters who write songs about love a lot, which is something I don’t really do. In those open-ended Cole Porter songs or something, there’s a few little details that really stab you, and then it’s open and sing-song-y. It’s like beautiful Polaroids.

You know how a lot of times you’ll see a trailer for a movie, and it doesn’t give you the story, but it gives you an idea of the story, and it seems really compelling. You really want to go see it, and you go see it, and the movie’s a disappointment. I’m kind of a big fan of the trailers, personally [laughs], because you can decide what happens. You see the interesting parts, and then it’s kinda yours.

Do you think a lot about which details to include and which not to include? Or is it more intuitive? Do you struggle with the cutting-room floor?

Oh yeah. There are ideas in the beginning that I’ll be really married to and then have to completely cut them out at the end. In order to make something that’s truly yours, at least in my experience, you really have to push an idea, and you have to push it until it’s kind of uncomfortable.

I went to art school for a long time, and I think that’s the main thing I picked up there. You push an idea, A, and B, at the end, you ask yourself, “Does this particular piece of work” — be it a song or a painting or a sculpture or whatever it is — “say to my audience what I was trying to say? Or ask my audience what I was trying to ask?” If you can get within 80 percent of that, it seems like you’re kind of there.

It doesn’t always work, obviously. I take a lot more time than a lot of people do to finish things. I go down a lot of rabbit holes, and I live with things for a while, just to make sure that I’m okay with those things, which can be a money pit sometimes. But I don’t know how long I’m going to make records, so I want to make sure I do a good job. And I pay for them myself, so I have the luxury of being in charge for that. I hear songwriters, like, [affects airy voice] “I’m just a vessel for the idea. It just comes to me!” No. You’re not. It’s work. And it is experience, selection, taste. None of those things are just something that happens to you. You’re not just an antenna.

For much more with Neko Case, including her thoughts on writing Hell-On in the current political climate, her growing awareness of the community of women in the music industry, and her love of the band Heart, listen to the full episode.

Saudi journalist Jamal Khashoggi’s mysterious disappearance, explained
Who was John McCain? The best answer is in this 18-year-old David Foster Wallace essay
Why did it take so long for Les Moonves to leave CBS?
Greg Gianforte flips Montana governorship to Republicans
Bill McKibben has been sounding the climate alarm for decades. Here’s his best advice.
Covid-19 is disproportionately taking lives of black people