How Trump could blow up the NATO summit 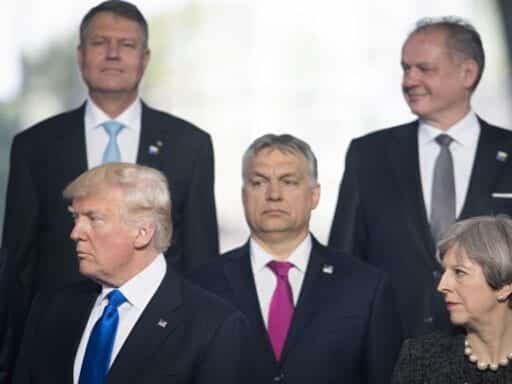 US and NATO officials are worried. Very worried.

President Donald Trump’s upcoming NATO summit in Brussels isn’t supposed to be this interesting — or frightening.

In normal years, the biennial meetings of the leaders of the military alliance’s 29 member countries are mind-numbingly boring, filled with hours-long meetings on sexy topics such as “readiness initiatives” and “command structure reform.”

At the end, the leaders all sign a “joint communiques” making generic declarations about “the vital transatlantic bond” and “Alliance cohesion.”

But this is not a normal year — and Trump is not a normal president. Both US and NATO officials tell me they’re terrified that Trump might completely bash allies and praise Russia during the two-day summit — possibly even blowing up the Western military alliance that has served as a bulwark against Russia since the Cold War.

“These are not good times, these are not normal times,” a senior NATO official told me. “We’re not used the leader of the alliance not wanting to play a leadership role.”

Trump has long railed against NATO, calling it “obsolete” and criticizing the other member countries for not paying their fair share. He also famously refused to commit to Article 5 of the NATO charter last year — the provision at the heart of the NATO alliance, in which countries promise to treat an attack on any NATO country as an attack on all of them, and to respond accordingly.

He eventually did grudgingly commit to Article 5 several months later, but he has continued to harshly criticize the alliance, deeply worrying other members.

On Tuesday, the day Trump flew to Europe for the summit, the president tweeted: “NATO countries must pay MORE, the United States must pay LESS. Very Unfair!” Four days earlier at a rally in Montana, Trump used more forceful language. “They kill us,” he said, adding “we’re the schmucks paying for the whole thing.”

Trump even sent the leaders of NATO members personalized letters calling on them to contribute more money.

All of this is why NATO allies — and even some Trump administration officials — are worried that Trump might go off script and severely damage the alliance.

“There’s a fair a bit of anxiety here,” a US official, who wasn’t authorized to speak publicly about preparations for the summit, told me.

“A lot of people have put in a lot of work to make this a successful event,” the official said, “but we all know none of that will matter much if the president decides he isn’t satisfied.”

Every president has criticized NATO. Trump questions its entire existence.

Trump isn’t the first president to complain about other NATO countries’ military spending: Everyone from John F. Kennedy to Barack Obama criticized NATO allies over this, and most experts told me allies should contribute more to defense.

Only the US and three other countries spend at least the expected 2 percent of GDP on defense, although NATO leadership claims that number will soon climb to eight members.

The alliance has also faced serious challenges in the past: NATO countries were heavily divided during the Suez Canal war in the 1950s and over the decision to invade Iraq in the early 2000s.

But what those tense periods all shared was America’s backing and appreciation for the alliance, along with a strong repudiation of illiberal values.

NATO, which stands for the North Atlantic Treaty Organization, was formed in 1949 by the United States, Canada, the United Kingdom, France, and several other European countries. The goal was to create a powerful military alliance to contain Soviet expansionism after World War II.

While NATO leaders wouldn’t say this publicly now, the alliance still exists mainly as a way to deter Russian aggression on the European continent.

That’s why it bothers NATO members when Trump cozies up Russian President Vladimir Putin — who seeks to undermine and divide the alliance — and even plans to meet with him only four days after the summit.

“This is the first time, that I’m aware of, an American president was not unequivocal about our commitment,” retired Lt. Gen. Ben Hodges, who until December 2017 led the US Army in Europe, told me. “That’s different.”

“I’m very pessimistic,” she told me. “Trump seems intent on being the skunk at the garden party.”

How Trump could blow up the NATO summit

They’re where the countries hammer out super important details about everything from troop levels in Afghanistan (where NATO countries are still fighting alongside America), how to protect vulnerable countries on the border with Russia from possible aggression or even invasion, and how to deal with terrorist groups trying to destabilize Europe, and whether additional countries should be let into the 29-member alliance.

But Trump isn’t known for his penchant for long, detailed policy discussions. He gets bored easily and likes to be the center of attention.

“Trump seems intent on being the skunk at the garden party.”

He could leave meetings early — or simply not attend many of them — if he feels there NATO will not dramatically increase its defense spending. “I could see him blasting allies publicly, walking out of his chair and putting [Secretary of State] Pompeo or [Secretary of Defense] Mattis in his place,” says Smith.

That may not seem like much, but it’s actually a huge deal. The leaders of nearly 30 countries will be traveling to Belgium to spend two full days speaking directly with Trump about issues critical to international security.

If Trump treats the meetings as pointless wastes of time and walks out or skips them altogether, that would be a major slap in the face to America’s closest allies — many of whom have sacrificed their own men and women to fight for America in places like Iraq and Afghanistan.

On top of that, Trump will be meeting with Russian President Vladimir Putin just a few days after the NATO summit. Think of the optics: Trump ignores or disrespects 28 of America’s closest allies, then days later flies to Helsinki to spend hours in one-on-one meetings with Putin, listening to every word the dictator has to say.

Beyond optics, there’s also a real fear that Trump might end up agreeing to things in that one-on-one meeting that would be good for Russia but bad for the US and NATO — things like ending joint NATO military exercises; lifting sanctions off Moscow first put in place to punish it for invading Ukraine in 2014; or even reducing US contributions to NATO in exchange for a better relationship with Russia.

That’s exactly the scenario everyone is afraid of.

It’d be hard to overstate just how stunning any of that would be if it happens over the next week, especially since NATO is mostly to designed to push back on Russia. “NATO is the best and strongest counter to Russia’s attempts to break NATO apart by interfering in the domestic political systems of its member countries or, as it did in Ukraine, physically invading them,” former US Ambassador to NATO Ivo Daalder told my colleague Sean Illing.

There are some lower-scale ways Trump could undermine NATO efforts: He could also look bad during a photo opportunity, whether it’s brusquely pushing a NATO leader aside like last year or sitting awkwardly next to a colleague, like below.

To be clear: It’s normal for allies to have their disagreements or tense moments. But this rupture — and the very real possibility that Trump may widen it even further in the next few days — stems from the fact that NATO allies feel they can’t trust America like they used to.

And that’s mostly down to Trump.

If the US Postal Service fails, rural America will suffer the most
Live results for Mississippi’s new state flag ballot initiative
Isabel Wilkerson wants to change how we understand race in America
Hong Kong protesters show no sign of backing down in the face of countless threats
#SecondCivilWar: how a wild conspiracy theory became a July 4th Twitter meme
The Pandemic Playbook