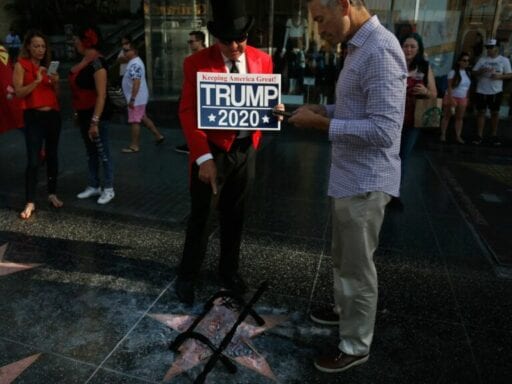 What if President Trump did popular stuff on policy?

In particular, what if Democrats do well in the midterms and take the House and start passing bills, and then Trump takes their most popular ideas and agrees with them? Or at least with watered-down versions of them?

So maybe Trump signs a bill to hike the minimum wage to $12 an hour, a deficit-financed surge in infrastructure spending, some version of a DREAM Act paired to wall funding, and maybe even something like the Manchin-Toomey background check bill.

Up until now, Trump has governed like a very hardline conservative except on trade. But except for authoritarian views on immigration and crime, Trump doesn’t have any personal history of consistency as a conservative. And even during his 2016 campaign, he put forth a much more eclectic, heterodox version of himself than how he’s governed.

Of course, maybe that won’t change no matter what happens in 2018. Maybe he’s a true prisoner of the conservative movement. Maybe he’s always harbored Heritage Foundation sympathies and they are just now blooming. But I think a reasonable person should have some humility about his ability to foresee the future and admit that this bipartisan, populist Trump is at least a possibility.

One immediate consequence of this would be that it would give guys like Ben Sasse and Mike Lee, who sometimes like to position themselves as more high-minded than Trump, the opportunity to actually vote against the president sometimes. Any Trump-Pelosi deal could easily weather a dozen or so defections from the right that would allow that crew to own the brand of “true conservatives” without needing to do anything to check Trump’s corruption or authoritarianism.

Conversely, it would greatly empower the left of the Democratic Party because it would cost more moderate factions their resistance branding.

Trump’s electoral base wouldn’t mind a handful of ideological betrayals since rank-and-file Republicans are really here for the culture war stuff and not for the concrete policy anyway. So Trump would enter the 2020 campaign with his base intact but also with the brand as a freethinking moderate who’s at odds with the right wing of congressional Republicans. Democrats would end up nominating someone with a relatively extreme rejectionist profile, and Trump would be in a good position to improve his approval ratings and get reelected.

Think of it as basically a rerun of Bill Clinton in 1995-’96 with “triangulation.”

Now, of course, there are other historical models. Richard Nixon signed a lot of moderately progressive legislation to try to salvage his presidency, and it didn’t work. And the fairly productive Bush-Pelosi 110th Congress didn’t restore the GOP’s popularity.

Anyway, who knows? But I think the odds of a Trump rebound are underrated.

One Good Thing: This true crime podcast about a murderous doctor is even scarier during a pandemic
The Good Place is finally back on track
Jeff Bezos and Elon Musk want a Mars colony to save humanity
Odd Job: This teen bought a bunch of vending machines. Now he makes six figures.
Senate judiciary panel grills Justice inspector general, FBI director on Clinton email probe
The protests over Nia Wilson’s murder, explained