How Trump is letting polluters off the hook, in one chart 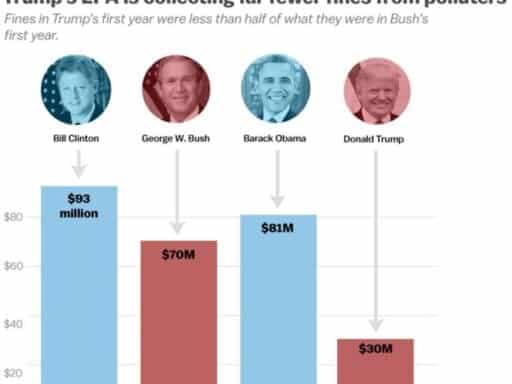 Civil penalties collected by the EPA fell by more than half in Trump’s first year in office.

In his first year as head of the Environmental Protection Agency, Scott Pruitt has made a huge mark, shrinking his agency and repealing as many Obama-era environmental regulations as possible. Even amid an steady flow of ethics violations, he’s managed to ingratiate himself to President Trump by delivering wins for the White House’s agenda.

And as I noted earlier this year, Pruitt has also overseen a drastic slowdown in the day-to-day work of the agency. Key offices remain vacant and the implementation of new environmental rules has stalled, effectively throttling the agency.

But one of EPA’s most important jobs is to enforce civil penalties for companies that breach limits for hazardous chemicals like sulfur dioxide and hydrochloric acid. And one measure of Pruitt’s foot-dragging that emerged earlier this year is how much money EPA has been collecting from polluters lately.

According to a February report from the Environmental Integrity Project, a watchdog group that advocates for enforcement of environmental laws, the amount of fines collected by Trump’s EPA has plummeted compared to the agency under the past three presidents in their first year in office. Check out this chart:

The fines come from consent decrees, a type of legal settlement where a party has to take a specific action but does not have to admit fault or liability. The consent decrees here involve violations of federal environmental laws like the Clean Air Act and the Clean Water Act. (This tally doesn’t include penalties from EPA’s Superfund program, criminal cases, or the administrative actions that EPA takes to resolve smaller violations.)

The number of civil cases filed by the EPA to collect these fines in the first place has also declined. In President Clinton’s first year, there were 73; under Bush, 112; under Obama, 71. In 2017, there were just 48 cases.

What this means is that the EPA is not going after polluters like it used to.

“Less enforcement doesn’t mean there aren’t a whole lot of violations that are out there,” said Eric Schaeffer, executive director of the Environmental Integrity Project, who led the civil enforcement office at the EPA under Presidents Clinton and Bush, in a call with reporters.

He noted that many of these civil cases take months to complete, so some of the cases completed under Trump started under Obama. In a consent decree reached with Exxon Mobil last October, the EPA boasted that the company would spend $300 million to install pollution controls, but Schaeffer noted that this total includes measures installed as far back as 2013.

“Many of those cases will drop out of sight if Congress agrees to cut the agency’s enforcement budget by 17 percent, as President Trump has proposed,” according to the report. “Enforcement matters, especially to the people who live and work next to plants that continue to release more pollution than the law allows.”

The EPA did not respond to a request for comment.