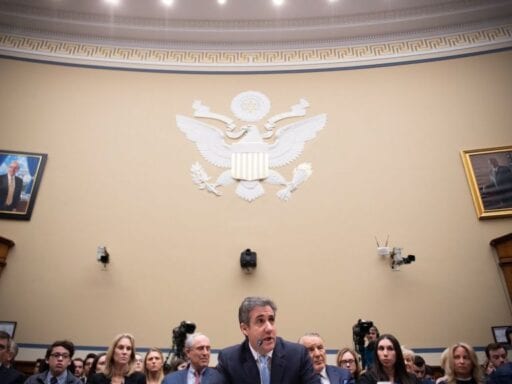 The use of a straw bidder to buy art isn’t unusual (but using charitable funds to do so … is).

Michael Cohen’s opening statement for his hearing before the House Oversight Committee Wednesday morning contained a litany of allegations against President Donald Trump. Among other things, Cohen claims, Trump violated campaign finance law, knew that members of his campaign were colluding with WikiLeaks, and — for some reason — once asked Cohen to hire a fake bidder to buy a portrait of himself that was being auctioned off in the Hamptons.

“Mr. Trump directed me to find a straw bidder to purchase a portrait of him that was being auctioned at an Art Hamptons event,” Cohen, Trump’s longtime lawyer and fixer, alleged. “The objective was to ensure that his portrait, which was going to be auctioned last, would go for the highest price of any portrait that afternoon. The portrait was purchased by the fake bidder for $60,000. Mr. Trump directed the Trump Foundation, which is supposed to be a charitable organization, to repay the fake bidder despite keeping the art for himself.”

To be clear, the fact that Trump allegedly enlisted a fake bidder to buy a portrait of himself isn’t the issue, although it does speak volumes about how he hopes to be seen; it’s that Trump paid that bidder off using money from the Trump Foundation, a since-dissolved 501(c)3 organization that ostensibly donated money to charitable causes and organizations, but then kept the painting for himself. In other words, Trump was using his charitable foundation to enrich himself. But this particular instance also reveals how opaque the art market — even minor art fairs in the Hamptons — can be.

Art auctions seem fairly straightforward: A lot is announced, people bid, and someone eventually wins. But in the art world, things aren’t always what they seem. Auctioneers are known to acknowledge nonexistent bids, known as “chandelier bids,” to encourage interest in a certain work by making it seem like bidders are interested even if they aren’t. (According to Artsy, auction houses prefer to call this practice “consecutive bidding.”) In 2007, a state senator in New York — where the two biggest, most prestigious auction houses, Christie’s and Sotheby’s, hold auctions — introduced a bill that would have outlawed chandelier bidding. The legislation never passed, and chandelier bidding remains legal to this day, though auction houses can only make up bids that are below a work’s reserve price, or the minimum price the work can sell for.

Even when bidders are real people, they aren’t necessarily bidding because they love or are interested in owning a piece of art. It’s not uncommon for art dealers and gallerists to bid up works by artists they represent at auction. Sometimes they do this to drive up the price of a certain work, which in turn increases the value of all other works by that artist; other times, gallerists bid on their own artists’ works to ensure that they don’t go unsold, which would lower the artist’s prestige and affect the perceived value of all their other works.

This is all possible because auction houses closely guard the identities of their bidders, which, of course, can occasionally enable shadiness, and which can certainly serve as conspiracy theory fodder. (In 2017, for example, an anonymous bidder paid more than $450 million for a long-lost Leonardo da Vinci painting sold during Christie’s semiannual, invitation-only evening auction. The New York Times later reported that the bidder was a little-known Saudi prince with no major art collection to speak of, which in turn inspired a complex conspiracy theory involving money laundering, a Russian oligarch, an Israeli intelligence firm, the royal families of both Saudi Arabia and Abu Dhabi, and Trump’s 2016 presidential campaign. That theory doesn’t appear to have any merit, but it’s a sign of how convoluted the art market can be — and how, in the absence of transparency, people can use the bits and pieces of information they have to craft a narrative that makes sense to them, even if it’s not true.)

In 2013, when Trump was bragging about how much his portrait went for at auction, a now-80-year-old, @DollyGHughes, tweeted what Cohen is testifying today: pic.twitter.com/DIYnFCm7aW

So what does this actually have to do with the fake bidder Cohen hired to bid on that portrait of Trump?

For starters, Cohen’s testimony paints a picture of Trump as an egotist who is obsessed with public perceptions and is willing to bend the law to get what he wants. “Donald Trump is a man who ran for office to make his brand great, not to make our country great,” Cohen said. “He had no desire or intention to lead this nation — only to market himself and to build his wealth and power. Mr. Trump would often say this campaign was going to be ‘the greatest infomercial in political history.’”

According to Cohen, Trump often “inflated [the value of] his total assets when it served his purposes, such as trying to be listed among the wealthiest people in Forbes,” in an attempt to build his brand of a flashy, successful real estate mogul. Reports that Trump was vastly exaggerating his net worth surfaced as early as 2005, a decade before Trump launched his presidential campaign.

More than seven hours into the hearing, Rep. Ayanna Pressley (D-MA) asked Cohen why Trump would want to bid up the price of a painting he was ultimately paying for. “It’s all about ego,” Cohen replied.

The idea that Trump allegedly hired a fake bidder to buy a portrait of himself — that, it’s worth noting, would have otherwise sold for less or possibly even gone unsold — is in line with his overall branding strategy. If Trump’s fortune wasn’t big enough to get him on the Forbes list, he’d find a way to pretend it was; if no one was willing to pay $60,000 for an idealized portrait of Trump, he’d find someone to pretend to do so and then pay them off with money from his charitable foundation. It’s also worth noting that Cohen’s allegation bolsters accounts from the Washington Post’s David Fahrenthold, who previously reported that Trump purchased two other portraits with money with his foundation.

I think my favorite detail in this circus is Trump forcing someone to bid on his hideous painting at some Art Hampton event https://t.co/4UExFWKLUN

Cohen’s claim that Trump hired a fake bidder to spend tens of thousands on a portrait of him is one of many outrageous details in his testimony, but — setting aside the allegations of how that painting was paid for — the presence of a fake bidder is par for the course in the art world.

North Korea kept long-range missiles out of its military parade. It could be a good sign for nuclear...
Trump and the Ukrainian president met today. Here’s what you missed.
The editor of Taco Bell Quarterly explains how to make art out of a fast food brand
The techlash hasn’t come up in the Democratic presidential debates. Warren could change that.
What to know before posting a photo of your kids on social media
Shazam!’s 2 end-credits scenes, explained