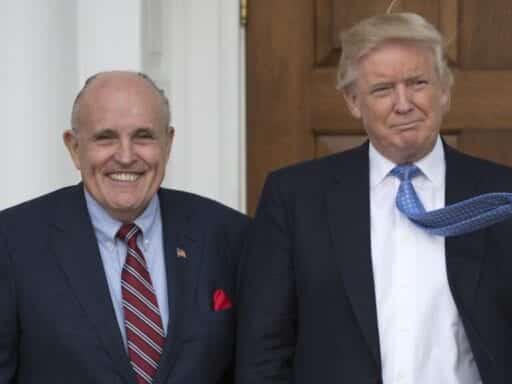 Trump is embroiled in a major scandal that stretches from Ukraine to Australia — all stemming from his belief in debunked right-wing conspiracy theories.

President Donald Trump is embroiled in a major scandal that stretches from Ukraine to Australia — all stemming from his belief in long-debunked right-wing conspiracy theories.

Last week, the White House revealed that the president pressured Ukrainian leader Volodymyr Zelensky to look into a computer server belonging to Democrats he says is in Ukraine and contains incriminating information about the origins of 2016 election meddling.

The problem is there is no physical server, there’s no actual reason to suspect Ukraine would have one in the first place, and there’s no evidence Ukraine had interfered in the 2016 vote at all.

Then, on Monday the New York Times detailed how Trump asked Australian Prime Minister Scott Morrison to investigate how special counsel Robert Mueller’s Russia probe got its start. Trump appears to think that that the Obama-era FBI somehow plotted to stop him from winning in 2016. But what actually happened is that a campaign staffer blabbed to Australia’s ambassador in London about his knowledge that Russia had political dirt on Hillary Clinton. It’s likely that Trump wants Morrison to rail against those established facts.

Which brings us to an unsettling conclusion: Trump’s discussions with foreign leaders — a major part of how the US uses its power and conducts foreign policy — are steeped in conspiracy theories. The impeachment mess he’s in is one consequence.

Trump was referring to a debunked conspiracy theory: Ukraine — not Russia — interfered in the 2016 election, and CrowdStrike covered it up. It’s a belief he continues to hold even though his top aides have repeatedly told him the theory had been debunked.

CrowdStrike was hired by the Democratic National Committee (DNC) in 2016 to look into who hacked into their networks during the election. The firm determined that it was two Russian groups with Kremlin ties.

That’s incorrect. The company’s cofounder, the Russian-born US citizen Dmitri Alperovitch, is a senior fellow at the Atlantic Council think tank in Washington, which receives funding from Ukrainian oligarch Victor Pinchuk. But that flimsy connection is a far cry from the firm he started being secretly run by an Eastern European billionaire. (Before coming to Vox I worked at the Atlantic Council and interacted with Alperovitch on a few cybersecurity-related events and projects.)

CrowdStrike denies any wrongdoing in a statement to reporters issued last week: “With regards to our investigation of the DNC hack in 2016, we provided all forensic evidence and analysis to the FBI. As we’ve stated before, we stand by our findings and conclusions that have been fully supported by the US intelligence community.”

Trump’s belief in a “deep state” conspiracy that led to the investigation into his campaign’s ties with Russia also seems to have led him to bring up the topic with Morrison, Australia’s leader.

The FBI launched a counterintelligence investigation into the Trump campaign’s contacts with Russian agents in July 2016, after Australia’s top diplomat in Britain, Alexander Downer, informed his American counterparts about a conversation he had two months earlier with George Papadopoulos, then a foreign policy adviser to the Trump campaign.

During a night of heavy drinking in London, Papadopoulos bragged to Downer about his knowledge that Russia had political dirt on Hillary Clinton in the form of “thousands of emails that would embarrass Mrs. Clinton, apparently stolen in an effort to try to damage her campaign,” as the New York Times put it in a December 2017 report.

Trump and his allies have tried to muddy the waters about the origins of the Russia investigation by insisting it actually started with the Steele dossier, an unverified opposition research document that includes outrageous claims about the Russian government taping Trump watching prostitutes urinate on a hotel bed in Moscow in 2013. Fox News has helped Trump normalize this lie, and Trump backers have continued to push it during national television interviews.

Even the so-called “Nunes memo,” prepared by then-House Intelligence Committee chair and staunch Trump ally Devin Nunes (R-CA) and released early last year, acknowledges that the FBI’s investigation of the Trump campaign was “triggered” by evidence presented to American officials about Papadopoulos having secretive contacts with Kremlin agents when it was released about a year ago.

Papadopoulos, though, believes Downer was spying on him — a belief echoed in many right-wing circles. What’s more, many on Fox News and elsewhere say that somehow the Obama administration sent Downer to keep tabs on the Trump campaign and help Clinton. Trump seems to believe this.

Canberra, for its part, seems open to working with Washington on Trump’s request.

“The Australian Government has always been ready to assist and cooperate with efforts that help shed further light on the matters under investigation,” the government said in a Monday statement. “The [prime minister] confirmed this readiness once again in conversation with the President.”

Facts, as they say, are stubborn things — but just as stubborn seems to be Trump’s belief in conspiracies.

A class on how to deal with trauma — taught by a cop who killed a black man
An expert on Trump’s threat to revoke clearances: it’ll “set back the entire security establishment”
How Black Lives Matter fits into the long history of American radicalism
Irony is dead: The Trump sons are doing everything possible to make corruption a major 2020 issue
6 major questions the Supreme Court still needs to resolve this term
Vox Sentences: This is a test