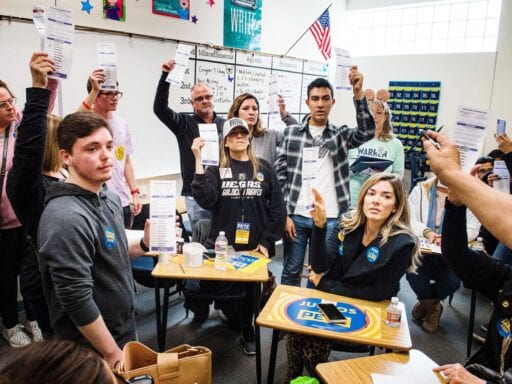 A volunteer counts votes during the Nevada caucuses in Las Vegas, Nevada, on February 22, 2020. | Mark Ralston/AFP via Getty Images

Here’s where our results come from and why we trust them.

This year, Vox is publishing live election results for every presidential primary and in many down-ballot races. We rely on data powered by Decision Desk HQ — a firm that provides trustworthy, timely information.

We’ve worked with Decision Desk since 2017. So far, it’s had a strong track record. It’s only had to go back on one election call since it started offering its services to clients like Vox, which was in California’s 21st Congressional District, where Republican David Valadao lost to Democrat TJ Cox. It was an extraordinarily close race, and though at first it looked like Valadao had a lead that wouldn’t be affected by mail-in ballots, it ultimately flipped on the last mail-in ballots. On this, Decision Desk wasn’t alone. The Associated Press had to recall that election too.

In 2020, Decision Desk has made no incorrect calls. It’s also been quite fast, relative to competitors. It beat its main competitor, the AP, by 47 minutes in New Hampshire and by 15 minutes in Nevada, and it called the race almost immediately in South Carolina.

We trust Decision Desk because it uses gold-standard methods to call elections. Here’s how it works.

Decision Desk gets data from the source

For example, state officials responsible for reporting elections generally report them on a public website. But if you’ve ever tried to access one of these sites, you’ve probably noticed they are mostly terrible. They often do not post the most useful information front and center — like where to vote and election results. They also aren’t necessarily easy to find through a Google search.

This is where firms like Decision Desk come in. Media outlets pay them to do the extra work necessary to pull results together. Decision Desk uses an API, or application programming interface, that essentially allows the firm to get the information at the same time as it’s published on the website, provided by election officials. It also scrapes information directly from other public sites. And it uses old-fashioned methods, like phone calls and faxes — though to a far lesser extent than the AP does. In Iowa, Decision Desk had a person on the ground to get the results directly from the party.

How Decision Desk calls a race

For people new to election watching, it might seem ridiculous to have an election called with less than 1 percent of the vote counted. But firms can. Decision Desk employs electorate experts by state and knows which counties to watch. The patterns give it a lot of information about what the rest of the vote will look like.

When evaluating whether to call a race on election night, several factors come into play:

Decision Desk also uses a lot of other information like overall voter turnout and quality polling (sometimes its own) that were run very close to Election Day. In other words, it doesn’t just rely on counting votes — though it’s pretty good at that.

The Democratic Party is moving toward counting votes

If one thing came out of the disaster of the Iowa caucuses, it’s that counting votes is best left to election officials. As a whole, the Democratic Party is moving away from caucuses. Though several states had them still in 2016, almost all of those states have switched over to running primaries instead, including my home state of Minnesota.

There’s a brewing sentiment among the party that the candidate with the most votes should win. This is, of course, the core of Bernie Sanders’s argument — or at least it was while he was still winning the most votes. But especially in the wake of the realization that caucuses perhaps aren’t the best way to get an increasingly motivated primary electorate involved, primaries are the natural alternative choice.

Decision Desk has consistently reported individual vote counts reliably and quickly. So on Super Tuesday and throughout the presidential election, we’re going to be carrying Decision Desk’s live results.