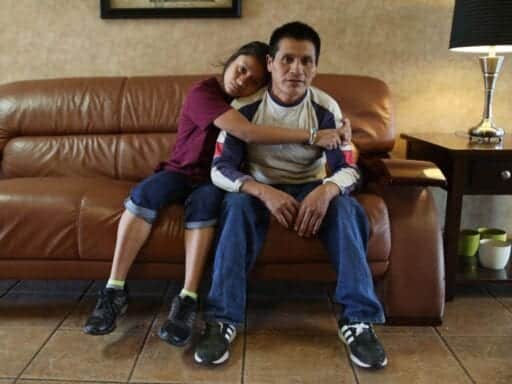 Many parents reunited with kids face a grave choice — and might have only 48 hours to make it.

The federal government is on pace to meet a court deadline to reunite all “eligible” families it separated at the US-Mexico border earlier this year.

The question is what happens after that.

But the more urgent question after Thursday might be what’s going to happen to families who have been reunited.

More than half of the parents who have been reunited with children (or will be reunited this week) have already received deportation orders. They’re supposed to have a choice between having their children deported with them, or leaving their children in the US — to truly be the “unaccompanied alien children” the government treated them as to begin with.

The ACLU, who’s been litigating this case since February — months before widespread family separation made news — on behalf of parents separated from their children, is worried. Their fear: that the Trump administration will launch mass deportations of hundreds of families who might not have understood the choice in front of them — or might have even waived rights to stay in the US and fight their case.

The Trump administration accuses the ACLU of moving the goalposts, and turning a family-reunification case into an anti-deportation one.

Thursday’s deadline is less the end of the family separation saga than the start of a race against the clock — with the two sides fighting over how much time a family can have together before some or all of them are deported.

The government really has stepped up its pace on reuniting families

According to Department of Justice attorneys in a Monday evening court hearing before Judge Sabraw, the government has identified 2,551 kids from 5 to 17 years old who are “potentially” subject to Sabraw’s order to reunite all eligible families by July 26.

1,637 of those — nearly two-thirds — have been deemed “eligible” for immediate reunification. The government believes that all of them will be reunited by the end of the day Thursday (the ACLU didn’t challenge this claim). The authorities are already over halfway there: 1,012 children had been reunited with their families as of Monday night, about 40 percent of all children in the total pool of 2,551.

That still leaves as many as 900 families who the government has deemed “ineligible” for reunification. In a few cases, the parent has a criminal record that the government thinks is disqualifying; in some others, the Office of Refugee Resettlement has already released the child to a different sponsor (sponsors are usually relatives living in the US).

In 463 cases, however, the family is “ineligible” for reunification because the parent has already left the US, after either being deported or accepting “voluntary” removal. The federal government is still trying to track those parents down — the ACLU has offered help via international NGOs — but it’s still obligated to find them, even after the deadline passes.

But after the government struggled to reunite 100 families with children under the age of 5 earlier this month, it’s remarkable that they’ll be able to meet Sabraw’s July 26 deadline even for a limited number of families.

The judge is impressed with its progress — he said the responsible officials “should be commended” Monday — and has made it clear that in his eyes, reuniting the 1,600 or so “eligible” families counts as meeting the deadline, even though hundreds more “ineligible” ones remain.

Reunification isn’t an end to the process. More than 700 of the families who are (or will imminently be) reunited are still going through the process to determine whether they’ll be allowed to stay in the US (e.g. by receiving asylum). But the majority of parents about to be reunited — 900, according to the government’s Monday filing — have already received an order of deportation. For them, reunification is bittersweet — because it starts the clock on their imminent departure from the US.

“A mess on the ground”: the ACLU is concerned that parents have agreed to deportation without understanding their options

Once the Trump administration separated a family, it put parents and children on two different legal tracks. The children, reclassified as “unaccompanied alien children,” had a couple more options for legal status — and a better chance that, even if they were ultimately ordered deported, it would take years for their cases to be resolved.

The parents, on the other hand, were subject to expedited deportation unless they could pass a screening interview for asylum — something that many lawyers report has been hard for separated parents to do (between recent changes to asylum policy and being traumatized by family separation).

Sabraw banned the government from deporting parents before they’d had a chance to reunite. But on Thursday, hundreds of newly reunited parents will be eligible for immediate deportation. (It’s not clear how many of the 900 parents with deportation orders are immediately deportable; the DOJ said Monday that not all 900 orders are “executable,” implying that some of those parents had not yet exhausted their legal options.)

Those families can’t stay together in the US. The only options are staying together in their home country — by taking their children with them when deported — or keeping the children in the United States to fight their own court cases to stay in the US, while the parents returned to the home country alone.

The federal government says it’s already explained to parents what their options are, and had them preselect before their cases were resolved what they’d do if they were ordered to be deported. On Monday, the ACLU vehemently disagreed.

“Things are a mess on the ground,” ACLU lawyer Lee Gelernt said.

According to Gelernt, parents are being herded into a room 50 at a time and told “you have three minutes” to understand their rights and make the decision about whether to keep their families together. Despite Sabraw’s order to connect families by phone before reuniting them in person, many families have reportedly only had one brief phone call — hardly an opportunity to make an informed decision about the family’s future.

That raises the prospect that not only have parents unwittingly signed away their children’s rights to continue with their cases, but, perhaps, their own — agreeing to deportation because they thought it was the only way to get their family together again.

The ACLU and government had been negotiating over the idea of a mandatory waiting period between reunification and parental (or family) deportation, but negotiations fell apart over the weekend.

Gelernt says that if lawyers on the ground are going to ensure due process for all of these families, they need “at least 7 days” between reunification and parental (or family) deportation. The government doesn’t believe it should have to provide more than the 48 hours it’s already agreed to.

A DOJ attorney pointed out to Sabraw Monday that the process being used now for notifying parents of their choices is one that Sabraw himself already signed off on. The DOJ also (unsurprisingly) denies that things are “a mess” in detention centers.

But perhaps most importantly, the government is accusing the ACLU of trying to change what the lawsuit is fundamentally about.

Sabraw’s focus has been on identifying families who were separated and getting them back together as soon as possible. That’s separate from the question about what happens to families afterward.

Keeping families together doesn’t necessarily mean keeping them together in the US. There’s no right for a family to stay in the US just by virtue of being a family — even a family who was separated upon arrival. So far, it’s been implicitly accepted that family reunification will often mean family deportation.

Sabraw has been extremely skeptical when parents have chosen the alternative: those who have waived their right to keep their child with them, and instead chosen for the child to stay in the US “unaccompanied” — even though, in many cases, those children are ultimately placed with other relatives in the US.

But that is the other option.

Even a parent who keeps fighting until all her options are exhausted may buy herself only a few days; relatively few families, ultimately, will probably win legal status in the US. The odds of children on their own aren’t great, either, but they’re better.

Gelernt and the ACLU believe that many parents, especially of older teenagers, might well make this choice if they knew what their options were. To them, family reunification means a family conferring, together, on whether to allow themselves to be separated again — perhaps forever — if the alternative is for all of them to be shipped back out of the US, subject to a separation ordeal with nothing to show for it but an order of deportation.

Amazon lost a $10 billion Pentagon contract to Microsoft. Now it’s blaming President Trump directly.
Support for Brett Kavanaugh is dwindling among voters amid sexual assault allegations
Sen. Claire McCaskill suffers cracked rib from Heimlich maneuver
Tropical storm Laura’s flooding and other impacts on the ground: What we know
These 3 Senate Republicans could help decide the fight over the rules of the impeachment trial
The US-China trade war, explained in under 500 words