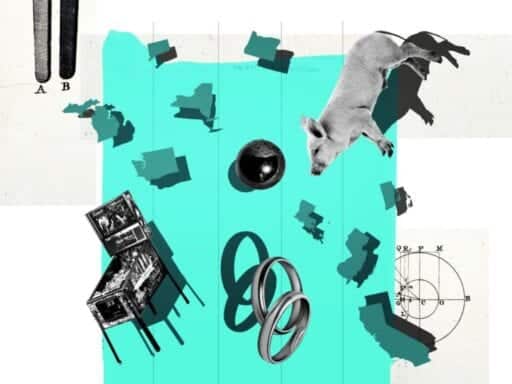 Historical statues about runaway pigs, pinball machines and obscene bumper stickers are still occasionally enforced. Here’s why they stay on the books.

The policy: Create commissions that sleuth out obsolete laws that could cause harm

Laura Tharney can trace her fascination with weird, obsolete laws to trespassing pigs. In 2002, when she joined the New Jersey Law Revision Commission — an obscure government body with a mission to keep the state’s laws up to date — her colleagues inundated her with stories of their greatest hits. Chief among them was the successful removal of a particularly strange statute, left on the state’s books into the 1990s: a 19th-century rule that allowed homeowners who found a neighbor’s swine on their property to legally kill the animal, so long as the carcass was sent to a county overseer.

“It just stuck in everyone’s head because it was so weird,” Tharney, who is now executive director of the commission, said. “I was like, swine? What?”

State law teems with historical statutes that, in 2019, seem downright bizarre. Illinois used to criminalize the act of “riding or driving faster than a walk’s-pace through a herd of livestock,” and West Virginia still collects taxes of a dollar or two on dogs. South Carolina maintains a ban on “obscene” bumper stickers that led to a $445 fine against a woman who appended fake testicles to her truck. Tharney herself has engineered the removal of countless statutes, including a requirement — expunged in 2017 — that horses on the highway must wear sleigh bells.

Yet these laws are not always harmless. Take a superficially silly law: Since 1869, New Jersey has required that bicycles be equipped with bells “capable of giving a signal audible for a distance of at least one hundred feet,” a law that dates back to 19th-century “animosity” between bicyclists and pedestrians. Despite a recommendation that the law be struck, New Jersey’s legislature has yet to enact the change.

Meanwhile, New Jersey police have allegedly sometimes used the bell law — which many residents don’t realize exists — as an excuse to stop black bicyclists. In one case in 2018, police pulled over a black man who they claimed was acting “suspiciously,” and cited the obsolete law.

Since before the signing of the Declaration of Independence, US states have depended on legal experts to edit and organize their laws. But only in 1921, as state law grew more and more unwieldy, did experts agitate for an oversight body that could recommend larger changes. A decade later, New York became the first US state to form a commission dedicated to axing obsolete laws.

Although every state has at least one designated official who edits laws, only nine states maintain a full law revision commission: California, Connecticut, Louisiana, Michigan, New Jersey, New York, Oregon, Rhode Island, and Washington. Of those, only about half are empowered to recommend the removal of laws, making jobs like Tharney’s increasingly endangered. Even the existing commissions have often seen their budgets cut and their scopes narrowed.

“There are fewer and fewer law revision commissions in the US,” Tharney said. “There are even fewer that can engage in substantive proposals of their own.”

Sleuthing out strange laws is only a part of Tharney’s job, but it is important. Sometimes law revision commissions are the last defense between citizens and criminalization.

Tharney and her commission published a comprehensive account of New Jersey’s legal anachronisms in 2012. The list included a ban on public acrobatic stunts, a loophole that let state police hire private investigators to go after “thieves, tramps, marauders,” and a pre-Google-Maps requirement that courthouse pillars face the meridian so that people can reorient their compasses.

Tharney works alongside a scrappy skeleton crew of attorneys, all of whom cram into a conference-room-sized office space located in a courthouse building. They tend to hear about anachronistic laws either through searching the books or from tips from lawyers. “Sometimes a member of the legislature will come across a provision of the law and say, ‘Oh my God, I can’t believe this is still on the books. This doesn’t make sense any longer,’” Tharney said.

Rules that seem out of step with the 21st century pervade the nation. Until this past June, Virginia enforced a Prohibition-era ban on “habitual drunkards” from possessing alcohol. From 2007 to 2015, the state designated 1,220 people as “habitual drunkards,” and that group of 1,220 faced nearly 5,000 alcohol possession charges. One plaintiff was arrested 30 times for drinking or intending to drink.

Tharney and her team have had their successes. In 2014, Tharney helped to scrub a requirement that New Jersey county jails not spend more than 50 cents per day on food for the people they incarcerate.

New Jersey was also one of many states that allow material witnesses in criminal cases to be kept in jail indefinitely — even if those witnesses have not been charged with a crime. While these detentions usually last a few days, there’s little oversight. Recognizing the potential for abuse, the New Jersey Law Revision Commission recommended an update to the antiquated law. In 1994, the legislature adopted the reforms.

But other states that lack commissions like Tharney’s are putting people at risk. In 2015, Oregon, which still has a similar witness law on the books, detained an immigrant man who was a material witness in a murder trial but who was not implicated in any crime for more than 900 days.

Even the strangest laws can be deployed with surprising regularity. Maine, along with several other states, prohibits the sale of cars on Sundays — largely because industry groups favor a day off without competition. In 2010, the city of Beacon, New York, forced an arcade museum to close because of the city’s ban on pinball machines. The mayor told the New York Times that the town felt compelled to shut down the museum because “laws could not be selectively enforced.”

As with much of our criminal justice system, these obsolete laws are often used to justify intrusions on black and brown Americans. In voting booths, Alabama has a “five minute time limit if voter is holding up other voters,” a law that was historically wielded by other Southern states as a way to prevent black Americans from voting. In a 1988 court case, plaintiffs alleged that, in Alabama, “black voters were harassed with the five-minute rule” and prevented from casting a ballot.

But deciding to remove any law is complicated, according to Tharney. Laws that appear irrelevant might be underpinning other, more important statutes.

“You think of house of cards,” Tharney said. “You don’t want to pull the bottom card out of the stack and have everything else collapse.”

Even when the commission does conclude that a law is unnecessary, the state legislature must also vote for its removal, which is no guarantee. Often, legislatures are considering many policies at once, and anachronistic laws are low priority. Tharney estimates that about a third of her proposals ever pass.

Still, other states are recognizing the value in a legal body that sleuths out legal loopholes. Legislators in Massachusetts, for instance, have pushed for the creation of a state law revision commission since early 2015. But even the states that do boast law revision commissions rarely want to pay for them. “It’s a struggle to be funded,” said Peter Kiernan, who chairs the New York State Law Revision Commission in addition to working as a private practice attorney. Like so many institutions, these commissions are subject to political headwinds. “The current governor is hostile to the commission and has refused to provide funding for the commission,” Kiernan said.

Yet these antiquated laws continue to slip through the cracks of our legal system. North Carolina’s domestic violence law, for example, fails to grant legal protections to same-sex couples that don’t share a home, thanks to one antiquated phrase in the statute. As the Marshall Project reported, the law led a judge to disqualify one woman from any possibility of receiving a domestic violence order against her girlfriend.

North Carolina does not have a law revision commission. But if it did, that commission may have been proactive about updating the law so that it wouldn’t have excluded queer people. Some states are already trying: Following the legalization of same-sex marriage in 2015, the Michigan Law Revision Commission rewrote hundreds of sections of Michigan law that used the language of “husband and wife.”

“These law review commissions could do this,” said Todd Brower, a professor of constitutional law who focuses on protections for LGBT people. “This could be part of what they do. I just think that they don’t tend to.”

“I think these commissions have an incredible amount of potential, and they do a lot of good work,” he added.

Michael Waters is a writer covering the oddities of politics and economics. His work has appeared in the Atlantic, Gizmodo, BuzzFeed, and the Outline.

The CDC confirms a third US coronavirus case. Experts say it’s no cause for alarm.
Poll: 53 percent of lower-income US households won’t be able to pay all of April’s bills
She wanted addiction treatment. She ended up in the relapse capital of America.
The officer who used a chokehold on Eric Garner was fired. But the case is far from settled.
Former officer Jason Van Dyke sentenced to 6 years for Laquan McDonald shooting
11 questions about the coronavirus economic crisis, answered