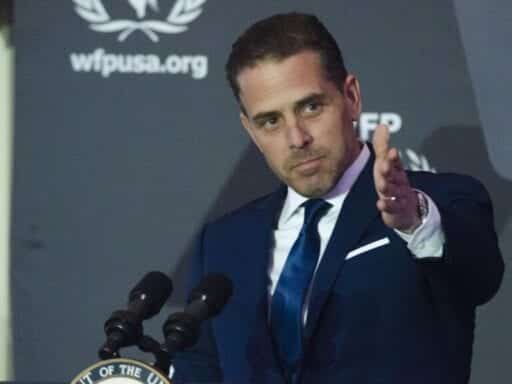 In an interview with ABC News, Biden defended his résumé, but said he regrets that his business dealings have led to an impeachment inquiry.

Hunter Biden — son of former Vice President Joe Biden and the man who set off President Donald Trump’s desire for a Ukrainian investigation into the Biden family — expressed regret that his business dealings have touched off a scandal on Tuesday, but maintained that while he may have made poor choices in the past, he did nothing wrong in accepting work from a Ukrainian energy company.

Biden made those comments in an interview with ABC News, breaking his silence on an issue that has led to an impeachment inquiry into the president. That interview followed a statement Biden’s lawyer released Sunday outlining the businessman’s plans to avoid questions of conflict of interest should his father, a Democratic candidate for president, win the White House in 2020.

Hunter Biden joined the board of a Ukrainian natural gas company named Burisma Holdings in 2014; that company’s owner was the subject of a corruption investigation that had stalled. Despite evidence suggesting the opposite is true, Trump and his allies have alleged Joe Biden — who at the time was vice president — tried to use to the power of the vice presidency to shield his son from that investigation. They’ve also pressured Ukrainian officials to launch a new investigation into Burisma and the Bidens.

“In retrospect, look, I think that it was poor judgment on my part,” Hunter Biden told ABC’s Amy Robach about his decision to accept the Burisma job. But said he “did nothing wrong at all,” except for one thing: “I gave a hook to some very unethical people to act in illegal ways to try to do some harm to my father. That’s where I made the mistake.”

Watch more from the exclusive interview on @GMA. https://t.co/WgjZRVR9Kp pic.twitter.com/EsKfKzxZ0M

Noting he had worked on a number of boards in the past, Biden went on to say what made Burisma different is he failed to take “into account that there would be a Rudy Giuliani and a president of the United States that would be listening to this — this ridiculous conspiracy idea.”

Trump and his allies have, however, seized on the conspiracy theory, and have taken a number of actions because of it. Rudy Giuliani, Trump’s lawyer and a private citizen, has taken trips to Ukrainian to pressure officials to start investigating Biden, and he seems to have worked with State Department officials to push the investigation as well.

Trump asked Ukrainian President Volodymyr Zelensky to investigate the Bidens in a call that caused concern in the White House that he was using the power of his office to pressure a foreign country to discredit a potential rival. That concern led to a whistleblower submitting a complaint about the president’s conduct, and, now, to an impeachment inquiry.

Hunter Biden addressed this state of affairs in his interview, saying he takes “no pleasure” in watching the “death spiral of this administration.”

“It’s really hard for me to say anything snarky right now or combative because I was raised to respect that office,” Biden said. “It’s making me emotional. … I hope that the history isn’t fully written yet. I hope that a lot of people that — that have a chance at redemption here stand up for what is right.”

The White House has argued that it is the entity standing up for what is right in pressuring Ukraine to investigate the Bidens. And it has said that it will not cooperate with House Democrats’ efforts to investigate the Ukraine scandal. Some current and former administration officials have disregarded the White House’s stance on the matter and submitted to questioning by Congress, however.

Hunter Biden himself does not have any direct knowledge of the wrongdoing the president is accused of; he is an important figure mostly because the obsession Trump and his allies have with proving he and his father did something wrong has put the president in potential peril.

This interview is unlikely to change anything with respect to the impeachment inquiry itself — and Biden signaled he would like to be as uninvolved in those proceedings as possible. Instead, Biden’s interview is most likely to affect how Trump approaches his self-defense, and it could increase Trump’s efforts to use Hunter Biden as a foil and as a symbol of Washington corruption.

The impeachment inquiry Trump faces begins with his demands of Ukraine. Although he also asked that country to look into a conspiracy theory about it being a repository for DNC emails, Trump’s initial — and subsequent — requests for a Ukrainian investigation have centered on Hunter and Joe Biden.

In recent days, Hunter Biden has worked to defend himself against the attacks of the president and his allies, arguing through his lawyer’s statement and in his interview that he was qualified to be on the Burisma board (pushing back against the claim that he was asked to join because of his family name) and announcing his plans to step down from the board of a Chinese company he has a small stake in (the president has claimed that Biden’s work in that country was facilitated by his father).

As Biden has made these efforts, Trump has worked to use the man as a symbol of the swamp he swore he would drain, tweeting that the media will protect Biden and attempt to minimize what the president sees as wrongdoing.

Wow! Hunter Biden is being forced to leave a Chinese Company. Now watch the Fake News wrap their greasy and very protective arms around him. Only softball questions of him please!

A big scandal at @ABC News. They got caught using really gruesome FAKE footage of the Turks bombing in Syria. A real disgrace. Tomorrow they will ask softball questions to Sleepy Joe Biden’s son, Hunter, like why did Ukraine & China pay you millions when you knew nothing? Payoff?

Trump and many of Hunter Biden’s critics have argued that his last name opened doors for him, and Biden admitted to as much when asked during the ABC interview, “If your last name wasn’t Biden, do you think you would’ve been asked to be on the board of Burisma?

“Probably not, in retrospect,” Biden said. “But that’s — you know — I don’t think that there’s a lot of things that would have happened in my life if my last name wasn’t Biden.”

Despite what Trump has suggested, using one’s political family ties to get ahead in business is not illegal. It is, unfortunately, routine business in Washington to hire the family members of powerful officials in hopes of gaining influence over public policy. For example, President Jimmy Carter’s brother, Billy; President George W. Bush’s brother, Neil; and Secretary of State Hillary Clinton’s brothers, Tony and Hugh Rodham, were all involved in business interests that once drew concern.

And as Vox’s Aaron Rupar has pointed out, Trump’s children — and the president himself — have all financially benefitted from his office.

Biden was asked directly about the business advantages those with political ties have, particularly with respect to a trip he took with his father to China during the Obama administration; he told the New Yorker he introduced his dad to a business associate during that visit.

“I don’t know what to tell you,” Biden said. “I made a mistake in retrospect as it related to creating any perception that that was wrong.”

That perception has obviously had wide-ranging effects. And as the president continues to face the question of impeachment, he will likely continue to do his best to aggrandize Biden’s behavior and use it as a weapon to attack those who believe it is his behavior, not that of Joe Biden’s son, that merits scrutiny.

Beyoncé’s attention-grabbing Vogue cover, explained
California’s heat wave caused rolling blackouts for millions
Netflix’s new Regency drama Bridgerton is as shallow as the aristocrats it skewers
The 5 best TV shows of August 2019
Every candidate gave a victory speech on caucus night
We train police to be warriors — and then send them out to be social workers