Hurricane Dorian gains strength again as it heads toward Canada 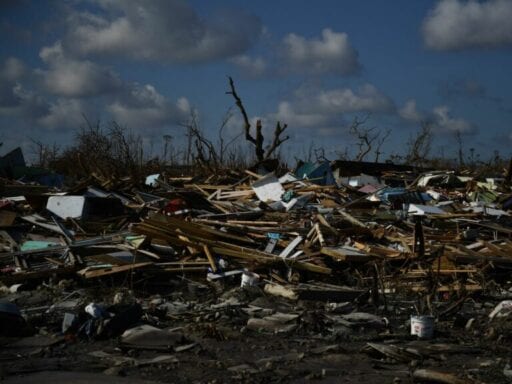 Share
Loading...
The ruins of what was once a neighborhood on Great Abaco Island following Hurricane Dorian. | Brendan Smialowski/AFP/Getty Images

Hurricane Dorian strengthened to a Category 2 hurricane Saturday afternoon, as it began moving past the coast of Maine towards the east coast of Canada with maximum sustained wind speeds of 100 mph.

The catastrophic storm has left more than 43 people dead in the Bahamas and at least five people dead in the US. As many as 70,000 people have been left homeless due to the storm in the Bahamas, and roughly 800 people are stranded on an island off the coast of North Carolina, cut off by flooding. Thousands more across the US’ eastern seaboard are without power, and at least 200,000 residents of the Canadian Maritimes have lost power as well.

While Dorian is expected to weaken to a post-tropical cyclone in the next 24 hours, scientists believe it will maintain hurricane-force strength until Sunday. The National Hurricane Center (NHC) has warned residents of Nova Scotia and western Newfoundland to prepare for impact as the storm sweeps north over the next several hours, with hurricane-force winds near 100 miles per hour extending outward up to 115 miles.

Areas of Maine through northeastern Canada are under a tropical storm warning, meaning they should expect storm conditions, including heavy wind and rain, within 12 hours. Prince Edward Island and the Magdalen Islands are under hurricane watch, meaning hurricane conditions are possible there as well.

Experts have also continued to warn those in the hurricane’s path to be on guard for storm surge and flooding: The projected rainfall — 1-3 inches in Maine, 3-5 inches in Nova Scotia, 2-4 inches in New Brunswick and Prince Edward Island, and 1-2 inches in Newfoundland — may cause flash flooding, the NHC warns. Large surf swells and winds capable of minor property damage are expected.

Dorian has left a path of devastation in its wake

Hurricane Dorian has weakened significantly since early last week, when it slammed into the Bahamas as a Category 5 hurricane, killing more than 43 people and leaving around 70,000 people homeless in what local officials have called “a historic tragedy.” It was the most powerful hurricane on record to hit the island nation.

Bahamian leaders have said hundreds, if not thousands of people, are missing following the devastating storm, and officials believe the already high death toll is likely to rise.

The hurricane hit the Bahamas with winds in excess of 200 mph and barely moved, sitting over the island for nearly two days while advancing towards the United States at just one mile per hour. (It is now moving just under 30 mph.)

Organizations such as the United Nations and the American Red Cross are sending supplies and health care providers to the hardest-hit areas, where hunger, lack of shelter, and waterborne illnesses risk hurting more people.

“There are too many dead bodies there. The government needs to remove everyone from the island, the smell is everywhere, it’s in the water,” one man who fled the island of Abaco told Reuters.

After more than 40 hours over the Bahamas, the hurricane turned north and moved along the Florida, South and North Carolina coasts.

After inundating the coast with heavy rains, the storm hit North Carolina’s Outer Banks on Friday, knocking out power to more than 135,000 people and closing more than 80 roads. As of Saturday morning, 57,000 people in North Carolina were still without power, the state’s governor told NBC. A South Carolina utility company said nearly 50,000 people lost electricity in their state.

We’re getting some pictures and videos of the severe flooding due to storm surge on the Outer Banks. This is Ocracoke, NC. Our hearts go out to ALL impacted by #Dorian. #nws pic.twitter.com/OAVxjJkUjj

Around 800 people on North Carolina’s Ocracoke Island were stranded by the storm; residents said their streets were filled with four to six feet of water within minutes.

“The wall of water just came rushing through the island from the sound side. And it just started looking like a bathtub, very quickly,” one man told the Associated Press. Helicopters have been airlifting food and water to those left on the island.

As the recovery effort begins in the Bahamas and in the US, Canadian officials have asked residents to stay indoors to wait out the storm.

“Safety is the primary concern here, stay off the roads, listen to the public officials and their instructions,” said Dustine Rodier, an operational support and communications official for the Royal Canadian Mounted Police.

For the latest on the storm, visit the National Hurricane Center public advisory page for Hurricane Dorian.

Bernie Sanders wants to take fossil fuel companies to criminal court
The Masked Singer is a televised abomination I’m going to devour every second of
Elizabeth Warren’s new plan to reform bankruptcy law, explained
New polls show Americans blame Trump and the GOP for the shutdown
Where the US already has a border wall with Mexico
The Supreme Court is about to hit an undemocratic milestone