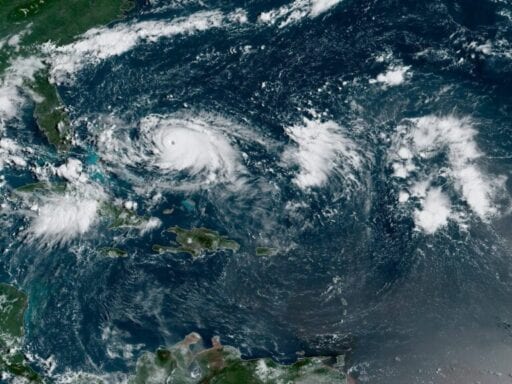 The latest forecast has Dorian turning north before hitting Florida. But uncertainties remain.

Dorian is estimated to be the second-most powerful hurricane ever recorded in the Atlantic Ocean, and ties the record for the most powerful storm to make landfall, according to the National Weather Service. Preliminary reports from the Abacos Islands show extreme devastation. As of Monday, the storm is (very slowly) moving through Grand Bahama Island, where winds are gusting over 200 mph, and 18-to-23 feet of coastal flooding. Plus, the forward motion of the storm has nearly stalled. It’s moving west at just 1 mph. The slower a storm moves, the more time it has to destroy communities in its path.

“A prolonged period of catastrophic winds and storm surge will continue to affect Grand Bahama Island through today and tonight,” the National Hurricane Center (NHC) warned. “Everyone there should take immediate shelter and not venture into the eye.”

As of Monday morning, the storm is sustaining 160 mph winds, which make it an extremely dangerous Category 5 “major” hurricane. (Major hurricanes are Category 3 and higher.) Winds of that intensity have the power to strip houses of their roofs, uproot trees, and destroy structures entirely.

After it passes through the Bahamas, the storm’s track grows more uncertain. The storm is not currently expected to make landfall in Florida, but instead, to stay uncomfortably close offshore. However, the NHC warns that even small changes to the forecast can bring intensely dangerous conditions to the coast. Right now, much of Florida’s Atlantic coast is under a hurricane warning or a watch, meaning hurricane conditions are imminent or expected. The hurricane is expected to be just offshore of Florida’s coast by early Tuesday.

Again, it’s still possible Dorian could make landfall. So pay attention to reports. To prepare, some counties along the Florida coast have issued, or may issue, evacuation orders for certain residents. You can see all of those orders here. Georgia Gov. Brian Kemp has ordered evacuations for six coastal counties. And evacuations have also been ordered in South Carolina as well.

Lantana to the Mouth of the St. Mary’s River…4 to 7 ft

North of Deerfield Beach to Lantana…2 to 4 ft

1. A prolonged period of catastrophic winds and storm surge will continue to affect Grand Bahama Island through today and tonight. Everyone there should remain in shelter and not venture into the eye.

2. Life-threatening storm surges and dangerous hurricane-force winds are expected along portions of the Florida east coast through mid-week, and storm surge and hurricane warnings are in effect. Only a slight deviation to the left of the official forecast would bring the core of Dorian near or over the Florida east coast. Residents should listen to advice given by local emergency officials.

3. There is an increasing likelihood of strong winds and dangerous storm surge along the coasts of Georgia, South Carolina, and North Carolina later this week. Residents in these areas should continue to monitor the progress of Dorian and listen to advice given by local emergency officials.

4. Heavy rains, capable of producing life-threatening flash floods, are expected over northern portions of the Bahamas and coastal sections of the Southeast and lower Mid-Atlantic regions of the United States into Friday.

What one pastor’s anti-Nike protest says about religion and nationalism in America
What Trump’s taxes tell us about his foreign entanglements
What it means to call Adam Driver a leading man
Facebook is testing an Instagram spinoff app for close friends only
New anti-government protests in Beirut leave more than 300 injured
The Jerry Falwell Jr. scandal, explained