Hurricane Dorian is gaining strength, and heading toward Florida 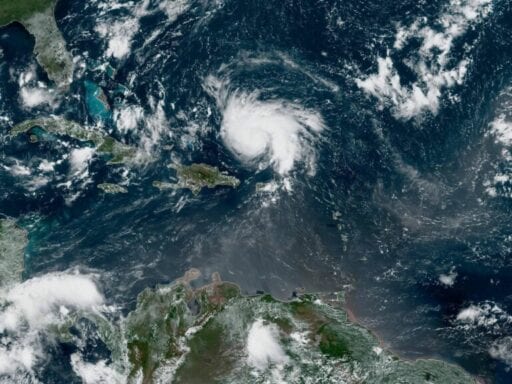 The storm may hit Florida as a major hurricane early next week.

After skirting by Puerto Rico on Wednesday, Hurricane Dorian is gaining intensity, and has its sights set on Florida. The storm currently is sustaining 85 mph winds, but the National Hurricane Center forecasts it will become a major hurricane (a.k.a. a Category 3 or higher, with winds in excess of 111 miles per hour), by Friday.

Tropical storm-force winds might reach Florida by Saturday. It may even grow to a Category 4 storm (with winds in excess of 131 mph) before making landfall early next week.

Much of the impacts on Florida, though, are still uncertain. “The risk of devastating hurricane-force winds along the Florida east coast and peninsula late this weekend and early next week continues to increase, although it is too soon to determine where the strongest winds will occur,” the NHC reports.

But the risks of a major hurricane extend well beyond the wind. The storm could bring up to a foot of rain for parts of Florida, and the Southeast. Plus, the deadliest aspect of a hurricane tends to be storm surge (flooding caused by seawater pushed onshore by the hurricane’s winds.) The NHC doesn’t yet have a forecast for storm surge, but it’s always a risk with a big storm. To prepare for all these threats, Florida Gov. Ron DeSantis has declared a state of emergency, freeing up resources to prep for the storm.

Here’s the latest forecast map from the NHC.

And here are the key messages the National Hurricane Center wants you to know:

1. The risk of life-threatening storm surge and hurricane-force winds this weekend continues to increase in the northwestern Bahamas, and hurricane watches could be issued there tonight or Friday. Residents should have their hurricane plan in place and listen to advice given by local emergency officials.

2. There is an increasing likelihood of life-threatening storm surge along portions of the Florida east coast late this weekend or early next week, although it is too soon to determine where the highest storm surge will occur. Residents should have their hurricane plan in place, know if they are in a hurricane evacuation zone, and listen to advice given by local emergency officials.

3. The risk of devastating hurricane-force winds along the Florida east coast and peninsula late this weekend and early next week continues to increase, although it is too soon to determine where the strongest winds will occur.

4. Regardless of the exact track of Dorian, heavy rains are expected to occur over portions of the Bahamas, Florida, and elsewhere in the southeastern United States this weekend and into the middle of next week.

It’s still a few days out, so remember: Forecasts can change. As the Washington Post notes, Dorian may turn to the north before hitting Florida, sparing the state the worst.

The good news is there’s still a lot of time to prepare.

Sucking CO2 out of the atmosphere, explained
Omarosa Manigault Newman seeks to join pay discrimination suit against Trump
How America gave up on fighting the pandemic and saving the economy
The recent spike in tensions between India and Pakistan, explained
Why Democrats just gave away their best chance at ending the trans military ban
Code [email protected]