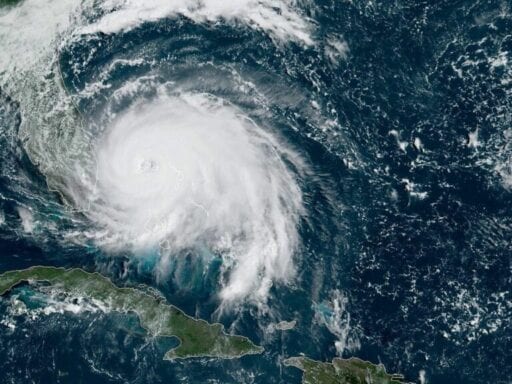 A worst-case scenario is playing out the Bahamas. Florida and the Southeast US may be spared the worst. But uncertainties remain.

Dorian is estimated to be the second-most powerful hurricane ever recorded in the Atlantic Ocean, and ties the record for the most powerful storm to make landfall, according to the National Weather Service. Preliminary reports from the Abacos Islands show extreme devastation.

The storm weakened slightly and was (very slowly) moving through Grand Bahama Island on Monday, with winds gusting over 200 mph and 18 to 23 feet of coastal flooding. Plus, the forward motion of the storm nearly stalled, moving west at just 1 mph. The slower a storm moves, the more time it has to destroy communities in its path. It’s a worst-case scenario for a hurricane.

“Devastating winds and [10-to-15 feet of] storm surge will continue to affect Grand Bahama Island for several more hours,” the National Hurricane Center reports. “Everyone there should remain in shelter.” The NHC also warns of “extreme flooding” due to a possible 30 inches of rain that have fallen.

Since making landfall on Grand Bahama Island 24 hours ago, #HurricaneDorian has only traveled about 40 miles. The eye of #Hurricane #Dorian remains parked near the north edge of the island. pic.twitter.com/yxxRu0Fx9u

As of Tuesday morning, the storm had weakened a bit, sustaining 120 mph winds, making it an dangerous Category 3 “major” hurricane. (Major hurricanes are Category 3 and higher.) Winds near that intensity have the power to destroy homes. It’s a dangerous situation.

The storm is not currently expected to make landfall in Florida, but instead, to stay uncomfortably close offshore.

However, the NHC warns that even small changes to the forecast can bring intensely dangerous conditions to the coast. ”A relatively small deviation to the left of this track could bring the core of the hurricane near or over the coastline,” the NHC reports.

“Life-threatening storm surge and dangerous hurricane-force winds are expected along portions of the Florida east coast and Georgia coast, regardless of the exact track of Dorian’s center, ” the NHC advises. “Residents should listen to advice given by local emergency officials.”

Again, it’s possible Dorian could make landfall on the US East Coast. So pay attention to reports. To prepare, some counties along the Florida coast have issued evacuation orders for certain residents. You can see all of those orders here. Georgia Gov. Brian Kemp has ordered evacuations for six coastal counties. And evacuations have also been ordered in South Carolina as well.

Here’s is the 5 pm @NHC_Surge forecast for #Dorian: Water could reach these heights above ground if peak surge occurs at the time of high tide:

1. Devastating winds and storm surge will continue to affect Grand Bahama Island for several more hours. Everyone there should remain in shelter.

2. Life-threatening storm surge and dangerous hurricane-force winds are expected along portions of the Florida east coast and the coasts of Georgia and South Carolina, regardless of the exact track of Dorian’s center. Water levels could begin to rise well in advance of the arrival of strong winds. Residents in these areas should follow advice given by local emergency officials.

3. The risk of life-threatening storm surge and hurricane-force winds continues to increase along the coast of North Carolina. Residents in these areas should follow advice given by local emergency officials.

4. The flash flood threat will increase today and tonight along the Florida peninsula, then spread up the southeast and mid-Atlantic coast during the middle and latter part of the week.