Hurricane Florence will slow down. That’s a bad thing. 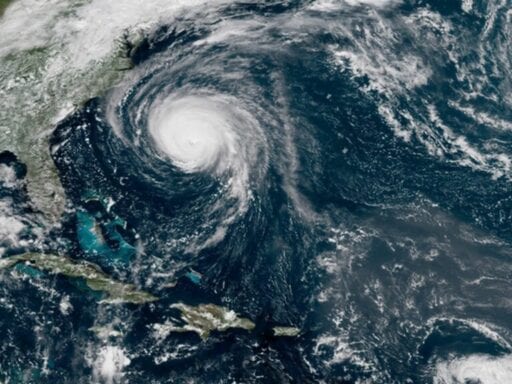 The storm is set to bring a mind-boggling amount of rain to the Carolinas.

Earlier in the week, forecasters were warning that Hurricane Florence had the potential to hit North Carolina as a Category 4 storm, with 140 mph winds. Now it’s looking like Florence will, in terms of wind speed, be a more modest storm, with 100 to 120 mph winds, a Category 2 or 3.

But do not take that to mean Florence will be a weak storm. “The threat to life from storm surge and rainfall will not diminish, and these impacts will cover a large area regardless of exactly where the center of Florence moves,” the National Hurricane Center warns.

Here’s what makes Florence dangerous: By the time it approaches the North and South Carolina coasts Friday, it’s expected to slow down or even stall.

Forecasters say it could be more than two days before the storm leaves the region. You can see that here in the latest forecast track. Florence will be just off the shore of North Carolina early Friday, and by Sunday, it will have barely crept inland. From there, the cone of uncertainty — the area where the storm could conceivably move — grows very wide.

You may recall that stalling is what made Hurricane Harvey such a catastrophic event for Houston last year. Slower forward movement means a hurricane has more time to inundate a region with rain and storm surge. It’s a longer time to blow dangerous, power line-snapping winds.

Wind speed, which determines hurricane category number, is just one aspect of what makes a storm dangerous; another is rain. And with Florence stalling, the Carolinas and the Southeast are going to see an epic, dangerous amount of it.

This all means extreme amounts of rain are possible: 20, 30, or even 40 inches are expected to occur in coastal areas of North Carolina. That would break the state’s rain record for a tropical storm or hurricane, the Washington Post reports.

In all, 10 trillion gallons of water may be dumped on the region, which may lead to rivers overflowing and causing life-threatening floods inland.

Brutal. Both the UK and US models show Florence moving about 50 miles over the span of two days; Friday and Saturday. https://t.co/kVR8xsuiOR

It’s always concerning when rainfall totals are measured in feet. But here’s something else to pique the concern: The ground is already wet. “The middle Atlantic and the Appalachian regions are 150 to 300 percent above normal in terms of precipitation” for this time of year, Colorado State University atmospheric scientist Chris Slocum says. That means less water can be absorbed into the ground, and more runs off into flooding rivers.

He also adds that over the past day, the storm has increased in size (in terms of how far our tropical storm-force winds extend) from 57,000 square miles to 86,000 square miles. “It’s kind of like going from the size of the state of Georgia to the size of the state of Minnesota,” he says. It makes it more likely that Florence’s effects will be felt over a wider area. It’s also another reason not to put too much weight on where exactly the storm will make landfall. Regardless, it’s going to impact a wide area.

Saturated ground with intense rain is a recipe for the “catastrophic flash flooding and significant river flooding” that the National Hurricane Center warns could happen inland from the coast.

Why Florence will stall

Florence is predicted to stall because there’s a region of high-pressure air to the north of it that it cannot cut through. That “increases the uncertainty in the forecast” after landfall, Slocum says. Right now it’s really hard to say how wide of a region — whether it’s inland Georgia, South Carolina, North Carolina, or Virginia — will see the worst of the rain. The whole region needs to be prepared.

The worst-case scenario may be if Florence stalls offshore. That could greatly increase the amount of rain it can drop, meteorologist Jeff Masters explains at Weather Underground. Open water is hurricane fuel; the longer Florence lingers over the water, the more moisture it can collect. (Though, eventually, the hurricane will cool the water enough that its intensity starts to wane.) “There is also the danger that Florence could make landfall, then emerge back over water and re-intensify, increasing its rainfall potential,” Masters writes. “In any case, Florence’s rains will bring catastrophic flooding to a large region along the track of the storm.”

This stalling behavior — like we saw with Hurricane Harvey and are likely to see with Florence — may be a harbinger of things to come. Some climate models predict that in a warming world, tropical storms will move more slowly, wreaking greater pain on the communities they come across.

And research suggests wetter storms are in our future. In May, the National Center for Atmospheric Research published a study in the Journal of Climate simulating a what-if scenario on 22 recent hurricanes. The question: What if these storms formed at the end of the 21st century, in a warmer world?

In the simulated model, the hurricanes didn’t grow that much more intense, but they almost all became wetter, spewing more rain. On average, the model found a 25 percent increase in rainfall across the storms — enough to make the difference between a bad flood and a catastrophe.

Last year, Hurricane Harvey was a flooding catastrophe. That was partly due to the fact that it hit a city of 2.4 million people, with flood-prone geography. Legacy infrastructure and city zoning issues also made Houston prone to floods. But it was also partly due to a super-wet storm.

It’s too soon to say if Florence will cause flooding on the scale of Harvey, but some of the right elements are in place.