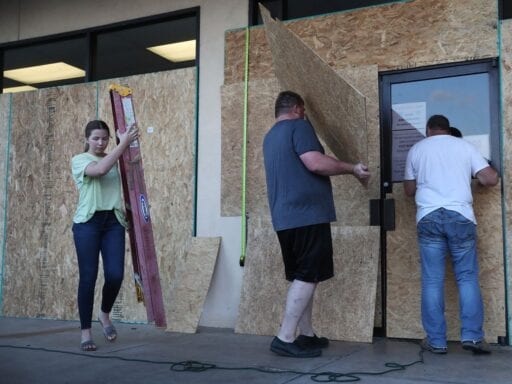 Share
Loading...
Residents board up a building in Lake Charles, Louisiana, in anticipation of Hurricane Laura, which is expected to make landfall Wednesday. | Joe Raedle/Getty Images

The storm barreled toward Texas and Louisiana during the 15th anniversary of Hurricane Katrina.

The National Hurricane Center is warning that Hurricane Laura will cause an “unsurvivable storm surge” reaching 30 miles inland and rising up to 20 feet as the storm made landfall in Texas and Louisiana after midnight on Thursday morning as an “extremely dangerous” Category 4 strength, with winds reaching 140 mph.

“The storm surge flooding is starting now in Louisiana,” Edwards said. “It’s well ahead of the storm. It will just get worse over the next day or so.”

Texas Gov. Greg Abbott implored residents to evacuate. “The conditions of this storm are unsurvivable, and I urge Southeast Texans to take advantage of these final few hours to evacuate, secure their property, and take all precautions to keep themselves and their loved ones safe,” he said at a Wednesday press conference.

About 20 million people reside in the path of the storm and more than 500,000 have been ordered to evacuate, a task complicated by the Covid-19 pandemic.

“The combination of a dangerous storm surge and the tide will cause normally dry areas near the coast to be flooded by rising waters moving inland from the shoreline,” the NHC reported in its latest hurricane bulletin. Storm surge, where high winds push water inland several feet above high tide, is often the deadliest consequence of hurricanes.

Hurricane #Laura is arguably the most widespread catastophic storm #surge threat to the U.S. coastline since Sandy in 2012. Take these forecasts seriously. 90% of historical deaths in hurricanes are from water. If you’ve been asked to evacuate, do so immediately! https://t.co/AjWZaZlnuG

Laura may also spawn tornadoes and drench the Gulf Coast with up to 10 inches of rainfall. Initially, Laura was projected to make landfall alongside Hurricane Marco, but Marco weakened to tropical storm strength and quickly fizzled out as it made landfall on Tuesday.

Laura, on the other hand, underwent rapid intensification, a hallmark of several recent major hurricanes. Rapid intensification is defined as a gain of 35 mph or more in wind speed over 24 hours. In Laura’s case, the storm went from below hurricane strength with 65 mph winds early Tuesday to Category 4 strength on Wednesday, then weakened somewhat after hitting land, with winds still dangerously high.

The storm’s landfall comes amid an unusually active hurricane season, one that the National Oceanic and Atmospheric Administration predicted back in May.

For Gulf Coast residents, Laura is stirring eerie echoes of past storms. Hurricane Harvey in 2017 swept over Texas at Category 4 strength and inundated Houston with a gargantuan amount of rain that left the city soaked for weeks.

Laura is also making landfall around the 15th anniversary of Hurricane Katrina, a Category 5 storm that resulted in 1,200 deaths as it struck New Orleans. Both Harvey and Katrina are tied as the costliest storms on record. Laura is now the strongest August hurricane in the Gulf of Mexico since Katrina, Colorado State University meteorologist Phil Klotzbach told USA Today.

The destruction these storms caused was fueled by coastal development in vulnerable areas as well as climate change amplifying sea-level rise, and the damaging elements of extreme weather like heavy rainfall.

It’s likely Laura will also come with a high price tag. “I do expect this to be a multi-billion dollar disaster,” said meteorologist Jeff Masters on a conference call with reporters on Tuesday.

A look at #Laura from above as it pushes closer to the landfall expected as a Category 4 hurricane overnight tonight. Laura will bring with it:

The window to prepare is nearly closed. Do so NOW. pic.twitter.com/5vbV04GFFE

Obama’s HBCU commencement speech doubles as an indictment of the Trump era
Read William Taylor’s full testimony in the impeachment inquiry
Today is Black Women’s Equal Pay Day. Here’s what you should know about the gap.
Silicon Valley billionaires’ strange new respect for Elizabeth Warren
National Guard troops from DC, Maryland, and Virginia deployed after Trump supporters take over the ...
A New Year’s resolution for everybody: cook more