Hurricane Michael is heading to Florida and the Southeast. Here’s what we know. 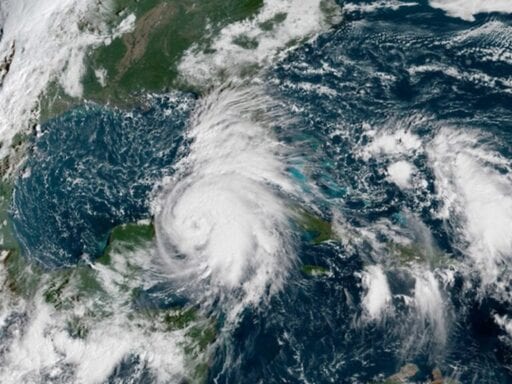 The storm is expected to make landfall on Florida’s Gulf Coast Wednesday.

Hurricane season isn’t over yet.

Hurricane Michael, a storm that spun up in the Atlantic over the past several days, is currently grazing Cuba and Mexico’s Yucatan Peninsula. Monday and Tuesday, the storm is expected to intensify as it travels across the Gulf of Mexico.

Forecasters now expect the storm to hit Florida’s northern Gulf Coast — the Panhandle and surrounding areas — by late Wednesday. On Monday afternoon, the National Hurricane Center issued hurricane warnings — meaning hurricane conditions are expected within 48 hours — for much of the Florida Gulf Coast.

“A potentially catastrophic event is developing,” the Tallahassee office of the National Weather Service warns.

By the time it hits, Michael is expect to be a “major hurricane,” meaning Category 3 or higher, with winds in excess of 110 miles per hour. The storm is currently Category 1. “Life-threatening storm surge is possible along portions of the Florida Gulf Coast regardless of the storm’s exact track or intensity,” the National Hurricane Center warns.

Don’t pay too much mind to the category rating. Hurricanes are dangerous regardless of their exact windspeed because they can push deadly storm surge ashore and inundate areas with rain.

To prepare, Florida Gov. Rick Scott declared a state of emergency for 26 counties and ordered 500 members of the National Guard to activate. Storm surge (i.e., coastal flooding, often the deadliest aspect of a hurricane) is expected to top 7 to 11 feet in some areas (see the map below). The storm is also expected to pass through Tallahassee, the state’s capital with a population of 382,000.

It’s unclear right now how bad the storm will be. But generally, forecasters are better at predicting a hurricane’s path than its intensity. Michael could be stronger or weaker than forecast. But what’s important is to see where it’s heading, and make preparations if you’re in harm’s way.

Here’s the latest forecast track from the National Hurricane Center:

And here’s the forecast for the arrival of tropical storm-force winds:

Here’s the forecast for rainfall potential. Some isolated areas along the coast may see more than 10 inches.

And a storm surge watch, meaning storm surge conditions are possible within 48 hours, is in effect for much of the Gulf coastline.

Check out this interactive map on the National Oceanic and Atmospheric Administration’s website to see preliminarily storm surge predictions for specific communities.

Some areas may see storm surges in excess of 11 feet. That’s 11 feet of water on top of the normal high tide.

Based on 11 AM EDT NHC storm track & category 3 intensity, Florida’s big bend sees a storm tide of 15’ (storm surge 11’ above high tide). This track is a worst case scenario for the funnel shaped Apalachee Bay & its associated estuaries. #Michael pic.twitter.com/ScmU5Yu0K2

Lastly, here are the key messages the National Hurricane Center wants you to know about the storm:

1. Life-threatening storm surge is likely along portions of the coasts of the Florida Panhandle, Big Bend, and Nature Coast, and a storm surge warning is in effect for these areas. Residents in these areas should follow all advice given by their local officials.

3. Heavy rainfall from Michael could produce life-threatening flash flooding from the Florida Panhandle and Big Bend region into portions of Georgia and South Carolina.

4. Hurricane conditions will continue in portions of western Cuba through this evening, where a hurricane warning is in effect.

5. Michael is expected to produce heavy rainfall and flash flooding over portions of western Cuba and the northeastern Yucatan Peninsula of Mexico during the next couple of days.

As with all hurricanes, Michael is a potentially deadly situation. It’s also likely that after the storm crosses Florida, it will impact southeastern Atlantic states like Georgia, Alabama, South Carolina, and North Carolina, which are still recovering from Hurricane Florence. So keep an eye on it.

Trump’s purge
Why Arizona is suffering the worst Covid-19 outbreak in the US
The scandals swirling around QAnon-supporting Rep. Marjorie Taylor Greene, explained
3 charts showing the alarming decline of Arctic sea ice this year
What the new IG report about the gassing of protesters around Lafayette Square actually says
A major climate report will slam the door on wishful thinking