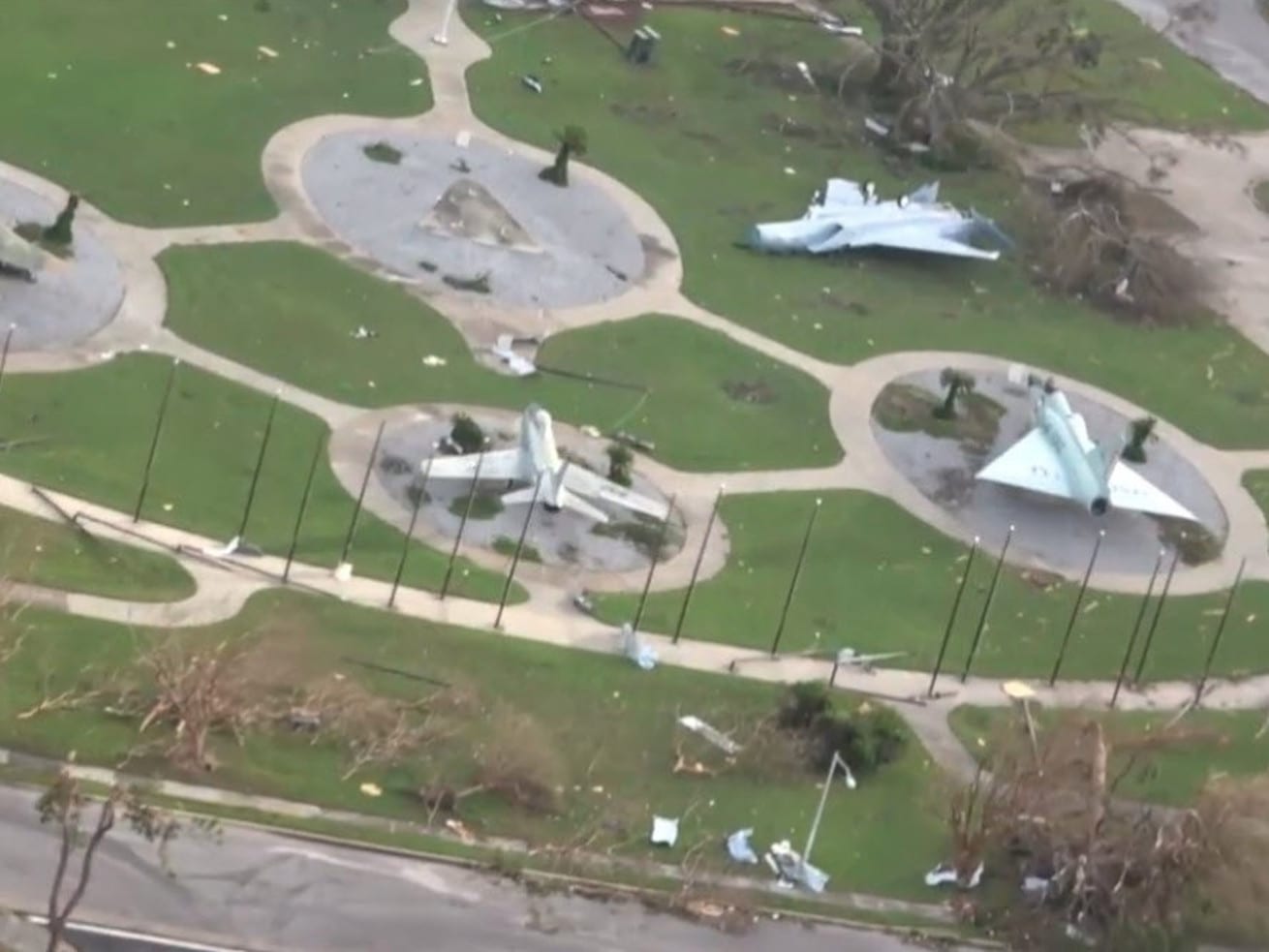 The military says climate change is a “threat multiplier.” It’s still struggling to prepare for those threats.

Tyndall Air Force Base near Panama City, Florida, took a direct hit and suffered heavy damage. “The flight line is devastated. Every building has severe damage. Many buildings are a complete loss,” according to the base’s most recent storm damage update.

Tyndall Air Force Base suffered extreme damage from Hurricane #Michael as it came ashore. Nearly every structure on base suffered roofing damage according to the base commander. #flwx #tropics pic.twitter.com/9WeXTwMSu4

Of particular concern were the base’s F-22 Raptor aircraft, the most sophisticated fighter jet in the Air Force’s arsenal. The stealth fighters cost $377 million apiece (if you include research and development costs), and the Air Force has 183 of them in its inventory.

Tyndall is home to 55 of those F-22s. The New York Times reported that 33 of the Raptors were sent to Wright-Patterson Air Force Base in Ohio, leaving several of the highly valuable aircraft in the path of the storm. A spokesperson for the Air Force declined to give any tallies for damaged aircraft at Tyndall, saying that crews are still assessing the scale of the damage.

We don’t yet know the full extent of the damage across Tyndall or to the F-22s in particular. Reports now indicate that most of the F-22 aircraft that remained at Tyndall survived the storm intact and with repairable damage.

But the fact that expensive hardware was housed in exposed structures on the Gulf Coast illustrates how vulnerable the military is to extreme weather, especially as storms like hurricanes gain a boost from climate change.

It also shows that the military is on the front lines of the consequences of rising temperatures. Conflicts exacerbated by drought, heat, and storms are a major concern for defense planners. Military installations themselves are also at risk: At least 128 bases face inundation from sea level rise.

With billions of dollars of assets in harm’s way and more weather extremes on the horizon, making and enacting disaster plans are becoming all the more critical for the military.

F-22s are hard to move, but the Air Force should have seen this coming

While Hurricane Michael was the first Category 4 storm to make landfall in the Florida Panhandle on record, major hurricanes have struck the region in the past.

Major hurricane landfall is rare. I did some research and was surprised to find that since 1851 there have been only 6 major hurricanes to make landfall within 75 miles of Panama City Beach. All were Category 3.

Four of these were in the 1800s. pic.twitter.com/RsdaYZUVs4

Tyndall Air Force Base spans more than 29,000 acres and is home to almost 4,000 active military personnel. Officials say that base staff and their families were evacuated ahead of the storm, and since Michael passed, no fatalities or injuries were reported.

But the base’s runways sit adjacent to barrier islands (including the aptly named “Hurricane Island”) and were particularly at risk for damage from extreme weather. A hangar on the base even served as a refuge for other Raptors in May as Subtropical Storm Alberto hit the region.

Tyler Rogoway at The Drive wrote a compelling explanation for why all the valuable aircraft weren’t simply flown out of harm’s way:

At modern fighter is not a Honda Accord. You don’t just hop in it and drive it around for months until you finally have to take it for a one-hour oil change when the light comes on. If anything, they are far more akin to high-end sports cars that require a lot of expensive TLC to keep operating. The F-22, in particular, is more analogous to an exotic supercar or even a high-end race car than anything else. It requires dozens of hours of maintenance for every single flight hour and deep maintenance can take days or even many weeks to accomplish, depending on what is needed to be done and availability of spare parts, which can be scarce.

The aircraft that weren’t removed were likely undergoing maintenance and couldn’t be readied in time for transportation, especially given that Hurricane Michael gained strength so fast.

Thx for writing this. Well done. Only facts I’d add is that Michael went from depression to Cat 4 landfall in ~ 72 hours… and this developed over a holiday weekend.

However, given that there are so few F-22s overall (the Air Force has more than 400 F-15s and more than 1,000 F-16s) and that Raptors are no longer being manufactured, each lost or damaged F-22 presents a large loss of capability.

Risks to military installations are increasing due to climate change

Water temperatures in the Gulf of Mexico were 3 to 5 degrees Fahrenheit higher than is typical this time of year. Michael’s rapid ramp-up also comports with what scientists expect from global warming. “As the climate continues to warm, hurricanes may intensify more rapidly just before striking land, making hurricane forecasting more difficult,” wrote Massachusetts Institute of Technology climate scientist Kerry Emanuel in a 2017 paper in the Bulletin of the American Meteorological Society.

For its part, the military has been blunt about the risks posed by climate change, describing it as a “threat multiplier.”

“The effects of a changing climate … will impact our security situation,” said Defense Secretary James Mattis during his confirmation hearing. The military assembled an adaptation roadmap in 2014, chalking out how they plan to contend with climate change. Plans include raising coastal infrastructure, protecting vulnerable supply chains, and increasing disaster training.

And the head of the National Guard, Air Force Gen. Joseph Lengyel, told Vox’s Alex Ward last week, “There’s a lot of storms coming our way. Whatever the reason, we have to be ready to deal with them.” However, Lengyel waffled on humanity’s role in shaping the climate behind these storms. “I believe the climate is changing. I don’t know why,” he said.

However, as Hurricane Michael showed, there’s a vast gulf between acknowledging climate change and adequately preparing for it. Either there was a plan in place to deal with an unprecedented storm at Tyndall and it wasn’t followed, or there wasn’t one, and we’re already seeing the consequences.

Poor kids spend nearly 2 hours more on screens each day than rich kids
Sheryl Sandberg on the “double-double shift” women are working during the coronavirus
Baby Yoda: The Mandalorian’s adorable alien costar, explained
Trump is reportedly planning to promote Ken Cuccinelli to a top position at DHS
How Robert Pattinson transformed into a salty lighthouse keeper for his new movie
A casino company is buying Barstool Sports in a $450 million deal