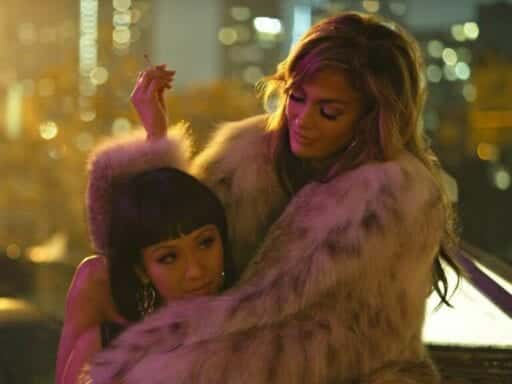 “I was excited to look at these women in ways we aren’t used to looking at them.”

On the surface, Hustlers sounds like a cross between a flashy tale of a glamorous strip club and a Robin Hood story. Young stripper Destiny (Constance Wu) becomes close friends with Ramona (Jennifer Lopez), the undisputed queen of a Manhattan club frequented by Wall Street high rollers. But when the 2008 recession hits, the women find themselves on hard times and hatch a plan to extract money from unsuspecting men — and it works.

Lopez and Wu anchor the film, but Hustlers also features an outstanding supporting cast (including Keke Palmer, Lili Reinhart, Lizzo, Cardi B, and Julia Stiles as the journalist interviewing Destiny and Ramona about the story). The story is less a flashy caper than a look into the effects of the recession through a more intimate, less political lens, a la other films like The Girlfriend Experience and Magic Mike.

Hustlers is directed by Lorene Scafaria (who wrote Nick and Norah’s Infinite Playlist and wrote and directed Seeking a Friend for the End of the World), whose take on the story squarely centers the women — few men have more than a passing role in the story — and especially the symbiotic partnership between Destiny and Ramona. I spoke with Scafaria by phone about the relationship at the heart of the film and what it’s like to film this unique kind of strip club story. Our conversation, which follows, has been edited for clarity and length.

Hustlers is based on a New York Magazine story published in 2015. How did you get interested in developing the story into a film?

I missed the story when it first came out, but I read it in 2016, and I was immediately drawn to it as a film. It’s such an incredible world to see from a perspective that we haven’t seen a lot of, even though there are strip clubs in every movie and TV show. So I was really excited to tell the story from [the strippers’] point of view.

I was also really interested in the friendship story. It felt like there was something more in between the lines — the story of these two women who became friends and formed this business together, and then here they are being interviewed separately years later.

And there was a lot I wanted to talk about, like the American Dream and everything that happened as a result of the 2008 financial crisis.

The idea of the American Dream is a really interesting part of Hustlers — I thought a lot about movies like The Girlfriend Experience while watching the movie, along with other movies that look at how recessions affect not just the wealthy, but people in professions that aren’t obviously linked to economic downturns. Was that part of your thinking?

Yes. There are a lot of movies that I think have touched upon these themes — The Wolf of Wall Street or movies like The Big Short — which explain [financial downturns] from the bullpen. But I’m really interesting in seeing the impact that the 2008 recession had on these women who worked in Wall Street’s backyard. The financial crisis had an impact on everybody. The value of $20 changed. What [a client] expected for $20 was different from what [a stripper] was willing to do for $20. So it had a profound impact on their industry.

I met with a lot of strippers and strip club employees, former and current, and that only reinforced that thesis more, that 2008 really did change things. A lot of the dancers quit and became bartenders or managers. Of course, strip clubs are still going, but technology has changed those, too; the recession happened right when the iPhone was released. Everything collided at the same time. It was a turning point culturally.

[In writing Hustlers], we looked at sports movies. because I feel like there’s so much athleticism involved in [the strippers’] jobs. We looked at crime movies and gangster movies, to see where things get out of control. It is a typical rise-and-fall story, after all.

But I also wanted to incorporate a journalist into the story. And I wanted to talk about female friendships. So we watched movies about those kinds of relationships, when two people meet and it’s electric, and you make one of those friends that can get you out of trouble but also get you into a lot of trouble. That sisterly relationship that these characters have — that was an important part of what we wanted to explore.

I’ve heard people say that the only two recession-proof industries are undertakers and sex workers. But it’s interesting in this case, because they’re not sex workers. They’re entertainers. And yet having worked at the club makes it difficult for them to go out into the world and get a different sort of job when needed. You dramatize that situation in the movie.

Yeah, there is a stigma [against strippers].

There’s a stigma against them, even though the women are also smart, powerful, creative, capable, and inventive. They’re not one-dimensional characters at all.

That was part of the beauty of making this movie. I was excited to look at these women close up — from the neck up — and in ways that maybe we aren’t used to looking at them.

I just felt akin to them in some way; part of my job is often to stand in front of people “doing the dance,” trying to get money to put together a movie.

One surprising thing about the movie is that, as you said, we’re so used to seeing strip clubs in the movies. And there’s definitely a lot of skin in this one! But something about the way the club and the women and men in it are depicted on screen feels different, somehow, from what we’ve seen before. It’s like we’re seeing the strippers as they think of themselves rather than as someone else looks at them. From a visual standpoint, how did you think about that?

I wanted to show the normalcy of their lives, to see from their point of view. But it’s also the story they want us to tell. And there’s a theme of control that runs through the movie.

There are scenes where I think Ramona is in total control — possibly all of them! — of the camera. But in some scenes, like her first dance or when we find her on the rooftop, there’s a bit of a fantasy quality, because in those scenes Destiny is telling us her version of the story of meeting Ramona.

For some of the girls onstage, they feel powerful. Jennifer [Lopez] said that she felt really powerful up there, but that there are other moments where you’re completely insecure, feeling vulnerable. So we tried to have the camera match where our characters were depending on who was in control of us at that moment.

Something that goes along with control is power, and in some ways I think you could think of this as a “girl power” movie. But it’s much more complicated than that: After all, what they’re doing in the second half of the movie is a crime! How do you navigate the tricky balance of creating powerful, empathetic characters we can root for while also knowing that they’re doing a morally reprehensible thing?

This was not a manufactured female story. It’s very much about being women; it’s very much about characters who have to be women in order for the story to exist. In that way, it feels more organic than a lot of scripts I’ve read or been sent over the years, once “female empowerment” became a genre a few years ago.

I wanted to stay true to what happened: The crimes themselves, the punishments. I didn’t want to water down what they did. But I also didn’t feel like I needed to embellish the really bad behavior in the club or the daily microaggressions and aggressions that these women faced — maybe all women face, but typically at the clubs.

I hope people see the movie and feel that sisterhood and friendship that I think is part of what works for these women. They needed that family dynamic that they created for themselves.

That friendship, sisterhood, and family aspect is the core of the story. Ramona and Destiny’s relationship almost feels, beat for beat, like a romance.

I met with Jennifer first. There was nobody else for Ramona but her. It took a really long search to figure out who Destiny was, and the minute I met with Constance, I was so enchanted and excited about the idea of her in this role and the two of them opposite each other. I thought that they would have great chemistry together. They’re very different actors, but they also have similarities. They’re both so gifted and complex.

I saw them together for the first time at the camera test and immediately felt that electricity between them. They felt like a big sister and a little sister immediately. Watching that relationship unfold on screen and on set was a beautiful thing.

It really is a love story at its heart, whether the people want to call it friendship or love. Family runs deep, and female friendships run really deep. Sisters fight, and you can have a really complicated relationship with the person that you love and rely on the most. And of course, the two of them have different value systems and come from different places and approach the world differently.

But there’s something so symbiotic about them. So, seeing Constance and Jennifer, two stars who are in different parts of the sky, brought together — it was beautiful.

Hustlers opens in theaters on September 13.

Why are “sexy” cats a thing?
How to watch Friday’s Democratic debate in New Hampshire
America’s contradictions are breaking wide open
3 scientists sped up evolution in a lab. Their work just won a Nobel Prize.
The best $40 I ever spent: A not-quite-tarot deck
It’s easier than ever to make hand sanitizer. But eased restrictions have come with consequences.