I am Native American and a former football player. Our history is much darker than racist mascots. 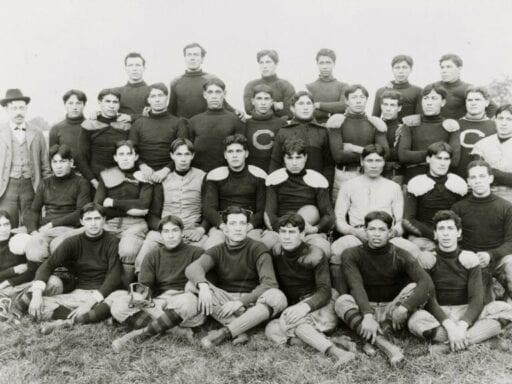 An NFL team changing its name does nothing to address the role of Indigenous people in the game’s legacy.

I come from Chatsiks-si-Chatsiks and Chahta communities in Oklahoma. I also was a safety for the Pomona-Pitzer college football team in California. This juxtaposition is not rare. There is a long history of entanglement, violence, and complicated feelings between Indigenous peoples and American football.

On Monday, I celebrated as Washington, DC’s NFL team announced their plan to change its name and mascot from a racist caricature that has been deeply offensive to me and Indigenous communities across the country. Then, on Thursday, 15 female employees of the team came forward with accusations of sexual harassment in a Washington Post report. The team, and the NFL at large, is corroded from the inside.

While the retirement of the Washington name culminates decades of activism from Indigenous peoples across the country, it is also hard knowing that this change — primarily motivated by the loss of financial sponsorships like FedEx — has taken so long to secure. It also reflects the most-highlighted role that Indigenous peoples have played in America’s favorite sport — as mascots, rather than actual people.

Sally Jenkins’s book The Real All Americans makes the argument that America’s fascination with its own brand of football began at roughly the same time as the closing of the Western frontier. The question of conquest had largely been settled, so what would satiate this desire for Manifest Destiny and the glory it brought upper-class young men, often in America’s oldest and most prestigious universities? A game that is also violent, made up by schoolboys, seemed as good a plan as any. “It was as though America, at a loss for what to do with itself once the wilderness was subdued, had hit on football as an answer,” says Jenkins.

At the same time, the losers of the Indian Wars, my ancestors, found themselves becoming acquainted with a new form of American retribution — the educational system. The National Native American Boarding School Healing Coalition estimates that between 1869 and the late 1960s, hundreds of thousands of Indian children were taken out of their communities, away from their families and placed in residential schools run by the federal government and churches. While these schools were tasked with the care of Indigenous youth, the coalition notes these institutions were sites of significant physical, sexual, cultural, and spiritual abuse. The violence of war against Indigenous peoples had not gone away. It had been institutionalized.

Yet, like generations of ancestors before them, those Indian children would resist — in the classroom, in their communities, and for some of them, they would resist on the football field. Those boarding school teams, in particular the Carlisle Industrial Indian School in Pennsylvania, are the stuff of legend. In the early 1900s, teams from Carlisle — with players ranging in age from 12 to 25, according to Jenkins — would go on to defeat nearly every major American power in the game, including Harvard, Penn, and Minnesota. The 1912 team would defeat Army, replaying the conflicts of a generation before. Famously, before the game, Carlisle’s coach, Glenn “Pop” Warner, inspired the team by telling them to “go read their history books.”

I like this story. I like the idea that a group of boys took a game not made for them and seized its consciousness from nowhere. I like the idea that in doing so they grabbed a small temporal sense of agency as nearly everything else was grabbed from them. I like the feeling of carrying that tradition — the grandson of a former cornerback and a boarding school survivor.

In my own playing career, my father recounted this history to me often, reminding me that football, deep in its American core, was our game. An Indigenous game. I have no doubt that this was primarily meant to inspire me before playing. But I also think it was a small way of trying to preserve a history knowable to him. A series of recollections that would help him walk easier in a sport, and a society, often indifferent or worse to our existence.

This makes my appreciation of the game complex. I love football. It has given me an outlet of agency. It has made me feel supported and secure in a world that readily dislocates Indigenous peoples. It connects me to my family and our ancestral home in a unique way. Football has made an indelible mark on my life.

In my own playing career, my father recounted this history to me often, reminding me that football, deep in its American core, was our game. An Indigenous game.

But as my body tells me after years of the game, football, in its basest form, is ordered violence. “Of the games I know, football comes closest to war without falling over the border and becoming war pure and simple,” says Mark Edmundson, author of Why Football Matters. It makes sense then that survivors of boarding schools took so easily to the game. To find a space in which that violence could become triumph must have been a salve in hell.

But finding a respite in this way is also not the same as healing this history. The outcomes of Native youth tell us as much. A 2014 White House Report on Native Youth notes that Native children have suicide and PTSD rates three times the national average. The only comparable demographic in this regard are Iraq War veterans.

The story of Carlisle tells a more appropriate picture of the involvement of Indigenous peoples in American football. Often painted as lifeless and dull caricatures, we have been objects of fervor, desire, or guilt. But rarely are we allowed to be characters of our own humanity. If this was the case, perhaps the real Indigenous peoples who helped shape the game would be more well-known than a racist mascot. Perhaps our very real conflicts would be more appreciated than they are.

I’m thankful today that the name has changed. For a franchise in America’s most popular sport to recognize its harm and course correct is valuable. But this was not done out of an elevation of moral or ethical conduct. There has been no acknowledgement that the origins of the game itself are a part of football’s racist involvement in Indigenous history. At some point, the financial cost of maintaining the name outweighed keeping it. So it changed.

It is worth noting that the team’s financial consideration has only come about because of the protests against police violence on Black Americans. But if there is a football season this fall, there will still be racist mascots in the game. There will still be worrying rates of chronic injuries to a largely Black player base. There will be no guarantee that the stardom afforded those Black players will protect them from brutality off the field. I believe that we, as a football collective, and as a nation, are reforming. I wonder if we are transforming and healing.

Football has been a notable part of my life and the lives of my family. But I cannot pretend that it does not bring out some of our worst communal instincts. So I have to ask, when the games are played and we turn off our televisions and collectively look at our reflections on the screen, do we like what we see?

Rory Taylor is a Ckiri/Chahta journalist covering Indigenous politics, policy, and culture. He currently lives on the territory of Ngāti Whātua Orākei in Tāmaki Makaurau, where he is pursuing a master’s degree in Indigenous studies at Te Whare Wānanga o Tāmaki Makaurau.

HR experts: We’d nip Biden’s behavior in the bud
Joshua Brown, a key witness in the murder trial against Amber Guyger, was fatally shot
We don’t know yet if lockdowns are working. But we could see results as early as this week.
Paul Ryan: “The president must appreciate that Russia is not our ally”
How Congress is preparing for the coronavirus
Roger Stone was just sentenced to 40 months in prison