I confronted Scott Pruitt in a restaurant. I’d do it again in a second. 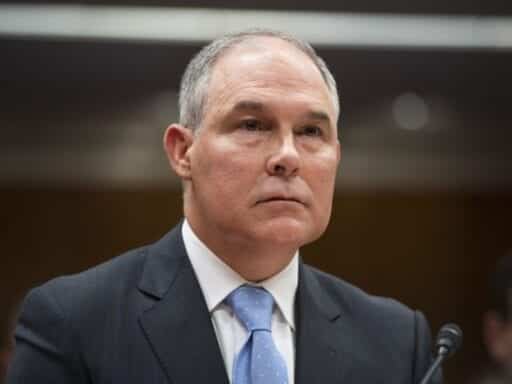 We’ve all got to do what we can.

When I saw Environmental Protection Agency Administrator Scott Pruitt in a tea house last week, I walked up to him and told him to resign. Three days later, he was gone. I obviously can’t claim credit for his departure, which was long in the making. But I would like to think I provided a helpful nudge.

I’m a middle-school teacher and the mother of a 2-year-old. I was at lunch with my family last Monday in the Penn Quarter neighborhood in Washington, DC, when Pruitt sat down only a few tables away. When my husband pointed him out, I knew I had to say something.

I scribbled a couple notes on the back of my receipt, gathered my nerves, and walked up to the man who spent his work days rolling back decades of policies protecting humanity, on behalf of wealthy industry friends who make more money when they’re allowed to produce more pollution. I introduced my child, whose future Pruitt is endangering, rattled off just a few of his damaging policy decisions, and told him to resign before his scandals pushed him out.

That afternoon, new revelations of Pruitt’s rampant corruption became public, and a video of me — a mom with toddler in tow — speaking some truth to his power went viral. I got to spend three straight days blasting his retrograde policies in the news media. On the third day, Pruitt resigned.

I only added a little extra gasoline to the dumpster fire of his scandal-ridden tenure, but I was proud to join the long-standing efforts of environmentalists, activists, investigative journalists, and whistleblowers across the country cranking the heat up to levels even this administration couldn’t endure.

The civility debate is a distraction technique

Some say it wasn’t “civil” of me to approach Pruitt at lunch and that it’s a sign of dark times ahead for our political climate. But these arguments are not genuine: The bogus “civility” argument has arisen because conservatives are losing on the content of the arguments.

The truth is that this administration doesn’t want the media to pay attention to protesters who chanted through Homeland Security Secretary Kirstjen Nielsen’s dinner for her leading role in separating children from their families at the border. This administration wants to distract from the fact that the owner of the Red Hen refused service to Sarah Huckabee Sanders because she’s publicly defended both Trump’s desire to bar transgender people from the military and his despicable “zero tolerance” policy that’s ripped apart immigrant families.

Focusing on where, when, or how a concerned citizen speaks up is what a person does when they don’t have an adequate response to the concerns being voiced.

Those other restaurant encounters didn’t run through my head when I saw Pruitt across the room, but I know they played an important role in setting the stage for me to speak up. When I looked at the man who was actively pillaging our planet on behalf of his powerful friends, I knew instantly that it was my right as a tax-paying American to tell him how I felt and my responsibility to be a voice for those who didn’t have the same opportunity.

Since then, I’ve heard from countless people across the country and abroad, cheering on my small action but saying they don’t think they’d have the guts to do the same thing. To them, I say that three weeks ago, I might not have had it in me either. I hope seeing me, a concerned mom and citizen, speak up empowers people the way seeing others taking action empowered me.

After I told Scott Pruitt that he was bad for the environment and that he was taking handouts from energy lobbyists, Pruitt’s office made sure to tell the press that he had said “thank you” to me. What they didn’t say is telling. They didn’t offer any substantive defense of his policies. They’d rather keep the focus on civility than the serious repercussions of their actions on our planet.

I’m not saying everyone should be disrupting politicians in restaurants. But I am saying that putting pressure on our government is vital, and we all need to do our part.

If talking to your public servants in a restaurant isn’t your style (or even if it is), there are so many other ways to make an impact. Join an existing activist group (like Sierra Club, This Is Zero Hour, United We Dream, Black Lives Matter, Indivisible, or the Working Families Party), or support progressive candidates like Alexandria Ocasio-Cortez. Follow them to keep up with relevant protests, other candidates to support or denounce, rallies and press conferences, donation opportunities, and other ways to help. Use Resistbot to contact your representatives just by texting.

Finally and most importantly, the endless pattern of this administration favoring corporate interests over real people won’t end unless we all vote. Donald Trump was elected by only one-fourth of the country. Elections aren’t decided by who cares the most; they’re decided by who is motivated to show up at the polls. So make sure you and your friends are registered to vote. Midterms are this November, and it’s not too early to send out a save the date. We need Congress on our side.

We can’t fight on all fronts all the time, but we all must do what we can, and together, we will make change. As a mom who thought I was just going to sit down for lunch, I can tell you that we do have power; we just have to use it.

Kristin Mink is a mom and a teacher. She will be speaking at the Moms Clean Air Force Play-In this Wednesday on the National Mall. Find her on Twitter at @kristinminkdc and at facebook.com/kristin.mink.

The coronavirus pandemic hasn’t stopped the war in Afghanistan
Betsy Devos is still struggling to explain cuts to Special Olympics funding
Health experts call for the vice presidential debate to be canceled or made virtual
A survey of 30,000 households reveals Covid-19’s economic toll in the developing world
This week in TikTok: How a dance goes viral
MacKenzie Scott, the Amazon billionaire, is giving away $1 billion a month to charity