I did Shop With a Cop as a kid. Now I realize it was police propaganda. 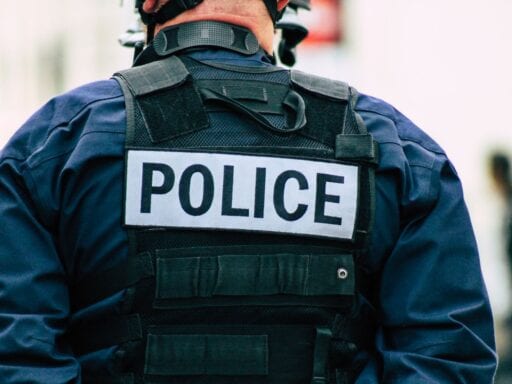 On being a Black child used as pro-cop propaganda.

It’s September, and Jacob Blake was almost murdered. He was shot seven times by a Kenosha, Wisconsin, cop who tried to detain him. Last month, I could have replaced that name with a different Black person’s. I could have done the same the month before.

I scroll through my Twitter timeline and see outrage, but I also see viral videos of cops dancing with protesters, or kneeling, or hugging them just moments before knocking an eye out of its socket. The video I see most is of National Guard officers in combat gear doing the Macarena in Atlanta. My followers mostly retweet to critique, but underneath those retweets, I see replies saying that these moments are special, heartwarming. That these images of cops and protesters holding up their fists side by side are what America needs right now.

Moments like these — where I witness both revolution and the gross but subtle attempts to keep it from looking like one — remind me of my first experience with the police where I unwittingly participated in pro-police propaganda. As I’ve grown and my understanding of my place as a Black woman in this world has sharpened, I look back at this experience with an uncomfortable recognition of how my Blackness was being used.

If I told you I remembered exactly when I stopped trusting the police, I’d be lying. I’m sure the distrust trickled down to me the way secrets and traditions do. I’m sure, like every young Black person does, I just observed or overheard it and realized, eventually, people were right.

Maybe my childhood low-income apartment complex taught me. We were a neighborhood full of parents, siblings, everyone Black. We were a neighborhood that came alive in the summer. We left our bikes in the yard or in the middle of the street or on our neighbor’s porch so he could fix it. We chased down the ice cream truck, chased down coins to buy something, sold lemonade, made no money, tried again the next day.

With all that commotion, police would, of course, drive through the neighborhood frequently. They’d inch down each side of the complex as if they were observing every single one of us, every centimeter of our skin. Some of us would stay where we were, unbothered, waiting for a challenge. But most of my neighbors, because they knew danger would come, scattered.

When I was about 11 or 12 years old, I was selected to participate in Indianapolis’s annual Shop With a Cop program, hosted by the Indianapolis Fraternal Order of Police Lodge #86. I wasn’t old enough to know that Black people got killed by police often. But I was old enough to recognize that in my neighborhood, when you saw cops, you abandoned the outdoors and went back inside. I was also old enough to keep some things to myself — to know not to tell my friends or others in the neighborhood that I’d be on an all-day excursion with a cop.

Shop With a Cop brings together Marion County police officers from 11 departments to take “needy children from all over the Indianapolis community” shopping for the winter holidays. It’s a day-long event, complete with a movie showing, meals, and a trip to Walmart or Meijer to shop for more expensive winter needs — or whatever you may point at and ask for. The PR pitch from a police perspective is that it’s a time to give back and to give low-income children a positive police experience. Last December, the Indianapolis program assisted about 350 families; it boasts the largest Shop With a Cop program in the country, with many other cities having a similar program.

Though the holidays were always hard for us, that winter seemed different. My mom had applied for Christmas help all over the city, and after completing the paperwork and meeting income guidelines, I was chosen. The same winter I participated, a family also sponsored me through another, non-police-related Christmas program — getting as much as they could off my mom’s wish list, which included a few toys and some clothes, since the police department was covering the winter coat and other necessities.

What I remembered about my Shop With a Cop experience was that I went with a white male cop to Walmart and the movie theater afterward. What my mom told me, when I checked more than 15 years later, was that I went with a Black woman cop. My mom said she probably wouldn’t have let me go had it been a white male cop, but the Black woman made her feel comfortable. The cop pulled up, according to my mom, and came into the apartment to chat with both her and my grandmother. I remember being quiet, just waiting to get the day over with.

What I didn’t tell my mom, revisiting this conversation as an adult, was that the police department sending someone who looked like us was by design. I didn’t tell her that all those years later, learning it was a Black cop instead of a white cop didn’t soothe me. I had learned too much about my Blackness and our history, and had protested for too many Black people who had been wrongfully killed by police to be comforted. I didn’t mention that the sole purpose of sending a Black cop to our Black neighborhood was to ease us into comfort. That it was all for aesthetics — if we see a seemingly nice Black cop, we believe, even if we’ve experienced differently, that there is some good in a system that was created with the intent to harm us.

I decided not to bring it back up to my mom because I’m sure she already knows all of this, even if she doesn’t have the words for it.

Early teens, the beginning of high school maybe. My best friends and I attended the Indiana Black Expo Summer Celebration — an annual, almost two-week event of exhibits, performances, and activities — in downtown Indianapolis that we saved our small allowances over for months. We didn’t have money for the actual events planned by the organization, only enough to give our parents gas money, buy some food while we walked around, and possibly buy an item from one of the exhibits in the convention center.

It was a Saturday evening. The sun set, the downtown sidewalks got more packed, and we stood in front of a Steak ’n Shake trying to decide what to do next. The officers rode on horses, galloping down the road, towering over every Black kid in Indianapolis who could find a ride or was old enough to catch public transit.

I guess we stood for too long. I guess the officer who approached us didn’t like my friend’s tone. I guess he thought she was old enough, Black enough to slam into the restaurant’s wall, her cheek bunching up and mouth still open. I guess he thought one less of us was better.

He packed her into a paddy wagon along with plenty of other Black teens. I don’t know if we yelled or told the officer to stop. What I know is we were powerless. What I know is my first personal experience with the police was shopping, and that was physically harmless. What I know is when you’re Black, you never know when it’ll be your time, at what age they’ll stop performing kindness and start performing hate.

After the introductions at my apartment, the cop and I got into the car to start our shopping excursion. As we drove, she turned on the sirens like she was supposed to. What might have been exciting for other children wasn’t exciting for me, but triggering to the sounds I often heard in my neighborhood and the fear that arose when they did. I sank down in my seat until we got to the store.

Throughout the experience, I don’t remember saying much. I remember being excited that I could get a coat. I remember not loving the movie we saw. But what I remember vividly is the nagging feeling I had, the urge to keep looking around the store and the mostly empty, dark theater to see if anyone was watching me. If any white people assumed I was some no-good Black kid, since I was sitting with a cop and many Black kids my age had already had run-ins with the justice system. If any Black people around me worried that I was in danger for the same reason.

That whole day, I couldn’t shake the feeling that everything — getting into the police car in my neighborhood, being seen at the Walmart — could expose me to ridicule from my neighbors and friends. I was maybe too young to fully understand why they would tease me, but my neighbors knew something I didn’t: the police may act like they want to support low-income, Black communities, but everything I was participating in was for show.

The experience was supposed to be a positive one, but, in the end, nothing about Shop With a Cop made me any less wary of police. Even back then, I understood it was transactional: I was there for the items I needed but couldn’t afford. I knew deep down that cops had opinions about me, or my neighborhood, or my family, even if I couldn’t articulate it.

As far as I know, I never saw the Black woman cop again. White officers were the only ones I saw in the neighborhood from then on.

When the protests in response to George Floyd’s murder began, my Twitter timeline was full of Black people tweeting about their first negative encounter with cops. They were 11 years old, or 13, 14, 16. Older if they were lucky. But most of them weren’t lucky. Most of them had already been slammed onto the sidewalk by police officers at a young age, for being, for existing. Most of them figured out quickly what streets to avoid, what neighborhoods didn’t want them around, what stores they’d get followed in. Sometimes, if we time it right, we can avoid the cops. We can live and they’ll let us. Unless we jut outside of invisible lines, boundaries unknown to anyone but them.

Programs like Shop With a Cop are masterful propaganda. Just like the “good cop” images floating around the internet and on the news, they serve to make cops look good. Officers can point at these programs when challenged about what they’re doing for low-income, Black communities, or when they kill a Black person. For some Black people, I imagine, these programs keep them conflicted about whether or not all cops are “bad,” even though a system designed to destroy us can be nothing but. And I guess that’s the point.

But for me, the few programs offered to “needy children” via the Indianapolis police weren’t enough to prepare me, or make me accept, the state violence inflicted on Black people. When you have no choice but to accept assistance from institutions and systems that will inflict harm on you and people who look like you, you realize how much state violence resembles an abusive partner. They perform affection and support, then harm you. Then do it again and harm you, just to make sure you need them enough.

Arriel Vinson is a Tin House Winter Workshop alumna and Hoosier who writes about being young, Black, and in search of freedom. Her poetry, fiction, and essays have appeared or are forthcoming in Kweli Journal, Catapult, Waxwing, Electric Literature, and others.