“I have no idea”: Pelosi shuts down Senate Republicans’ impeachment timeline 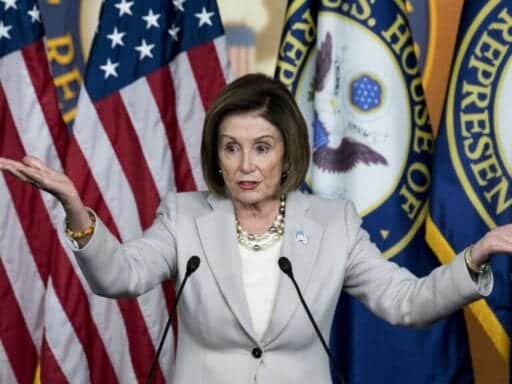 Mitch McConnell has floated the idea of holding a Senate impeachment trial after Thanksgiving.

Senate Republicans believe an impeachment trial in their chamber will wrap up by the end of the year, but House Speaker Nancy Pelosi is not making any promises on her end.

“I have no idea,” Pelosi flatly told reporters at her weekly press conference Thursday. “The timeline will depend on the truth-line, and that’s what we’re looking for.”

As the House’s impeachment inquiry into President Donald Trump ramps up despite protests from the White House, some rank-and-file Democrats are wondering how many more facts the committees need to gather before they are ready to launch articles of impeachment. And some are also eyeing an end-of-year timeline, at least for their part in the House.

“That would be my hope,” Pelosi’s No. 2 deputy, House Majority Leader Steny Hoyer, told reporters on Wednesday when asked if he sees the inquiry being wrapped up before the new year.

“Sooner rather than later. I hope no longer than months, and not a lot of months,” Hoyer said, adding, “I want to emphasize, this is no rush to judgment.”

In the last few weeks, Democrats have seen a deluge of new information and witnesses come forward to testify in front of the three House committees heading up the impeachment inquiry. As Hoyer pointed out, Democrats are walking a tightrope on impeachment, trying to balance calls from many to act quickly in the interest of national security without making it seem they are stampeding toward a decision.

But Democrats are also facing an uncomfortable reality; they’re coming up on the holidays and have a shrinking number of days in their calendar before 2020 — a presidential election year. They are hesitant to put an exact date on the end of their inquiry or when they might start to move on articles of impeachment, if they get to that point.

“None of us came to Congress to impeach a president,” Pelosi said Thursday. “That’s not what we come here to do, and any such actions are to be taken very solemnly and seriously — and in my view, prayerfully.”

Despite pushback from the White House, the House is making progress on their inquiry

A lot has happened in the five weeks since a whistleblower complaint was released alleging Trump withheld US military aid from Ukraine in exchange for dirt on political rival former Vice President Joe Biden.

Just this week, we saw current and former White House officials seemingly admitting to a quid pro quo and heard multiple officials express concern about the involvement of Trump’s personal lawyer Rudy Giuliani in official state business. On Thursday, US Ambassador to the European Union Gordon Sondland outlined a clear “quid pro quo” — a public Ukrainian commitment to investigate corruption in exchange for a coveted White House audience — and pointed the finger at Rudy Giuliani.

And later the same day, acting White House Chief of Staff Mick Mulvaney explicitly said aid to Ukraine was held up on three counts, including Ukraine agreeing to investigate any participation in the 2016 presidential election.

“I was involved in the process by which the money was held up temporarily,” Mulvaney told reporters at the White House. “Three issues for that: the corruption in the country, whether or not other countries were participating in support of the Ukraine, and whether or not they were cooperating in an ongoing investigation with our Department of Justice. That’s completely legitimate.”

Some Democrats are asking when is enough information enough to make a final decision on impeachment.

Other Democrats have pushed a timeline that would have lawmakers draft articles of impeachment by Thanksgiving and sending them to the full House by December for an end-of-year vote. For now, though, Democrats are holding the line. The official stance coming from leadership and the committees of jurisdiction on the impeachment inquiry is they are still in fact-finding mode.

“We’re just not there yet,” Rep. Jamie Raskin (D-MD), a member of the House Oversight Committee, told reporters on Wednesday. “We really are still in the throes of the fact investigation.”

Every week it seems as though there’s a deluge of new revelations about Trump and Giuliani’s dealings in Ukraine. Despite the White House’s attempts to block officials from testifying, multiple former State Department, Department of Defense, and National Security officials have appeared in front of Congressional committees for closed-door depositions; the details coming out of those hearings don’t look good for the White House.

But the sheer amount of information coming out now doesn’t necessarily mean that Democrats’ investigation comes to a conclusion more quickly; it also contains the potential to drag things out if they need to dedicate more time to investigate.

“It could go either way,” Connolly said. “If it’s explosive testimony that further illuminates what’s in front of us … well then, that speeds it up. If, on the other hand, it takes us in a whole different direction, that has to be explored and that would slow it down.” But Connolly added the emerging pattern is corroborating what the committees already know.

In a “Dear Colleague” letter this week, House Intelligence Committee Chair Adam Schiff informed Democrats the investigative committees could move to public hearings and eventually make transcripts of their interviews public. Schiff said nothing about the exact timeline but added continued White House defiance of the House probe will be considered as obstruction.

Democrats also suffered a personal blow this week; House Oversight Committee Chair Elijah Cummings of Maryland died on Thursday morning at age 68 after ongoing health problems. Cummings had been one of the key figures presiding over the impeachment probe, issuing subpoenas to the White House as recently as early October.

“He worked until his last breath because he believed our democracy was the highest and best expression of our collective humanity, and that our nation’s diversity was our promise, not our problem,” Cummings’s widow Maya Rockeymoore Cummings said in a statement.

The Senate is anticipating a potential year-end impeachment trial

The Senate, meanwhile, is making plans for a year-end impeachment trial with the goal of wrapping things up ahead of the 2020 primaries, according to reports from Politico and the Washington Post.

McConnell laid out the schedule in a weekly Tuesday luncheon with lawmakers, per Politico, noting that he expected the House to move on articles of impeachment by Thanksgiving. Once the House approves the articles against the president, the Senate would then hold a trial. At the end of the trial — which McConnell’s caucus reportedly wants to conduct quickly — senators vote to acquit or convict the president.

McConnell’s message to his conference this week suggested that the trial could conclude as soon as this winter.

“There’s sort of a planned expectation that it would be sometime around Thanksgiving, so you’d have basically Thanksgiving to Christmas — which would be wonderful because there’s no deadline in the world like the next break to motivate senators,” Sen. Kevin Cramer (R-ND) told the Post.

As the Post’s reporting indicates, however, McConnell also stressed that Chief Justice John Roberts would be presiding over an impeachment trial, meaning that he’d have more discretion over how long it could potentially run. There’s also a possibility that lawmakers could attempt to dismiss the trial quickly once it heads over to the Senate, and that’s a question Republicans raised in the luncheon as well, according to Politico.

Sen. Susan Collins (R-ME), a lawmaker who was present during President Bill Clinton’s impeachment, reportedly cautioned Republicans about expressing an opinion on the inquiry, since they’ll serve as jurors.

Senate Republicans are among the most closely watched lawmakers in Congress as the inquiry continues. In order to convict Trump of the charges he potentially faces, at least 20 Republicans would have to break with the president to reach the 67-member supermajority that’s needed. At this point, that’s not expected to happen.

Greg Gianforte flips Montana governorship to Republicans
The US is worried about Iran retaliating with a cyberattack
What tennis pros look at when they choose a ball
It’s easy to sneak onto your partner’s phone. Don’t.
Michael Che and Colin Jost open the 2018 Emmys to lukewarm laughs
3 winners and 4 losers from the Nevada Democratic debate