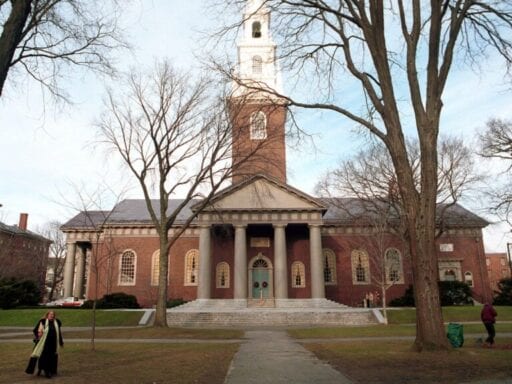 Why the Harvard lawsuit is painful for many Asian Americans like me.

Positive personality, likability, courage, kindness, and being “widely respected” — these were all traits that Asian-American applicants to Harvard University consistently rated low on compared to their peers. This is according to an analysis of more than 160,000 student records released alongside a lawsuit filed by a group of Asian-Americans students rejected by Harvard. The suit claims that the university’s admissions process uses an illegal racial quota system stacked against Asian Americans, allegations that Harvard denies.

As an Asian American, this look inside the Harvard admission system has been painful to witness.

On the one hand, the lawsuit feels like it has an ulterior agenda. Ed Blum, the man who helped engineer the lawsuit and a related case involving admission “discrimination” against white people at the University of Michigan, is no friend of diversity and inclusion. He previously brought cases that successfully gutted key provisions of the Voting Rights Act, and the Harvard case is a very thinly veiled attempt to pit ethnic groups against each other, ignoring the fact that there are still significant racial disparities in American society.

Like the bulk of Asian Americans I know, I believe that affirmative action — which allows race to be considered as one of the factors in deciding whom to admit — is necessary to help break down barriers and ensure equal opportunities in higher education. It’s especially important at elite schools like Harvard, where the median family income of students is an astonishing $168,000 a year and more than 15 percent of students came from families with an annual income of $630,000 or more. Affirmative action helps make sure that Harvard students aren’t just golden-haired Georgetown Prep students or the likes of Jared Kushner, whose father reportedly donated $2.5 million to the school to help win admission for his less than academically stellar son.

And, of course, affirmative doesn’t just benefit its recipients. It benefits all students, by exposing them to viewpoints, life stories, and perspectives they might not otherwise encounter — all good things for schools that function as the training ground for the future leaders of an increasingly diverse society.

Knowing all this makes me want to fight this lawsuit. But, to be honest, the evidence it’s unveiled nonetheless makes me feel uneasy. It’s angering to witness the dismissive, sweeping way that admissions officers discuss Asian-American applicants. The writing-off of these students as nondistinctive, interchangeable kids smacks of racist stereotypes often used against Asians in this country.

A Department of Education investigator charged with looking into claims of discrimination surrounding the lawsuit reportedly said that admission officers at elite schools often used stereotypical terms about Asian-American applicants: “Oh, typical Asian student. Wants to be a doctor. Nothing special here.” For many Asian Americans, these revelations are fueling questions about belonging — about our place in America, about political power — that we’ve long wanted to avoid.

As the Harvard case percolated through the courts this summer, I spoke to a number of Asian-American adults, including some who are on the faculties of elite universities. These conversations took place in hushed tones — one person literally looked over his shoulder to make sure no one could hear. Invariably, people thought affirmative action was essential. Just as invariably, people thought maybe, just maybe, Harvard and other elite schools are long overdue for a hard look in the mirror.

The people I spoke with were angered for the Asian-American students most hurt by these admissions standards — the children of working-class Asian immigrants who don’t have the connections and guides to lead them through an admissions process that still favors the sort of skills that upper-middle-class and upper-class kids pick up almost by second nature. In fact, much of the anger was that legacy kids — who make up nearly 30 percent of Harvard’s class of 2021 — benefited much more from the current system at the expense of working-class Asian students than affirmative action admits. In other words: Hey, Ed Blum, you’re targeting the wrong folks.

But there was also a sense of emotional rawness. Asians in America have long been stereotyped as undistinguishable robotic automatons. In my immigrant father’s generation, many of his cohorts have stories of being denied promotions because they didn’t have “leadership skills,” which was really just code for “doesn’t play golf” and “isn’t one of the boys.” In short, “leadership” as defined by the values and outlook of the majority culture.

The lawsuit highlights Asian-American discomfort with our place in society

There was a sense among the Asian Americans I spoke with that if similar disparaging comments had been made about Jewish or African-American applicants — “another gifted student-athlete, nothing special here” — there would likely be a level of outrage that we’re not seeing from progressive writers, pundits, and friends for this case.

It didn’t help that around the same time as the Harvard lawsuit, New York City Mayor Bill de Blasio was announcing big changes to admissions policies at the city’s elite public high schools. Although working-class Asians would bear the brunt of changes, no one at the mayor’s office apparently thought it necessary or worth the time to consult with Asian parents and community leaders ahead of time. It seems Asians aren’t people that even the unabashedly progressive mayor of a progressive city feels he has to take seriously.

And that, in some ways, gets at the core of the unease.

For many Asian Americans of my generation, this year has been a powerful reminder of our awkward, tenuous position in American society. Many of us are assimilated enough, and accepted enough, that we often forget we are different. We are successful; we live and work among other successful people of different races who we think see us as the full and complex individuals we are.

Then comes the wake-up call. That’s not how they see us. Not for the admission officers applying tired and deeply hurtful ethnic tropes. Not for New York political leaders. Not for fellow progressives who can’t seem to say that they support affirmative action, but that Harvard also messed up.

Michael Li is senior counsel at the Brennan Center for Justice at NYU School of Law. The views expressed in this piece are his own.

Ford will testify on Kavanaugh sexual assault allegations in front of Senate on Thursday
Adam Schiff just explained what’s next in the impeachment inquiry
Read: the whistleblower complaint about Trump and Ukraine
Joe Biden explains why he’d defy a subpoena to testify in the Senate impeachment trial
Bill de Blasio wants to make public campaign financing a reality nationwide
Joe Biden wins the Alabama primary, picking up another Southern victory