I think HBO’s Watchmen is tremendous television. Lots of people will strongly disagree. 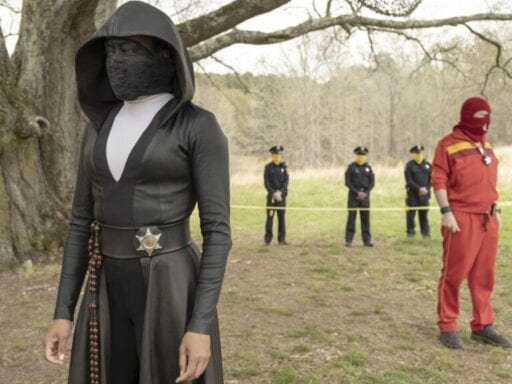 Damon Lindelof — of Lost and The Leftovers fame — shifts perspectives on the acclaimed comic.

The opening 10 minutes of HBO’s new Watchmen series — not a straight adaptation of the acclaimed 1986 graphic novel but a companion to it — are a statement of purpose rarely seen on TV: “Here is what this show is,” they say. “If you’d rather not watch this kind of show, we wanted to let you know up front.”

Watchmen is set in 2019, but these opening 10 minutes depict the Tulsa, Oklahoma, race massacre of 1921. The massacre was pure malevolent violence committed on Tulsa’s “Black Wall Street,” undertaken by white citizens who killed dozens and wounded even more (exact totals are unknown) while burning black property to the ground. It is widely considered one of the most shocking acts of racial violence in American history, and it’s core to what Watchmen is saying about America today.

Then again, also core to Watchmen is the idea of Bass Reeves, a black marshal from Oklahoma whose exploits are celebrated in a silent film that plays in a Tulsa movie theater during the series’ opening moments. The intersection of race and power — and more specifically, how that power is so often handed to white people, while black people are only allowed it if they uphold the white status quo — weighs heavily on Watchmen’s mind from the first.

If you watch these first 10 minutes (hell, if you just read my description of them), you might be tempted to wonder why a moment so thoroughly steeped in all of the country’s worst selves is leading into what is, at least nominally, a superhero show. You might wonder whether this sequence is being used to infuse Watchmen with false gravitas.

You might also wonder, if you’re aware of who’s on the show’s creative team, whether a group that boasts lots of black voices but is headed up by a white showrunner (Damon Lindelof) and white director (Nicole Kassell) is the right one to tell this particular story, and whether the genre they’re using to tell it is the best one. You might wonder why the first episode, at least, seems to take a cavalier approach to real-world stories about white supremacists’ relationship with police forces in the US.

But even if you hold these concerns, I would say you should keep watching. Watchmen is a big and bold series, unlike any other TV show I’ve ever seen, and just when you think it’s shown you all of its many faces, it reveals another one. It makes missteps here and there, but at its heart, it remains a story about examining the fraught state of the world today through the lens of superhero tropes, just as the original comic did.

Then again, I would say that. I’m extremely white, and to watch a show like this, on some level, is low-risk for me. I think Watchmen handles its racial elements well, but you might disagree. And if you do, the show wants to make sure you know exactly what it’s doing from the first.

So why do I think it works? It’s all a matter of perspective.

Watchmen is the first TV project from Lost co-creator Lindelof since the end of his three-season series The Leftovers, which he co-created with Tom Perrotta and which ran from 2014 to 2017. The Leftovers’ viewership was low, but the show’s mixture of bold storytelling choices and existential despair won it a fervid cult audience. And in many ways, Watchmen seems like an attempt to blend the existentially weighty themes of The Leftovers with the poppier tones of Lost. For the most part, it succeeds.

(Here I should note that Lindelof and I are friendly, to the degree where if we run into each other in public, we’ll usually talk for several minutes. Take my praise with as many grains of salt as you need.)

Beyond thematic similarities, there’s one big reason Lindelof is an inspired choice to adapt Watchmen: His career is all about examining how point-of-view changes a story.

Lost famously centered on one character in every episode, whose flashbacks would inform the on-Island action. And The Leftovers took this approach even further, with occasional episodes that never left a particular point-of-view, so you were glued to one character’s hip. Even in episodes that were framed around more than one character’s point-of-view, The Leftovers rarely exceeded three or four perspectives. The implication of Lindelof’s work is clear: A story changes based on who’s telling it.

That’s also the implication of Alan Moore and Dave Gibbons’s original Watchmen comic. (Moore, who hates adaptations of his work, declined to have his name associated with the new TV show.) The 12-issue story featured entire installments that were just about a single character’s journey, including one memorable issue about the life and transcendence of the godlike Dr. Manhattan and another about the horrible childhood of the fascistic Rorschach.

Moore and Gibbons’s Watchmen was so groundbreaking that it also shifted the point-of-view in superhero stories in general. What happens if you tell a story typically associated with escapism and brave heroes doing brave things, but through the eyes of a bunch of psychologically damaged people who beat up criminals because that’s the only way they can feel anything at all? What happens if you tell traditional stories about power, but in a way that emphasizes how little power any of the characters actually have in the face of looming nuclear apocalypse?

Lindelof and his team have taken a similar tack for their TV Watchmen. Three of the first six episodes are situated almost entirely in a single character’s viewpoint, with one doing so in a fashion unlike anything I’ve quite seen before. A fourth tells a more Lost-ian story, via flashbacks into one character’s past. Each episode also cuts to what I can only describe as a Looney Tunes short starring Jeremy Irons as the lord of a country manor and featuring plenty of macabre comic violence. It’s awesome.

Watchmen is pointedly set in Tulsa, home of the 1921 massacre, and returns to that dark event again and again, making it a touchstone for a country that fancies itself better than it was in those days but in truth has barely progressed. Its central character, Angela (Regina King), is a black woman detective who dresses up in a mask and costume when she’s working. (In the Watchmen universe, it’s the police who have secret identities, the implications of which the show begins digging into in earnest almost immediately.) She has to deal with occasional rain showers of squid (a detail from the comic that fans will appreciate). And in a reflection of Moore and Gibbons’s Watchmen, she is unexpectedly drawn into a mystery that connects to a massive conspiracy she can barely comprehend.

That’s almost all I want to say. Part of the joy of Watchmen is in seeing how it borrows elements from the comic to completely invent its own story. But if you’ve never read the comic or seen its 2009 movie adaptation, you’re going to be just fine. There’s both weirdness aplenty and a serious meditation on what it means to live in a world where systems have run amok and the authorities pretend that encroaching fascism, rising white nationalism, and approaching environmental collapse are just the way things are supposed to be.

And it’s all filtered through a collection of superhero tropes and motifs, which Watchmen uses to tell stories about the world we live in today and how unjust it is. The events that ended the comic — in which one character saves the world through a horrible, horrible plan — have endured in the new TV series as a legacy of horror. The world was saved, but it’s also still the world. Nothing got any better. People just had a very real puppetmaster to point to when they insisted their strings were being pulled.

Lindelof has talked at press conferences about how he wanted to match the world of his show to the biggest real-world problems of today, which he sees as the rise of white nationalism and fascism. But the story he’s telling is also directly tied and indebted to the world of the comic. By definition, it can only comment on our world via a funhouse mirror. The result is a kind of uncanny valley version of our reality — just false enough to clang, especially if you know a lot about these issues.

Watchmen’s stabs at political relevance may strike some as clumsy. Throughout the show’s first six episodes, I found those stabs frequently moving, usually graceful, and always interesting. But a sociopolitical reality that hits me as the core of a gut-wrenching drama can feel appropriative to anybody who sees their own trauma and pain being depicted on screen. There might have been other ways to revisit Watchmen, or at least other voices to tell this particular story. (With that said, though Lindelof is the showrunner, his writers and directors include many black voices, including the great TV director — and Lost veteran — Stephen Williams.)

The level of comfort that individual viewers feel with how Watchmen approaches and appropriates these topics will differ; I’m well aware that my relatively high level of comfort almost certainly stems from the fact that I will leave my office tonight and walk out into the world with white skin.

But I found a thrilling freedom in the show’s embrace of its own uncanniness, at least once I settled into it. The world of the TV Watchmen is just as cruel as our reality, but in different ways. And it is interested in the same things as we are: The characters fight and bleed and die, and at the end of the day, the only person we absolutely know we can trust is Angela — and she’s not sure what to think. Those are the makings of both a great alternate history tale and a great mystery.

And particularly from its third episode on, Watchmen is frequently great. It skillfully weds spectacle to intimacy, and it tells a story about what happens when you talk to God about your pain and realize he’d rather talk about anything else. Calling it the best new show of the fall feels too limiting, because it’s trying to be so many things to so many people. It left me dizzy from its audacity, its delight, and its occasional lack of taste. Your mileage may vary.

We aren’t using all of our tools to treat Covid-19
The Dark Crystal prequel’s genocidal puppets are terrifyingly effective
Billie Eilish, the neo-goth, chart-topping 17-year-old pop star, explained
How biohackers are trying to upgrade their brains, their bodies — and human nature
The romaine lettuce E. coli outbreak is finally over
San Francisco shuts down: Tuesday’s coronavirus news