“I tried ketamine to treat my depression. Within a day, I felt relief.” 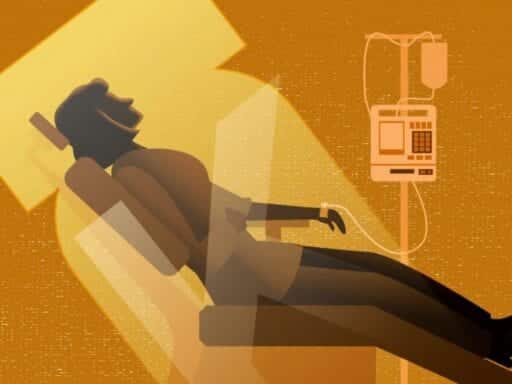 How the veterinary anesthetic and recreational drug saved me from suicidal thoughts.

I am going to die in this dentist’s chair.

My eyes are closed, but I can still see skulls outlined with white against a black background. I have an epiphany: God is death. I’m in the midst of a real-life version of the hallucinogenic ride in Willy Wonka and the Chocolate Factory, all in my own mind.

A monitor emits a steady beep, and for a second, I think I’m flatlining. But no: I’ve just completed my first infusion of ketamine, a veterinary anesthetic (often used on cats and horses) sometimes used illegally as a club drug called Special K.

I am here because I cannot stop thinking about suicide. I’ve been in therapy on and off for more than 30 years, since I was 5, and on depression medication for more than a decade. Nothing seemed to work. I couldn’t stop imagining killing myself in increasingly vivid daydreams.

As a journalist who covers health and medicine, I had read about the success of experimental trials that used ketamine to treat depression. My therapists had recommended extreme treatments like electroshock therapy, a procedure that frightened me due to reports of memory loss from those who had undergone it, but had never mentioned this. But I was getting desperate for a serious intervention.

After some research, I concluded that ketamine was not only more affordable but just as effective as sending electrical pulses through my brain. (About 70 to 85 percent of patients with severe depression who try ketamine treatment say it’s effective, compared with 58 to 70 percent of ECT patients.) I told my doctor I wanted to try it.

It wasn’t my goal to be on the vanguard, just to get better, but I am an early adopter of a treatment that could one day help millions of people with chronic depression. After a full treatment cycle, my suicidal thoughts went away. And depression isn’t the only psychiatric illness the drug may combat. Studies are being conducted on ketamine’s efficacy on anxiety, bipolar disorder, post-traumatic stress disorder, and even obsessive-compulsive disorder.

That’s how I wound up glued to that dentist-style chair at a clinic in Houston envisioning skulls, as an IV drip steadily infused me with a drug I’d thought was reserved for rave-goers.

An anesthetic that triggers happiness

Most people familiar with ketamine know it as either a veterinary medicine or an illegal street drug. But it’s been approved by the Food and Drug Administration for anesthetic use for humans since 1970. Its rise as a treatment for depression, a legal but off-label usage not yet approved by the FDA, is even more recent.

Ketamine’s antidepressant effects were revealed in a Yale study in 2000. Over the next decade, researchers continued to explore its potential as a treatment for major depressive disorder. Asim Shah, a professor and executive vice chair at Baylor College of Medicine who co-led several of these studies, told me that doctors have long been curious about the euphoric effects of ketamine. A lot of people given ketamine as an anesthetic “would start smiling or laughing,” he says. “That’s the reason that many people before have said, ‘Oh, maybe it can be used for depression.’”

As of now, selective serotonin reuptake inhibitors (SSRIs) like Prozac and multiple-receptor antidepressants such as trazodone are among the most commonly prescribed drugs to treat depression. Yet studies show that only around 37 percent of people who use these drugs experience full remission. The number drops past the first year of use.

Ketamine is an NMDA (N-methyl-D-aspartate) receptor antagonist, which means that it targets glutamate absorption in the nerve cells, unlike traditional antidepressants, which raise serotonin levels by blocking the reabsorption of the neurotransmitter. Glutamate is associated with excitability — among many other brain functions such as memory. Researchers like Shah believe that as the brain metabolizes the ketamine, new neural pathways are created that help restore function obliterated by depression. It’s this effect, not the experience of hallucinations or dissociation, that can help treat depression.

Despite its association with the platform sneakers and vinyl pants of the 1990s club scene, ketamine abuse began in the ’80s. People who take ketamine recreationally do so for its fast-acting high, which is typically a floating or out-of-body experience coupled with euphoria. But it’s not the kind of party drug that will bump up your social skills. After all, it is an anesthetic: Users retreat into their minds and experience hallucinations, sometimes reporting religious experiences or even a feeling some compare to rebirth. Drawbacks of recreational use of the drug include risk of overdose, dependence, and high blood pressure.

But for someone experiencing intense depression, that “rebirthing” can be therapeutic.

What people who have never battled depression don’t understand is that it has little to do with “feeling sad.” Sadness is a flesh wound, a knife cut that might sting but eventually heals. Chronic depression is blunt force trauma to the head, locking you into a pattern of negative thought and throwing away the key.

On my quest to find a fix for my depression, I was shuffled from practitioner to practitioner like a poorly behaved foster kid. By the beginning of 2018, my psychiatrist said I had tried (and failed) nearly every class of drug aimed at treating depression. I was fresh out of options and desperate enough to try something more experimental.

When I decided I wanted to try ketamine, I went to the Menninger Clinic in Houston, a respected psychiatric clinic I had written about, to figure out next steps. I was an obvious candidate, as I had been on antidepressants for more than a decade and had shown little improvement; I just needed to be approved for the treatment after a consultation.

I met with Justin Coffey, the medical director of Menninger’s Center for Brain Stimulation Services, to discuss my history and we reached an agreement: I’d try two infusions of the drug, and if it had a positive effect, I’d do four more. At Menninger, this cost $600 for each session, and it’s not covered by insurance. If not, electroshock therapy would be my next step.

I arrived and got a basic work-up in the pre-treatment room. In addition to weighing me and taking my blood pressure, a nurse tested my reading ability, memory, and basic awareness (the date, where I was). Dr. Coffey came in to discuss what to expect over the course of my six treatments. That number is typical for this treatment, but because it’s still experimental, so is the number of doses necessary to work. Coffey was open to the idea of me needing more if six didn’t provide lasting results.

His frightening warning: Since ketamine is a dissociative anesthetic, I might feel like I’m leaving my body and experience a “bad trip,” as opposed to a more euphoric hallucinatory state. But if I were to go into this state, I could tell my nurse, who would stop the infusion or add a counteractive drug, the anesthetic midazolam, to lessen that effect.

The nurse inserted an IV and flushed it with saline to make sure it was flowing correctly; then we moved into the treatment room with its dentist-style chair for my infusion to begin. I would receive half a milligram of the drug for every kilogram of my weight, a very low dose compared to what recreational users inhale or inject. About 10 minutes into the treatment, the tree I was watching through the window separated into two. Soon, it was difficult to keep my eyelids open at all.

And then I was gone, down the rabbit hole of hallucination. My mind skipped through grid-style maps of city parks. I occasionally took a deep breath or wiggled my fingers just to remind myself I still could. I later learned that what I was experiencing is known as a “K-hole,” which is rare at the low dose I took.

Hope for the future at last

Each infusion lasted 45 minutes. After my first one, I had a nurse play the cast album of my favorite musical as the drip began. Instead of running wild, my mind became immersed in the music, albeit in a deeply dreamlike state. Each time, it took about 15 to 20 minutes after the effects of the treatment wore off for me to be able to open my eyes and start walking. Afterward, I was exhausted. The half-hour Uber ride home felt like hours as I longed for the warm embrace of a nap.

Immediately after each treatment, I felt down. But by the time I woke up the next day, I was in less psychic pain and had more purpose. I would start the day on my long-neglected spin bike, feeling motivation that I’d lacked for months. Lunches with friends no longer felt like they existed just to show them I was still alive and making an effort to get out of the house. I was beginning to connect with the world outside my head again. I noticed myself smiling more. According to Shah, feeling the effects of ketamine within 24 hours of treatment is typical. “It is the most rapid-acting treatment for depression,” he said.

After the final infusion, I had the initiative to start writing again. The following week quickly filled up with activities, both work and fun. I was living for the first time in months. It’s been three months since my last treatment, and I’ve even started to feel excited about my future. Shah says I am unlikely to need another dose — I was in the roughly 70 percent who achieve remission after one series of ketamine infusions.

In technical terms, as I’ve said, taking ketamine had caused my brain to release glutamate, the neurotransmitter responsible for “excitatory” responses. But despite all his years of research into the drug’s chemistry, Shah admits, “No one knows the exact mechanism of any medicine.”

If I do need additional doses of ketamine, it probably won’t be an infusion. Thanks in part to Shah’s work, an intranasal version of the drug is expected to receive FDA approval as soon as next year. The side effects of the nasal inhaler, known as esketamine, are practically nonexistent next to the K-hole I experienced; patients would even be able to take the treatment at home. I’m a testament that it can work. And soon, ketamine will be accessible to people (who can afford it, since it likely will be expensive and not necessarily covered by insurance) who have all but given up on fixing their depression.

I had come to believe that my depression was a terminal illness. But the so-called party drug may have saved my life.

Alice Levitt is a writer and editor specializing in food and medicine. She is lucky to live in Houston, Texas, home of the world’s largest medical center.