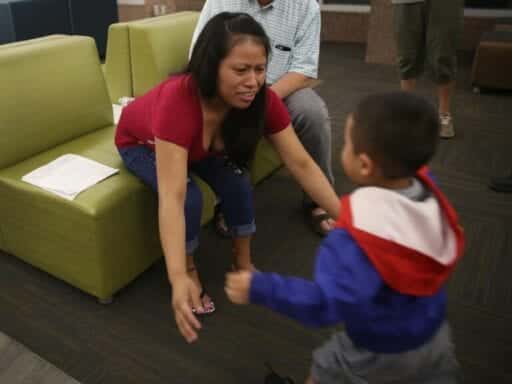 A new filing in the ACLU’s family separation lawsuit recounts claims that ICE is trying to coerce newly reunited families.

A lawyer claims that several fathers have been separated from their children by Immigration and Customs Enforcement for a second time, after the fathers refused to withdraw their children’s cases to stay in the US and allow the government to deport the family together.

The fathers say that shortly after being reunited with their teenage children, they were presented with forms that gave them three “options” for their families’ cases — with the option for deporting the child along with the parent already selected. One parent says the check mark had been made in pen; two others report that they were told they had to sign the form with that option selected.

The allegation comes in a filing late Saturday night in the court case overseeing the federal government’s efforts to reunite families it separated at the US/Mexico border.

The Trump administration has said parents who have exhausted their own options to seek asylum have a choice: They can choose to have their children deported with them, withdrawing the child’s own immigration case, or they can choose to be deported alone while the child stays.

In a comment to Vox regarding the allegations, a Department of Homeland Security official reiterated this. “Asking parents in ICE custody, who are subject to a final order of removal, to make a decision about being removed with or without their children, is part of long-standing policy,” the official said. “ICE does not interfere in the parent’s decision to allow the child to remain in the U.S. to pursue his or her own legal claim.”

But Saturday night’s filing offers evidence of ICE agents doing just that. Either all four parents who spoke to the lawyer are lying, or the lawyer’s declaration shows that the choice isn’t always being freely offered — and that parents who select the second option are having their children summarily taken from them, with no chance to say goodbye, for the second time in a matter of months.

ICE reportedly preselected one option on forms, and yelled at and threatened parents who wanted to select the other one

The testimony filed Saturday night comes from a pro-bono lawyer who has been working with separated families in El Paso. She spoke to four fathers who were briefly reunited with their sons — all 16- or 17-year-olds — in a facility in El Paso on July 25 (the day before the deadline to reunify all separated families), and placed on a bus with them that was then turned around and returned to the processing site.

All four claim that the first option — parent and child alike getting deported — had already been selected for them.

According to the testimony, parents who attempted to cross that out and choose the second option — being deported while allowing their children to pursue their case and stay in the US — were yelled at by the ICE agents or told they simply were not allowed to select another option. One was told that if he opted to be deported alone, his son would still get deported — and might be deported first.

When, ultimately, the four fathers whose accounts are represented in the testimony succeeded in selecting the option of getting deported on their own, they were prevented from saying goodbye to their children. Instead, their children were forced to wave to them from inside the bus they were still sitting on. One father testified:

He then asked if he could at least go back to the bus to retrieve his belongings from the storage area underneath the bus, and was told he could do so quickly. He said that when he went to the bus to do so, his son attempted to come outside the bus to see him, but was unable to do so.

Another father told the lawyer that “being separated from his son the first time was hard, but being separated again after seeing his child for only (a) few hours, thinking they were going to be together, was harder.”

Hundreds of parents could be deported in the next few days. This account raises the possibility that they’ve been coerced into taking their children with them.

When the Trump administration separated families at the US/Mexico border (a practice they engaged in widely before a June 20 executive order, and that they were barred from using in most cases by a ruling in this lawsuit on June 26), the children were reclassified as “unaccompanied alien children” as if they had arrived in the US without guardians.

That reclassification gave them more options for seeking legal status and a better chance of being allowed to remain in the US. Parents of as many as 1,000 children (of the 2,551 kids ages 5-17 separated under the policy) have already lost their asylum cases permanently, with the government claiming they have already exhausted their options for legal review. But their children’s cases are still alive.

Lawyers for the Trump administration have argued that simply bringing a child to the US shouldn’t allow an adult to stay once the adult’s case has been completed. The ACLU and the federal judge in the reunification case (as well as a federal judge overseeing a court settlement about families in immigration detention) have agreed.

The understanding, up until this point, has been that parents should be given the options presented on the form: be deported alone and accept indefinite separation, or be deported together and withdraw the child’s claim for legal status.

The ACLU has expressed concerns all week that in the chaos of family reunification, parents may not have realized what they agreed to, and that they need more time with their children to discuss their options before they’re deported. The government maintains that they were freely able to choose and have gotten all the time they need.

The new allegations seriously challenge the government’s claims. They paint a picture of a choice that isn’t being freely made at all — and one in which parents, instead of making a decision with their children, aren’t even being allowed to say goodbye.

Read the testimony below:

The full response from a Department of Homeland Security official:

Asking parents in ICE custody, who are subject to a final order of removal, to make a decision about being removed with or without their children, is part of long-standing policy (see Detained Parents Directive). For parents who have a final order of removal, and whose children have not received a final order, it is the parent’s decision whether to return with or without their children. ICE accommodates, to the extent practicable, the parent’s efforts to make provisions for the children. As appropriate, ICE will work with the parent to have the child return with the parent to their country of citizenship. When a child is in the care and custody of [the Office of Refugee Resettlement (ORR) under the Department of Health and Human Services], ICE works with ORR to reunite the parent and child and with the consulate to assist the parent with obtaining a travel document for the child. Alternatively, a parent may opt to have ORR pursue release of the child to another parent, guardian, or sponsor who has been approved by ORR. ICE does not interfere in the parent’s decision to allow the child to remain in the U.S. to pursue his or her own legal claim.

When parents are removed without their children, ICE, ORR, and the consulates work together to coordinate the return of a child and transfer of custody to the parent or foreign government upon arrival in country, in accordance with repatriation agreements between the U.S. and other countries. Unaccompanied children often are received by the country’s child welfare agency, who facilitate the reunification. When possible, ORR and ICE coordinate with in-country repatriation programs, which provide services to returned, unaccompanied children.