ICE used a fake university to weed out student visa fraud. But the students say they were duped. 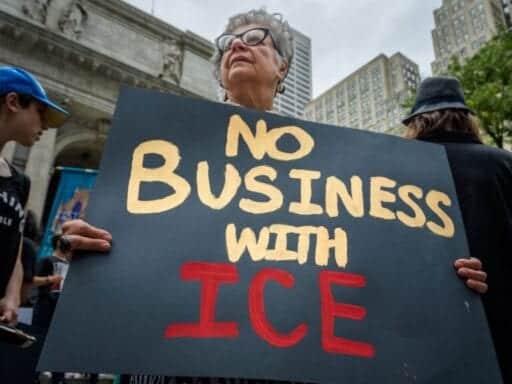 Share
Loading...
Protesters gather in Manhattan to advocate for businesses to sever ties with ICE on September 14, 2019. | Erik McGregor/LightRocket via Getty Images

Hundreds of students were arrested for violations of their visas.

Undercover US Immigration and Customs Enforcement agents have been operating a fake university designed to lure in immigrants seeking to obtain student visas fraudulently — but the students are claiming they are the ones who have been deceived.

ICE has arrested about 250 students at the University of Farmington in Farmington Hills, Michigan, for violating the terms of their visas, which mandate that they be enrolled full-time at a federally accredited educational institution while they complete their studies, an ICE spokesperson said Wednesday.

The University of Farmington, which ICE agents opened in 2015 to weed out fraudsters, did not qualify because it wasn’t a real educational institution: Although ICE advertised the university as offering graduate STEM courses, it did not have any teachers, curriculum, classes, or other educational activities. Its primary selling point, prosecutors say, is a ticket to an F-1 student visa — at the cost of $2,500 per quarter for graduate programs, plus an average $1,000 per month in fees, according to the Detroit Free Press.

Students on F-1 visas can remain in the US legally while they complete their studies and travel freely outside the country. After graduation, those students are eligible to apply for H-1B skilled worker visas if an American employer offers them a job in certain fields.

President Donald Trump’s administration has attempted to crack down on various forms of visa fraud, and student visas are no exception. To identify fraudsters, the administration has employed a strategy that immigration authorities have been using since well before Trump’s time in office: creating fake universities as a kind of sting operation.

In 2016, another fake university, the University of Northern New Jersey, captured headlines after authorities revoked the visas of more than 1,000 students and indicted 21 middlemen who helped recruit them.

But at a time when ICE is facing increased scrutiny and some have even called to abolish the agency entirely, the news of this latest fake university sparked outrage.

To recap: the feds created a scam school to entrap Indian immigrant-visa students, accredited it so it would look legit, took their money, then deported them for not knowing better, INCLUDING students who transferred out after realizing it was a scam. https://t.co/rdzVvAJSSn

Whether the fake universities have actually been effective in weeding out fraud, however, is up for debate. Attorneys for the students affected say that these operations are entrapment, designed to trick unknowing international students into paying thousands of dollars to a university, while having no way of knowing that their actions are illegal.

It’s also not immediately clear how ICE has been using what could amount to millions of dollars in tuition and fees that students paid to the university.

How the scheme worked

Undercover ICE agents advertised the University of Farmington on its now-defunct website as business and STEM-focused:

“Located in the heart of the automotive and advanced manufacturing center of Southeast Michigan, the University of Farmington provides students from throughout the world a unique educational experience. Our dynamic business administration and STEM curriculum allows students to rapidly apply their knowledge; preparing them to succeed in an ever-globalizing economy.”

According to the Detroit Free Press, the agents got a federal accreditation agency to give the University of Farmington its stamp of approval, and DHS listed it as an approved institution on its own website.

They also offered cash incentives to recruiters, who are now facing criminal charges, for signing up almost 600 students between February 2017 and January 2019, according to indictments filed in Michigan federal court.

The recruiters told students not to advertise their enrollment because the university lacked the proper certification. According to an ICE spokesperson, the students had all transferred from accredited schools to the University of Farmington.

The recruiters were also paid to solicit fraudulent academic records for purposes of tricking immigration officials into granting students’ visas, according to the indictments.

The students claim they were hoodwinked, but ICE says they should have known better

Students implicated in both the University of Farmington and the University of Northern New Jersey sting operations have claimed that, as foreigners, they had no idea that they were violating the terms of their visas and that they tried to confirm that the universities were legitimate. According to the Detroit Free Press, some students were even arrested after they realized the university was fake and transferred out of the school.

Now, they’re facing the prospect of having to leave the US, perhaps for good.

Almost 80 percent of the students arrested by ICE were given the opportunity to leave the country voluntarily, the ICE spokesperson said. Others have been forcibly deported or are challenging their deportation orders.

That could have long term effects: even leaving the country voluntarily could leave a black mark on any future application they file for immigration benefits in the US.

ICE says that it should have been obvious that the university was not an actual educational institution, but a vehicle for fraudulently maintaining a student visa, according to an indictment filed in Michigan federal court in January.

“Each of the foreign citizens who ‘enrolled’ and made ‘tuition’ payments to the university knew that they would not attend any actual classes, earn credits or make academic progress toward an actual degree in a particular field of study — a ‘pay to stay’ scheme,” the indictment says. “Rather, their intent was to fraudulently maintain their student visa status and to obtain work authorization.”

Carissa Cutrell, an ICE spokesperson, said in a statement Wednesday that the fake universities serve as a deterrent to immigrants who might exploit the student visa system, as well as provide insight into how fraud happens.

“It provides DHS with first-hand evidence of fraud and enhances its understanding of the way in which exploitation networks develop to facilitate fraud,” she said. “This, in turn, informs and improves DHS’s efforts to uncover fraud at schools where the students, and potentially school officials, seek to perpetuate violations either explicitly or through more subtle manipulation of the regulations.”

There’s little evidence, however, that fake universities have substantively aided ICE’s ability to detect fraud, especially given that the 600 students implicated in the University of Farmington scheme represent only a sliver of the more than 300,000 students issued visas annually in recent years.