If aliens call, what should we do? Scientists want your opinion. 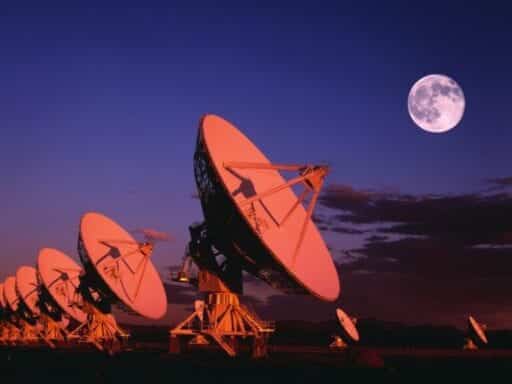 In the age of fake news, researchers worry conspiracy theories would abound before we could figure out how — or if — to reply to an alien message.

The answer to this question could affect all of our lives more than nearly any other policy decision out there: How, if it all, should humanity respond if we get a message from an alien civilization?

And yet politicians and scientists have never bothered to get our input on it.

At long last, that’s changing. A group of researchers in the UK this week released the first major survey on the question. The responses could help inform an international protocol for responding to first contact.

This is a big deal because, as Stephen Hawking and Elon Musk have warned, communicating with extraterrestrials could pose a catastrophic risk to humanity. In fact, if we send out a message and it’s received by less-than-friendly aliens, that could pose an existential threat not only to the human species but to every species on Earth.

Despite the high stakes, scientists have already sent out signals intended to be picked up by aliens. The first one went out in 1974, when the Arecibo radio telescope in Puerto Rico transmitted a broadcast containing information on everything from the position of Earth in our solar system to the double helix structure of DNA.

The Arecibo Observatory is currently running a contest that invites kids to design our next message to E.T. And later this year, an organization called Messaging Extraterrestrial Intelligence (METI) plans to transmit a new message containing information on the periodic table. There’s no law saying they can’t, or even that they need to get some international buy-in.

But the scientists at the UK SETI Research Network (UKSRN) think we’re woefully unprepared to handle an alien message if we receive one. And they say no one class of people should unilaterally decide humanity’s response. As astronomer Martin Dominik put it, “We want to hear people’s views. The consequences affect more people than just scientists.”

So UKSRN has launched a survey online and at the Royal Society’s summer science exhibition in London, which runs July 1-7. Here are three of the questions they’re asking the public:

1) Some people think we should send messages into space even if we don’t receive a message first. What is your opinion?

2) If we receive a message, do you think we should reply/make contact or not? Why?

3) What would you consider a credible source?

That third question reflects a worry I’ve been hearing from astronomers over the past couple of years: If a newly discovered message from aliens is announced, members of the public may use social media to spread all sorts of fake news and conspiracy theories about the aliens, their message, and what it will mean for humanity to communicate with them. In the weeks or months or years it could take scientists to decode the interstellar missive, fear-mongering could tank our chances of responding wisely — or at all.

An alien message “will take time to understand and if that work starts to drag out and there is nothing new we can say, the information vacuum will be filled with speculation,” John Elliott, a UKSRN co-founder, told the Guardian. “Conjecture and rumor will take over.”

In hopes of figuring out how to minimize the problem, the survey asks which information sources you’d trust: Main news channels? Direct quotes from scientists? Official government statements? Other sources?

It also asks if you’d post on social media about the discovery of an alien message. If so, would you restrict yourself to defending the scientific evidence? Or would you maybe engage in speculation? Would the absence of any news on the signal’s decoding encourage you to speculate?

You can see how it’d be useful to scientists to be able to predict the public’s response in these scenarios. But there’s a difference between how I say I’d react when I’m filling out a questionnaire, and how I’d actually react in real life. In addition to that limitation, the UKSRN survey is weakened by the fact that the same person can take it more than once from different devices.

Still, it’s an improvement over the lack of public consultation we’ve seen on these questions in the past.

Who gets to make rules about what happens in space?

For decades, the international community has been exploring the possibility of establishing a mechanism for global oversight when it comes to our engagement with outer space. But even if everyone were to agree that’s a good idea, the question of how to set it up and make it enforceable is incredibly complicated.

The 1967 Outer Space Treaty was an early effort in this vein. Ratified by dozens of countries and adopted by the United Nations against the backdrop of the Cold War, it laid out a framework for international space law. Among other things, it stipulated that the moon and other celestial bodies can only be used for peaceful purposes, and that states can’t store their nuclear weapons in space. The treaty suited its historical context, but it didn’t tackle the concerns people have nowadays about messaging an alien intelligence.

Another inflection point came in the late 1980s, when scientists with the organization Search for Extraterrestrial Intelligence (SETI) drafted a post-detection protocol, a list of best practices for what to do if and when we ever find aliens. One of its principles reads: “No response to a signal or other evidence of extraterrestrial intelligence should be sent until appropriate international consultations have taken place.”

This protocol was put on file as a brief with the Outer Space Treaty at the UN, and it was endorsed by the International Academy of Astronautics and the International Institute for Space Law. But it has no regulatory force when it comes to those who actively send out messages à la METI.

In 2015, SETI researchers, Musk, and others released a statement criticizing METI efforts. “We feel the decision whether or not to transmit must be based upon a worldwide consensus, and not a decision based upon the wishes of a few individuals with access to powerful communications equipment,” it said. “We strongly encourage vigorous international debate by a broadly representative body prior to engaging further in this activity.”

So far, though, there is still no “broadly representative body” regulating what messages can be sent into space or by whom.

Alessandra Abe Pacini, a researcher at Arecibo who helped generate the idea for the kids’ contest, told me the question of whether any message should be transmitted at all is “very controversial,” adding: “Even here among the scientists at Arecibo, there is no consensus.”

If some of the smartest astronomers in the world can’t come to an in-house agreement, is there any hope that the international community will ever agree? Maybe not, but the UKSRN survey may at least help us find out how much consensus there is or isn’t among the public. That’s a good first step.