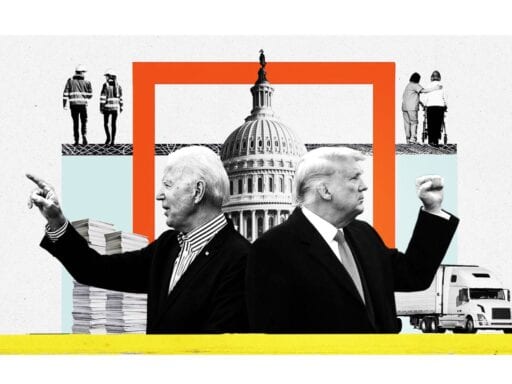 Biden could use Trump’s playbook to reverse his regulatory moves on pollution, worker safety, health care, and more.

These deregulatory actions and others taken by President Donald Trump’s administration have adversely impacted the health and safety of Americans, according to System Failure, an investigative series produced by the Center for Public Integrity and Vox.

But Trump’s actions may not stick. If former Vice President Joe Biden wins the November 3 election, he’ll have a few tools at his disposal to undo some of Trump’s regulatory maneuvers.

And if Democrats take control of both houses of Congress, they’ll be able to quickly wipe out regulations pushed through in the last 60 legislative days of Trump’s term, thanks to the Congressional Review Act, part of the Contract With America that Newt Gingrich and House Republicans campaigned on in 1994.

It won’t be clear until mid-January when the 60-day period began — because it all depends on how many days Congress meets between now and January 3, when its current term ends — but experts predict it started sometime during the summer.

Since July 1, for example, a Public Integrity analysis shows more than 1,000 regulatory changes have been published in the Federal Register, though only about 100 of them have risen to the level of being reviewed by the Office of Information and Regulatory Affairs, which is charged with sifting out “significant” regulations. The changes that could be subject to the Congressional Review Act include one that weakens methane emissions standards and one that opened the Arctic National Wildlife Refuge to drilling.

Trump and Republicans in Congress actually set in motion a number of rollbacks themselves when they took office, said Bethany Davis Noll, litigation director for the Institute for Policy Integrity at the New York University School of Law.

The Trump administration, more than any other in the US history, aggressively pursued the rollback of federal regulations, particularly the ones put in place by President Barack Obama — including a rule meant to prevent people with mental health issues from buying guns and a regulation aimed at keeping coal companies from dumping mining waste into streams.

Republicans used the Congressional Review Act to undo at least 14 of the Obama administration’s rules. Before Trump took office, the law had only been used once.

Biden has already said that if he wins, he plans to roll back more than 100 Trump administration public health and environmental regulations, including his reversal of protections for transgender people. We asked Davis Noll to explain how Biden will execute these rollbacks if he takes the election. This interview has been edited for brevity and clarity.

Our reporting with Vox showed that the Trump administration made a number of regulatory maneuvers that had an adverse effect on the health and safety of Americans. If Biden is elected, what options will his administration have if he wants to undo some of what Trump has done?

There’s a slew of options, starting with issuing quick rollbacks of the rollbacks. And the reason I say it’s an option to issue them quickly is because there was, often with these rules, a very robust record in place for the Obama-era rule — and then the Trump administration rolled it back with some cursory explanation.

The Biden administration can then pull that record up from the previous Obama administration rule and update it. And it should be pretty simple to say, “This record still works. You know, there hasn’t been that much time that has passed, and this rule that was vastly beneficial to the American people is still a good idea.” So that’s one thing.

In court, there’s a whole bunch of cases pending on Trump-era rules, and I would imagine that, in many of those cases, the Department of Justice will ask for a pause on litigation. Because the new agency isn’t going to want to defend the Trump-era rule. They’re going to want to figure things out and work on these rollbacks. And so we won’t see decisions out of court affirming Trump-era rules. And then we’ll see if the Congressional Review Act is an option too. Congress has to be aligned with the president, so both House and Senate have to have Democratic majorities.

In March 2019, your report “Regulation in Transition” outlined some of the aggressive tools Trump had used to roll back Obama-era regulations. You found that, through some strategies that other presidents had not used in the past, “the Trump administration was able to reach a far greater proportion of regulations finalized during Obama’s presidency than would have been possible under prior practices.” What did you find in your research, and how does it affect the average American?

One, it means now there’s this road map that the next administration is going to be expected to at least think about following. Because usually when you’ve got this tit-for-tat strategy going on between the two parties, it continues — and it accelerates, if anything. So it means that the new administration is under a lot of pressure to issue rules as quickly as possible.

The other thing that it does is it kind of puts us in this flip-flop world. It’s this era of partisan back-and-forth that is just very volatile. It means you can’t, as an agency, issue rules that will be long-lasting without this speedy work.

So what it does to the regulated industry is it creates a volatile atmosphere, and I think most people would agree that it’s better for our industry to not have that. Because we want our business leaders to be thinking about innovation and investment instead of things like, “What’s the regulation going to look like tomorrow?”

To be clear, these are actions taken in the executive branch, without Congress weighing in, correct?

Yeah, we’re talking about agency regulations. And another thing that has happened in the last 20 to 30 years is presidents have more and more turned to their agencies to make policy, because we can’t get much out of Congress these days. There’s just massive gridlock there. It’s been there for a while, and it seems like it’s continuing.

And we’ve definitely seen that. They said that about Obama, that he did this more than any prior president. And now with Trump, they’re saying he’s gone to his agencies even more than any prior president to make policy, because he can’t get anything out of Congress. Like with the Affordable Care Act repeal that he wanted — that didn’t happen. And so he’s just chipping away at the Affordable Care Act through rulemaking.

That’s a lot of power concentrated in one branch of government. So Trump found a new, more aggressive way of rolling back his predecessor’s regulations. Did he set a precedent that he’s going to regret if Biden wins?

“The whole country is worried about the pandemic, and these agencies are issuing rules that roll back vehicle emissions regulations”

Our June analysis found that, since Trump declared the coronavirus a national emergency in March, the White House signed off on or was reviewing more than 250 temporary or permanent regulatory actions. How does this compare to past administrations?

It’s pretty typical that administrations issue a lot of rules in the final days. That happens a lot. I have definitely not done an empirical study on how close the Trump administration is to prior administrations, but it’s not a new thing. Maybe it’s new that it’s happening in the middle of a pandemic.

It’s definitely something to behold when the whole country is worried about the pandemic, and these agencies are issuing rules that roll back vehicle emissions regulations. The priorities don’t seem like they’re in the right place.

Do you think they’re trying to take advantage of the fact that people are preoccupied by the pandemic?

I guess I can’t really say what the intent is. But I also think they would have issued these rollbacks anyway. I’m sure the pandemic didn’t change that. It’s just something else, especially when it’s a respiratory illness that’s affecting the country, to have agencies issuing rules that roll back emissions cuts that would have helped, that would have cleaned up the air.

It just makes it more striking how these agencies are acting far outside the scope of what Congress envisioned.

You study litigation and keep track of Trump’s regulatory win-loss rate and what role courts play in the regulation landscape. What have you found so far about the Trump administration?

What I’ve been tracking is court decisions on agency actions to either roll back regulations or make policy for the president. Like I was saying before, presidents use their agencies to make policy. One of the best ways to see if it’s working is: What’s the success rate in court? The overall success rate right now is 15.6 percent. And it stands in stark contrast to prior administrations.

Prior scholars have looked at prior administrations and just consistently, across the board, have found that agencies win 70 percent of the time, more or less. And so to see a win rate now of 15.6 percent, it’s very surprising. It’s very, very shocking. Also, you can sort on my tracker for deregulation, and the win rate for deregulatory cases is 13.8 percent. So it’s a little lower. So the agencies are not doing very well in court.

Why do you think that is?

There’s two big issues that consistently have come up. One is agencies are acting outside their statutory authority. And two is they are not providing the required explanation for what they’re doing. There’s this standard that requires agencies to provide a reasoned explanation for their decision, and in many cases, the agencies are doing something that’s actually harmful.

With the vehicle emissions rollback, the baseline was a rule that was going to improve fuel economy over time and reduce greenhouse gas emissions from cars. And so if you roll that back, what you’re doing is you’re increasing greenhouse gas emissions from cars and reducing fuel economy. So that’s a harmful thing. And it’s not that easy to give an explanation for that. That case is pending.

But there are a whole bunch of other cases that have already been decided that are like that, where the agency is doing something that’s actually harmful, and they haven’t been succeeding in court, when they try to explain why they did what they did.

What else should we keep an eye on if Biden wins?

If we’re asking about what we imagine we could see out of a new administration, I predict agencies will go back to doing their jobs. I don’t think that’s like a tit-for-tat thing.

I think those bounds are still there, those guardrails. Their importance has been reaffirmed in the last few years and I don’t think the Trump administration has been successful at kicking them down. So I don’t imagine that the next administration would want to act outside those bounds.

Study: Trump rallies may be responsible for an estimated 700 Covid-19 deaths
A top Democratic defender of the filibuster says it may need to go
The mystery of Germany’s low coronavirus death rate
NYC is investigating Amazon for firing a worker who protested coronavirus working conditions
4 key Kentucky primary races to watch on Tuesday
The Supreme Court just quietly gutted antitrust law