If you are a unionized journalist, this labor ruling should worry you 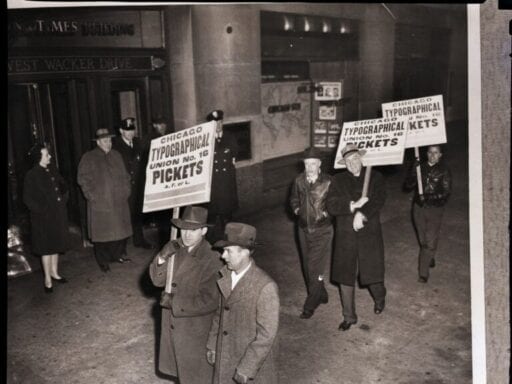 Share
Loading...
Members of the Chicago Typographical Union picket outside the Chicago Sun and Times building after voting to walk out on Chicago’s six daily newspapers, January 1947. | Getty Images

America’s top labor law enforcer signaled last week that many unions, including media unions, may be left without recourse if their employer engages in illegal union-busting.

Two letters released by the National Labor Relations Board (NLRB) earlier this month suggest that requiring many employers to comply with federal labor law violates the First Amendment. The letters, signed by regional directors within the NLRB’s bureaucracy, inform two individuals who filed separate complaints against presidential campaigns that the charges against those campaigns will be dismissed.

The two letters concern labor law charges filed against the presidential campaigns of Sens. Elizabeth Warren (D-MA) and Bernie Sanders (I-VT). The charge against the Sanders campaign was filed by a former Sanders campaign staffer in Iowa while the charge against the Warren campaign was filed by a Sanders supporter. (Federal law permits third parties to file labor law charges against an employer other than their own.)

Rather than investigating these accusations against the two campaigns, however, the NLRB’s enforcement arm decided to dismiss the charges outright. Among other things, the letters explain that the board’s general counsel “asserts that the prosecution of a presidential election committee, which is so entwined with political speech protected by the Constitution, could raise serious First Amendment considerations.”

The implication, in other words, is that the board’s general counsel — Peter Robb, a Trump appointee — will not enforce federal labor law against employers who engage in large amounts of “political speech protected by the Constitution.”

That has some pretty serious implications that stretch far beyond political campaigns.

Although the general counsel was writing about political campaigns, one implication of his apparent position is that federal labor law cannot be enforced against any media company that engages in unfair labor practices against its workers or their union — or, at least, any media company that produces content related to policy or politics. As Charlotte Garden, a labor law professor at Seattle University School of Law, told me, Robb’s interpretation of the First Amendment raises concerns that he “would decline to bring a charge based on, say, a newsroom’s decision to fire a reporter.”

As the Warren and Sanders letters note, moreover, the general counsel “has unreviewable discretion to determine whether to issue complaint on unfair labor practice charges.” By law, the NLRB has exclusive authority to enforce much of the law protecting workers and unions. And the general counsel has exclusive authority to decide which enforcement actions the NRLB pursues. That means that if a journalist were fired because they engaged in legally protected activity such as trying to unionize their employer, the only agency capable of protecting that journalist might refuse to do so.

According to Garden, the general counsel “is the only game in town” if an employer violates any of its employees’ rights to organize.

That means that, if Robb clings to the view that companies engaged in large amounts of First Amendment-protected activity are immune from labor law enforcement, there will be no one to protect workers’ rights to join a union, no one protecting their right to join together against abusive work conditions, and no one who can force an employer to actually bargain with a union, at least if the employer’s core business involves First Amendment activity.

We cannot know whether Robb will carry his understanding of the First Amendment to its logical conclusion until someone files a charge against a media company. Nevertheless, the views expressed in the Warren and Sanders letters suggest that any company whose business is “entwined with political speech protected by the Constitution” may be immune from enforcement from Robb’s office.

Just in case there is any doubt, it is not true that employers can immunize themselves from federal labor law if they engage in a substantial amount of First Amendment-protected activity.

This issue arose in Associated Press v. NLRB (1937), a Supreme Court case where the Associated Press argued that it could violate a federal law protecting workers who attempt to unionize because the work of a newspaper company is so completely intertwined with the First Amendment’s guarantee of free speech and freedom of the press. The Supreme Court rejected this argument, explaining that “the publisher of a newspaper has no special immunity from the application of general laws.”

A lot has changed since 1937 when Associated Press was decided. For one thing, the current Supreme Court is much more hostile to unions than the Court was in 1937, and it signaled in Janus v. AFSCME (2018) that it is open to arguments that the First Amendment can be read to undermine unions.

The First Amendment was also a shriveled, desiccated husk in the 1930s, largely due to a series of World War I era decisions that allowed the government to criminalize dissent. Indeed, in Debs v. United States (1919), the Court held that Eugene Debs, the great union organizer and Socialist presidential candidate, could be imprisoned because he gave a speech denouncing government censorship.

The Court did not breathe real life into the First Amendment until the 1960s.

Nevertheless, the rule announced in Associated Press is sensible. As the Court explained in its 1937 decision, a newspaper publisher “has no special privilege to invade the rights and liberties of others. He must answer for libel. He may be punished for contempt of court. He is subject to the antitrust laws. Like others, he must pay equitable and nondiscriminatory taxes on his business.” The First Amendment might intervene if the government enacted a law targeting “the impartial distribution of news,” but media companies must obey the same laws as everyone else.

But the government may still require me to pay taxes on the salary I earn as a journalist. It may still require me to obey speeding laws if I drive to an event that I plan to cover for Vox. If I break into a senator’s office and steal documents, I can still be prosecuted for doing so, even if I intend to report on the content of those documents. The First Amendment protects me from laws that target my speech as speech but it does not shield me from all laws.

Contrary to Robb’s suggestion in the Sanders and Warren letters, moreover, the same rule applies to political campaigns. A Warren staffer cannot break into someone’s home to learn how they intend to vote. Nor can the Sanders campaign commit robbery in order to fund its political operations. Under the First Amendment, the government cannot censor a campaign’s political speech, but it can require campaigns to follow the same laws as everyone else — and that includes labor laws.

It’s unlikely that the Supreme Court would tear down the general rule that campaigns and media companies must follow the same laws as everyone else, even if the Court’s current majority is hostile to union rights, because the implications would be so profound. There is no principled way to distinguish a decision holding that media companies may violate labor laws from a decision holding that the same companies don’t have to pay taxes.

And yet, because the NLRB general counsel has the final say over which enforcement actions are considered by the NLRB, it may not matter what the courts have to say. If Robb takes an idiosyncratic or even a ridiculous approach to the Constitution, no one can force him to bring enforcement actions that he does not want to bring.

There is legislation pending in Congress, the Protecting the Right to Organize Act, which would allow “any person who is injured” by a violation of the federal law protecting union rights to file a lawsuit in federal court. But this bill has no shot of being passed under the current Congress. For the time being, media unions may be up against a wall if Robb takes his unusual view of the First Amendment to its logical conclusion.

CNN fact-checked the presidential debate. It was almost all about Trump’s lies.
Intelligence reports warned about a pandemic in January. Trump reportedly ignored them.
Trump claims the US lost $817 billion on trade last year. That’s wrong.
Marcia Fudge confirmed as housing and urban development secretary
More meetings, longer hours, living anywhere: How the coronavirus changed office work
4 winners and one loser from primary elections in Florida, Arizona, and Oklahoma