I’m an environmental journalist, but I never write about overpopulation. Here’s why. 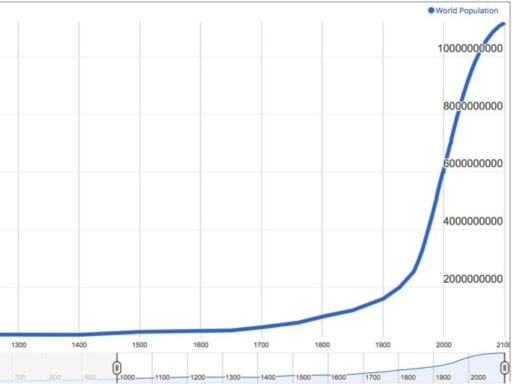 Since you asked (many times).

This piece was originally published in September 2017. It has been lightly updated.

I did an event with environmental journalist (and personal hero) Elizabeth Kolbert in September 2017, in which we discussed various matters related to journalism and climate change. Subsequently, one of the attendees wrote and asked why I hadn’t talked about population. Isn’t overpopulation the real root of our environmental ills?

Anyone who’s ever given a talk on an environmental subject knows that the population question is a near-inevitability (second only to the nuclear question). I used to get asked about it constantly when I wrote for Grist — less now, but still fairly regularly.

I thought I would explain, once and for all, why I hardly ever talk about population, and why I’m unlikely to in the future.

Math confirms that population is indeed a factor in environmental impact

Human impact on the natural environment is summed up in a simple formula:

All are rising. (Bill Gates has a slightly more complicated formula related to carbon dioxide, but P is a variable in his too.)

The current global population has crossed 7.5 billion and is heading upward. The latest UN projections have it hitting 8.6 billion by 2030, 9.8 billion by 2050, and 11.2 billion by 2100. Average fertility rate will decrease, but that effect will be overwhelmed by the absolute numbers. (There are many arguments out there that UN is overestimating population growth, but let’s stick with their numbers for this post.)

The UN expects over half the growth out to 2100 to be concentrated in just nine countries, listed here in order of their expected contribution:

Most of those people will be fairly poor (by Western standards, though hopefully less so than their forbearers), which means their per-capita consumption of resources will be fairly low. Nonetheless, cumulatively, adding 2.3 billion people by 2050 amounts to enormous additional resource use and pollution (including greenhouse gases).

Mitigating some substantial percentage of that population growth would be one way to better environmental conditions in 2050. It would also have more impact than virtually any other climate policy. (More on that later.)

However. That human numbers are, axiomatically, part of the story of human impact does not mean that human numbers have to take center stage. Talking about population growth is morally and politically fraught, but the best ways of tackling it (like, say, educating girls) don’t necessitate talking about it at all.

History is replete with examples, but perhaps the most germane recent episode was less than 20 years ago, at the Sierra Club, which was riven by divisions over immigration. A group of grassroots members, with some help from powerful funders, attempted to take over the national organization.

These members advocated sharply restricting immigration, saying the US should be reducing rather than increasing its population. Their contention is that the country’s open immigration policies are hurting the environment by bringing in poor immigrants and making them richer, thus increasing their environmental impact. Of course, they swore up and down that xenophobia had nothing to do with it.

The Sierra Club won that fight, and the “green anti-immigrant” movement has mostly been driven to the fringes, but conservative media is still getting ratings out of it. If you can stomach it, watch this entire segment with Tucker Carlson of Fox News — it hits all the usual notes, culminating in an interview with some professor who wrote a book about reducing immigration for environmental reasons.

I don’t doubt that it’s possible to be concerned about the environmental stresses population brings without any racism or xenophobia — I’ve met many people who fit that description, and there were well-meaning (if quite mistaken) population-focused groups in the ’70s and ’80s — but in terms of public discussion and advocacy, anyone explicitly expressing that concern starts out behind the eight ball. The mere mention of “population” raises all sorts of ugly historical associations.

Public health groups have largely cottoned to this. Even the ones that have “population” in the name focus on family planning rather than population as such. They’ve figured out something important — something not all greens have figured out — which is that the best ways to address population don’t necessarily involve talking about it at all.

So what are those ways?

There are two ways of looking at the problem of growing population on a finite planet. Depending on which you think is most important, there are different ways to address it, none of which require discussing population.

Female empowerment is the most effective carbon mitigation strategy

The first way to look at population is as a pure numbers game. More people means more consumers and more emitters, so the thing to do is slow the rise of population. Specifically, since most of the new people are going to come from poor or developing countries, the question is specifically how to slow population growth there.

Luckily, we know the answer. It is family planning that enables women to have only children they want and choose, and education of girls, giving them access to income opportunities outside the home. We know that women, given the resources and the choice, will opt for smaller families.

Those are the two most powerful levers to bend the population curve. They are also, in and of themselves, an enormously powerful climate policy. When Paul Hawken and his team investigated and ranked carbon-reduction solutions for their Drawdown project, they found that the combination of the two (call it the female-empowerment package) carried the most potential to reduce greenhouse gases later this century, out of any solution. (Together they could prevent 120 gigatons of GHGs by 2050 — more than on- and offshore wind combined.)

So if you are concerned about the growth in population, make yourself a champion of female empowerment in the developing world. You will be contributing to the most effective solution to the problem without any of the moral baggage.

And next time you’re at an environmental event, maybe instead of asking the population question, ask the female empowerment question. Why aren’t climate hawks talking about it more? They should be!

Some population units consume and emit more than others

If your concern is the creation of new consumers and emitters, your gaze should be drawn to those who will consume and emit the most, i.e., the wealthy.

For one thing, fertility tends to decline with wealth anyway. For another, any targeted attempt to engineer population decline is going to run into an unholy thicket of moral and political resistance.

If you approached the problem that way, under the banner of reducing global income inequality, you would find many allies. Income inequality is a top-line concern of people and organizations all over the world, even some conservatives these days.

Reducing high-end consumption could have an enormous short-term impact on carbon emissions, as climate scientist Kevin Anderson is always saying. Shifting wealth within populations — reducing the number of very wealthy and the number in poverty — can have as much carbon impact as reducing overall population.

So maybe, at the next environmental event, you could ask the income inequality question rather than the population question.

So that, for the record, is why I hardly ever talk or write about population. (I will now send all future askers of the population question to this post.) It is high risk — very, very easy to step on moral landmines in that territory — with little reward.

And where talk of population control is rarely popular (for good reason), female empowerment and greater equality are a) goals shared by powerful preexisting coalitions, b) replete with ancillary benefits beyond the environmental, and c) unquestionably righteous.

So why focus on the former when the latter gets you all the same advantages with none of the blowback? That’s how I figure it anyway.

Trump uses Border Patrol agents as props during Fox News interview
Fox News thinks Joe Biden’s DNC speech was “a home run”
The Trump administration reportedly wants to push countries to decriminalize homosexuality
Trump has nominated Kelly Craft to be the next UN ambassador. Here’s who she is.
The Senate just failed to overturn a Trump administration rule on the Affordable Care Act
Bill Barr’s revealing defense of the Flynn decision