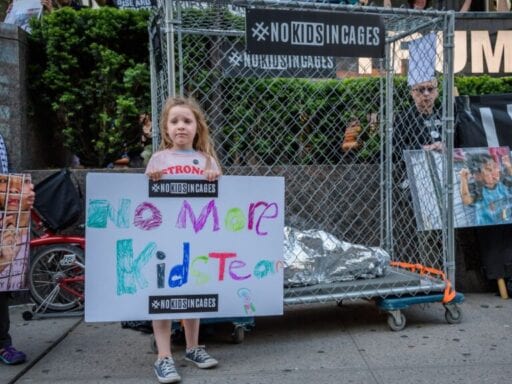 A girl protests the Trump administration’s detention of immigrant children as part of the #NoKidsinCages campaign in New York in June 2019. | Erik McGregor/Pacific Press/LightRocket via Getty Images

From the Super Bowl to Des Moines, advocates are trying to revive outrage over immigration detention.

Ahead of the Iowa caucuses on Monday, immigrant advocates (with some help from Jennifer Lopez) are reminding voters that President Donald Trump’s immigration policies have come at the expense of “kids in cages.”

During the Super Bowl’s halftime show on Sunday night, J. Lo performed “Born in the USA” while surrounded by children sitting in what looked like cages — an apparent critique of the Trump administration’s immigration detention policies:

Props to Jlo, Shakira and/or the choreographer for the necessary statement with Latino children in cages singing””Born in the USA”. #SuperBowl #SuperBowl #PepsiHalftime pic.twitter.com/gyQDsmXo3l

And on Monday, the immigrant advocacy group RAICES invoked the same imagery, announcing that it had installed a dozen exhibitions of children covered in mylar blankets in chain-link cages throughout Des Moines, including at caucus sites and city hall. Each installation plays a real recording of a child who was kept in detention:

BREAKING: We’ve placed more than a dozen cage installations across the city of Des Moines, asking that we #DontLookAway at the continued separation & caging of families, record deportations & hostility towards immigrants & refugees.

Both J. Lo and immigrant advocates are trying to draw attention back to a crisis that the public appears to have forgotten.

In June 2018, photos emerged of children kept in border patrol holding facilities known as “hierleras,” Spanish for iceboxes, where they slept on concrete floors with nothing but mylar blankets in chain-link pens. The facilities weren’t designed for long-term stays; under federal guidelines, migrants are supposed to be either released into the interior of the US or sent to US Immigration and Customs Enforcement custody within 72 hours. But in practice, migrants were held much longer than that, sometimes for additional days or weeks at a time.

The photos inspired mass protests nationwide, including a sit-in at the Capitol where advocates wrapped themselves in mylar blankets. Few of Trump’s immigration policies — perhaps only his travel ban on citizens of seven Muslim-majority countries — have drawn so much public outrage.

Many court rulings and congressional hearings later, migrants are still forced to live in inhumane conditions in under-regulated detention centers, leading some to even go on hunger strikes.

The situation has changed to some degree: Courts have ordered the administration to provide migrants with at least some basic amenities in detention — including soap, toothbrushes, and sleeping pads. Erika Andiola, chief advocacy officer at RAICES, said the organization is still hearing from migrants that they and their children are being detained in the hierleras, but not on the same scale as before.

Nor is the US detaining as many children as it once was. In May 2019, when apprehensions of migrants at the southern border peaked, the Department of Health and Human Services reported that it had an average of over 13,000 children in custody. As of September 2019, the most recent month for which data is available, that number had decreased by over 50 percent to 6,000 children.

The decrease could be attributed to the Trump administration’s “Remain in Mexico” policy, officially known as the Migrant Protection Protocols, under which more than 60,000 asylum seekers, including both adults and children, have been sent back to Mexico to wait for their immigration court hearings in the US. Rather than detaining families, the Trump administration has said that it is now sending the vast majority of families back to Mexico instead.

But even if the phenomenon of “kids in cages” is no longer the most pressing crisis facing the immigrant advocacy community, it’s a way to create conversation around Trump’s more recent immigration actions.

Despite the meaty discussion of former Housing and Urban Development Secretary Julián Castro’s proposal to decriminalize border crossings early in the Democratic primary race, immigration has received a cursory treatment in the Democratic debates. And since the summer of 2018, when Trump’s policy of separating immigrant families stoked public outrage, the president’s many efforts to dismantle the asylum system, cut down on refugee admissions, send migrants back to Central America, and keep out low-income immigrants have gone largely unnoticed.

The lack of attention on these policies has frustrated immigrant advocates. But they’re trying to spur political mobilization by invoking “kids in cages” as a kind of shorthand for everything they think the public should find abhorrent about Trump’s immigration policies. Much like Trump supporters’ “Build the Wall” mantra, “kids in cages” has become an effective political messaging tool.

“The horrors at our border and throughout our immigration system are too often ignored by the public and politicians,” Andiola in a statement. “We’re asking people in Iowa and across the country: Don’t look away from the terrors enacted in your name. This anti-immigrant crackdown has to end.”