Immigrants were largely overlooked in the US’s coronavirus response. The latest relief bill aims to fix that. 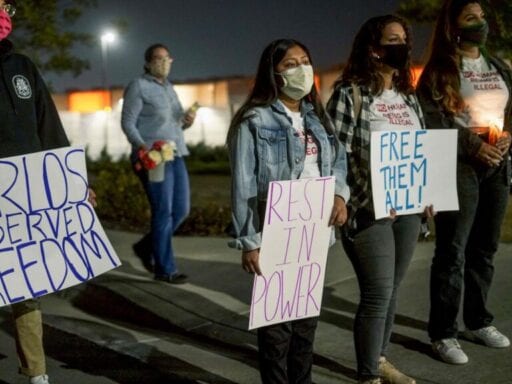 Share
Loading...
Protesters stand outside a detention center in Otay Mesa, California, for a vigil to commemorate Carlos Ernesto Escobar Mejia, the immigrant who died of Covid-19-related symptoms in detention. | SANDY HUFFAKER/AFP via Getty Images

Here are five ways the Heroes Act would help immigrants impacted by the pandemic.

House Democrats’ $3 trillion coronavirus relief package aims to address some people left out of previous bills, including unauthorized immigrants who have been critical to the US’s response to the pandemic but have not been eligible for stimulus funds.

The bill, known as the Heroes Act, would shield unauthorized immigrants working in essential fields from deportation and make them eligible for federal stimulus funds as well as clear the way for more foreign health care workers to help fight coronavirus in the US. It would also deliver additional health care benefits to immigrants who are eligible for Medicaid and require immigration authorities to release people from immigration detention where possible.

The bill makes significant strides toward closing the gap in relief for immigrant communities during the pandemic. But it includes one notable omission: It does nothing to help refugees at a time when resettlement efforts have come to a standstill and refugees who have recently arrived in the US aren’t eligible for federal stimulus checks.

The bill is facing opposition within both parties. Republicans are not convinced that another aid package is warranted after the $2.2 trillion CARES Act signed in late March, and progressive Democrats are pushing for even more aid. The bill, therefore, isn’t likely to pass the House, but Speaker of the House Nancy Pelosi is still planning to move forward with a vote as early as Friday, according to Politico. Even if it fails, it could be a starting point for future negotiations over coronavirus relief.

Here are five provisions the bill makes for immigrants:

1) Cash payments to immigrants and their families

The bill would issue coronavirus stimulus checks to unauthorized immigrants and their families, who are currently excluded from such relief under the CARES Act. They would become eligible for the first round of stimulus checks, which the government started sending out in April, as well as a proposed second round of checks, which would amount to up to $1,200 for each tax filer and each of their dependents, depending on household income.

The CARES Act excludes those in households with people of mixed-immigration status, where some tax filers or their children may use what’s called an Individual Taxpayer Identification Number (ITIN). An estimated 16.7 million people live in mixed-status households nationwide, including 8.2 million US-born or naturalized citizens.

The IRS issues ITINs to unauthorized immigrants so they can pay taxes, even though they don’t have a Social Security number. If anyone in the household uses an ITIN — either a spouse or a dependent child — no one in the household qualifies for the stimulus checks unless one spouse served in the military in 2019.

Immigrant advocacy groups have challenged the CARES Act on the basis that it unlawfully discriminates against US citizens who have unauthorized immigrant family members.

The bill would require US Immigration and Customs Enforcement to review all the files of detained immigrants and release all those who aren’t subject to mandatory detention and don’t pose a risk to public safety or national security. Alternatively, the agency could explore comparatively low-cost alternatives to keeping immigrants in detention.

That could include requiring them to wear ankle bracelet monitors or entering them into programs like the now-defunct Obama-era Family Case Management Program. Under that program, which Trump ended in June 2017, families were released and assigned to social workers who aided them in finding attorneys and accommodation and ensured that they showed up for their court hearings.

The bill also exacts new standards for immigration detention. Detainees would have to be provided with free and unlimited soap as well as phone and video calls so they can communicate with their family members and attorneys, who are not allowed to visit most detention centers in person during the pandemic.

Only after an outcry from immigrant advocates did ICE recently institute national policies encouraging social distancing in its facilities and provide soap, hand sanitizer, cleaning supplies, and personal protective equipment. The agency has also been releasing detainees who are medically vulnerable to Covid-19, but there are still almost 30,000 immigrants in detention across more than 130 private and state-run detention facilities nationwide. As of May 14, 943 detainees tested positive for the virus.

There is, therefore, a national advocacy push for the administration to alter its enforcement priorities to release all detainees or at least those who haven’t committed serious crimes; while immigrant advocates campaign for their release even in the best of times, their message has become even more urgent amid the outbreak.

These immigrants have been accused of civil immigration violations, such as overstaying a visa or residing in the US without authorization, and they have been detained while they wait for the outcome of their deportation cases. Some may well be allowed to remain in the US eventually, depending on what an immigration judge decides.

The federal government has significant discretion to determine who it subjects to this kind of civil detention. Toward the end of Barack Obama’s presidency, he prioritized only those immigrants who had a record of committing serious crimes, releasing others into the interior of the US. But President Donald Trump, by contrast, has sought to detain any unauthorized immigrants anywhere in the US — even amid the pandemic.

Under the bill, essential workers would be shielded from deportation and offered employment authorization during the pandemic, and employers in critical industries would not be penalized for hiring unauthorized immigrants.

Americans have relied on low-wage workers to keep essential services running during the pandemic, from harvesting and delivering food to cleaning public spaces. But many of these workers who lack legal immigration status have done so without receiving any financial assistance from the federal government.

Unauthorized immigrants make up about a quarter of farmworkers and 8 percent of the service sector and production workers. Many don’t have any choice but to continue working despite public health warnings to stay home because they aren’t eligible for unemployment benefits or federal stimulus checks. The Heroes Act would at least give them some financial safety net and relieve them of fear of deportation.

4) Making it easier for foreign medical professionals to fight coronavirus

The bill would speed up the processing of visas and green cards for medical professionals. Anyone seeking to practice medicine, conduct medical research, or pursue education or training to combat Covid-19 could be approved for a visa on an expedited basis. Consulates that are closed for regular business abroad would have to conduct visa interviews over teleconference or grant an emergency visa appointment in person. Foreign physicians who have already completed residency programs in the US could also get green cards more quickly.

Once they’re approved for a visa or green card, medical professionals would have more flexibility to go where they’re needed under the bill. Those on H-1B visas for skilled workers would be able to transfer to other hospital systems and offer telemedicine services without having to apply for a new visa under the bill. Medical students will also be able to transfer their rotations within their host institution and may be compensated for their work during the pandemic. They could also do work outside of that approved program if it relates to fighting Covid-19.

Foreign doctors have long faced barriers to practicing in the US. Despite being willing to contribute to the country’s coronavirus response, many have been unable to do so, either because they have been shut out of American residency programs or because the immigration system stands in their way.

Hospitals across the country are facing staffing shortages. New York City has asked former medical workers to come out of retirement to deal with the increased patient load. So has the Veterans Affairs medical system, which already has about 44,000 medical vacancies that it has been struggling to fill amid a competitive market. Washington, DC, has even been recruiting volunteers without any medical training.

The US was projected to face a shortage of doctors even before the pandemic hit: The Association of American Medical Colleges had estimated the shortage could reach 46,900 to 121,900 physicians by 2032. And in rural areas, particularly in states like Mississippi and Arkansas, doctors were already in short supply. The US health system relies heavily on immigrants, who make up 17 percent of all health care workers and more than one in four doctors.

5) Health benefits for immigrants regardless of status

The bill would allow unauthorized immigrants without health care coverage to qualify for no-cost testing, treatment, and vaccines related to coronavirus.

US Citizenship and Immigration Services has announced that it won’t consider the use of free testing services when evaluating whether immigrants will likely end up relying on public benefits under the “public charge” rule, which went into effect in February. That rule gives immigration officials much more leeway to turn away those applying to enter the US, extend their visa, or convert their temporary immigration status into a green card if it is deemed they would likely use public services now or in the future.

The agency also said it won’t weigh Covid-19 treatment or preventive care, such as a vaccine if it is eventually developed, under the rule — even if those services are covered under Medicaid.

The US is about to begin the first big test of Covid-19 vaccine distribution
Home, bittersweet home
How the US’s Covid-19 death toll compares to that of other wealthy countries
A Michael Bloomberg presidential run is unlikely to help moderate Democrats’ cause
Bloomberg’s first TV interview showed him to be exactly who progressives feared he was
Protesters confront McConnell about family separations as he leaves a Kentucky restaurant