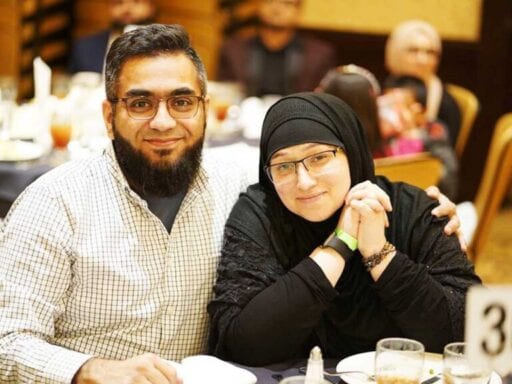 Share
Loading...
Zeba Khan (right), with her husband in 2019, has a compromised immune system and can’t get necessary physical therapy due to the coronavirus pandemic. “I have people that I need to live for, even if I’m in pain for it.” | Courtesy of Zeeba Khan

Trump wants to loosen social distancing guidelines. That could be fatal for the immunocompromised.

Zeba Khan hasn’t left her Texan house in over two weeks, not even for a walk, because she is immunocompromised. Contracting the novel coronavirus and the disease it causes, Covid-19, could easily lead to her death. It’s a risk she isn’t willing to take as a mother of three kids, one of whom has special needs.

This means that she can’t get the physical therapy she needs to ease the pain that comes from the two herniated discs in her back, a symptom of her genetic defection that compromises her immune system. Instead, she’s been relying on pain medication, which simply isn’t enough.

“To be honest, it really sucks — being in pain every day, when it’s resolvable, [and] staying back because some people just won’t do what needs to be done to end this lockdown,” she said. “It’s frustrating, but I’d rather live in pain than die. I’d rather be alive and suffering than dead. I have people that I need to live for, even if I’m in pain for it. It’s the cost of staying alive.”

Khan is just one of the 10 million immunocompromised people in the US who could be affected by the pandemic. Along with people over the age of 65, the Centers for Disease Control and Prevention has designated immunocompromised people as a group with a higher risk of serious illness. Because their impaired immune system has a weakened ability to fight infections, these people are more likely to contract the novel coronavirus and die from it. Khan said that means she has to take far more drastic measures — no walks, no visitors, and definitely no grocery runs — than able-bodied people to stay safe.

Yet there are already signals from the government that social distancing could end soon for the sake of the economy. This week, President Donald Trump repeatedly said he wanted society up and running by Easter, which is only a little more than two weeks away. It’s a timeline that many health experts are skeptical of and warn could cause an uptick in cases. And yet on Thursday, he doubled down in a letter to governors, saying that his administration is developing new, more relaxed social distancing guidelines for state and local officials.

Trump’s rush to get people back to their jobs would have dire consequences for immunocompromised people. Returning to work would mean risking death. The only other option, however, would be isolating themselves indefinitely. Neither are optimal scenarios, and Khan said she’s been disheartened by the government’s narrative that prioritizes the economy over people.

“People are like, yeah, it’s okay if the immunocompromised die,” she said. “I’m not okay with my son’s mother dying. Nobody should be okay with their own parents dying. It’s heartless to be perfectly alright with someone else’s death.”

Since the coronavirus can be fatal for immunocompromised people, they’re experiencing great anxiety

The pandemic is bringing back harrowing memories for Elyse Hale, a 32-year-old immunocompromised woman living in Michigan. She especially has to be careful around respiratory diseases because of her history of bilateral pneumonia, an infection that affected both her lungs. She doesn’t want to repeat this physical and emotional pain with Covid-19.

“Having to relearn how to breathe, having been in that boat before, it’s a horrifying experience,” she said. “Just laying down in bed it had felt like I was drowning. I don’t ever want to experience that nightmare again, so hearing the experiences of others who are currently going through coronavirus is bringing back that nightmare again for me.”

She said she’s doing her best to not let the fear of her weakened immune system consume her life, and sticks to keeping good hygiene. The pandemic, however, makes that very difficult. Even a simple Amazon package can trigger anxiety, she said. She’ll end up spending hours thinking about the package — and the germs that could potentially kill her — while letting it sit at the bottom of the stairs, even though she can logically just wash her hands afterward. After episodes like this, she’s learned to make light of the situation by joking about it, but concern still lingers.

Tori Holman from Florida, who has a compromised immune system because of her liver transplant from October, has also struggled with anxiety since the pandemic. A lot of her time is spent cleaning the surfaces around her so that she’s not in contact with germs, including the groceries her mom buys. She hasn’t been able to leave the house since late February. The one time she made it outside was when she had a medical scare, and even then she was covered head-to-toe with clothes and gloves.

“It’s really, really scary,” she said. “I’ve gotten depressed because I haven’t been able to see a lot of people. … And anxiety is a really huge factor because you never really know. Especially the whole ‘you can have it without having any symptoms,’ that one scares me a lot because you never know if someone has it.”

Alexis White, a college student with a compromised immune system, has learned to tame her anxiety due to her extensive experience with self-isolation in the past. A busy schedule helps: She said her days back at home in Missouri are still packed with practicing physical therapy moves and mindful resting.

However, she said she may have to start worrying about food supplies if the pandemic continues for an extended period of time — a concern unique to the many immunocompromised people with dietary restrictions. Although experts have assured the virus won’t cause any disruption in the food supply, White said she already had a hard time finding food items that fit her dietary needs — she is allergic to gluten and dairy — in Missouri even before the pandemic. These dietary restrictions are yet again another distinctive burden that immunocompromised people have to bear during times like this. And it’s a condition that could happen to anyone, White pointed out.

The immunocompromised are being deprioritized over their needed medication

Trump prioritizing the economy above public health isn’t the only way he’s been putting immunocompromised people in danger. His irresponsible messaging has also led to a shortage in drugs that are necessary for lupus and rheumatoid arthritis patients, another group of people with compromised immune systems.

For the past week, Trump has been touting hydroxychloroquine as a miracle drug for Covid-19, even though there has been no evidence of whether it’s effective, or even safe. The president himself even acknowledged that he couldn’t predict if the drug would work, but that didn’t stop him from promoting it as a potential solution to the pandemic.

As a response, people have begun to hoard the drug out of desperation, according to Kaiser Health News. Doctors and dentists are writing prescriptions for their family and friends, making the supply of the drug unstable — which is a problem for lupus and rheumatoid patients who have immediate needs for it. A daily intake helps with their swelling and rashes; without the drug, their symptoms could flare and they could end up in the hospital, which is an especially dangerous setting right now for those with compromised immune systems. Even a slight exposure to Covid-19 could lead to a deadly infection.

The Lupus Foundation is looking to protect the immunocompromised community by asking politicians to ensure supply for lupus patients. While they wait for legislative action, however, some patients are only being given limited supplies, and in some cases, are being sent away from pharmacies that have run out.

Practice social distancing for the sake of immunocompromised people

On Thursday, Trump told state governors he will release relaxed socially distancing guidelines based on region. Many health experts think this is a bad idea — social distancing is about limiting the spread, and the US currently has the most confirmed coronavirus cases in the world. While many people won’t grow gravely ill from the virus, they could pass it onto those who will, particularly older and immunocompromised people.

As Jonathan Kimmelman, director of the Biomedical Ethics Unit at McGill University in Montreal, told Vox reporter Leslie Goldman, “A lot of us might be relatively healthy and think we might be able to withstand the rigors of an infection, but there’s the concern about spreading it to vulnerable individuals, as well as the pressure this outbreak will place on our health care system.”

Kimmelman says this is about “social solidarity” — that “we have an ethical obligation to curtail activities, practice social distancing, and substitute activities with safer alternatives.”

Yet many able-bodied people have minimized the importance of social distancing, perhaps because of Trump’s often-unclear messaging. A video of spring breakers in Florida went viral last week for their indifference to the virus. Meanwhile, people have been sharing pictures of groups in clusters in cities like Washington, DC, and San Francisco.

Khan said it’s been frustrating to see people disregard social distancing when it’s the least able-bodied people can do to flatten the curve and protect immunocompromised people. People choose to leave their houses because of boredom, she said, but that decision can risk her life.

It’s a sentiment that Hale shares as well. She said immunocompromised people have been excluded from the conversation surrounding Covid-19, which has led to people’s careless behavior.