Impossible Foods and Beyond Meat are coming to campuses, offices, and stadiums 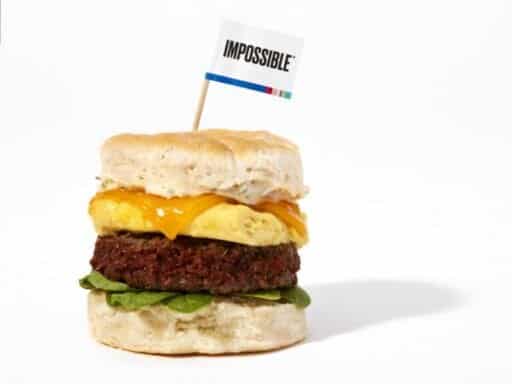 Share
Loading...
Product photo from Sodexo, one of the latest companies to add plant-based meat to their menu in partnership with Impossible Foods.

Some of the biggest food providers in the US are companies you’ve never heard of. Food service provider Aramark, for example, serves 2 billion meals each year, at schools, hospitals, ballparks, and office cafés. Its competitor, Sodexo, has 420,000 employees and 34,000 locations worldwide and serves millions of meals every day.

This week, both companies announced that they’ve signed big partnerships with the makers of meatless meat. Sodexo announced August 8 that it will debut the Impossible Burger at more than 1,500 US locations this month, with eight different Impossible meat options, including “a sausage muffin sandwich, gravy and biscuits, a steakhouse burger, and creole burger” dishes.

Meanwhile, Aramark announced a partnership with Impossible Foods rival Beyond Meat on August 12. The company will be serving, among other offerings, Beyond Sausage at Citi Field in Queens, New York, Beyond Burgers at Minute Maid Park in Houston, and a Beyond Sausage gumbo bowl for hospital patients.

These developments come on the heels of some other big news on the meatless meat front. A couple of weeks ago, Burger King, which has been gradually rolling out the Impossible Whopper across its US locations, announced that it’ll be available at every single US location — at least, temporarily. Meanwhile, Subway announced a partnership with Beyond Meat on a meatless meatball sub.

Sodexo and Aramark don’t have the name recognition of Burger King, Subway, Qdoba, and the other big restaurant chains that have announced plant-based meat partnerships in the past few months. But in many respects, they may be a bigger deal.

The producers of plant-based meat hope they can combat the health, sustainability, and animal-cruelty problems in our current food system by replacing lots of factory-farmed meat with plant-based meat products that taste just as good. Winning over restaurants is one part of that picture. But lots of our food is produced not for restaurants, but for catering, office cafés, and events — that is, for the markets that Sodexo and Aramark are key players in.

If plant-based meat is to be the triumph its proponents hope for, it has to win contracts like these — and it sounds like both Beyond Meat and Impossible Foods are making those partnerships happen.

Even better (if you’re a proponent of plant-based meat), both companies said that it was consumer demand that pushed them towards adding plant-based meat to their menus.

Proponents of plant-based meat — and the investors that have pumped hundreds of millions of dollars into the industry in the last few months — are betting that there’s a virtuous cycle that can work in their favor: Consumers demand plant-based options, companies set their culinary teams to work developing tastier and tastier options to win those consumers over, the new products get more consumers excited about plant-based meat, and that feeds additional demand.

It’s a business strategy that looked unlikely — some might say impossible — before this spring, but one that has been wildly rewarding for the companies in the last few months. The Subway and Burger King rollouts are the latest wins on that front among big brand names, but the Sodexo and Aramark announcements are equally exciting — as signs that plant-based meat is a competitive advantage in every corner of the food industry.

Clean energy technologies threaten to overwhelm the grid. Here’s how it can adapt.
How fake news aimed at Latinos thrives on social media
Eminem’s new song “Darkness” tries to enter the mind of the Las Vegas shooter
Is America too libertarian to deal with the coronavirus?
The satirical HBO masterpiece that skewered political campaigns back in 1988
The Covid-19 pandemic is threatening vital rainforests