In 2016, the Ghostbusters reboot didn’t change movies. But the backlash was a bad omen. 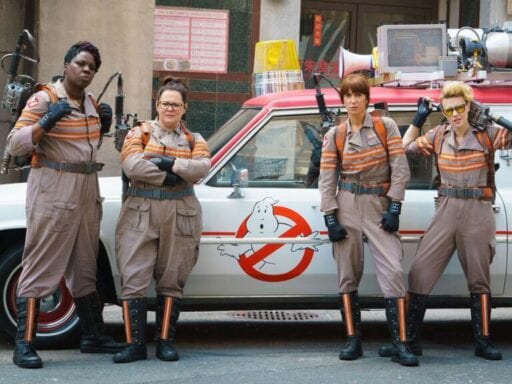 The way we talk about some movies changed, and not for the better.

None of the Ghostbusters movies are particularly good, though you might argue the original was great, in the way that cult comedy classics from the 1980s often take on a life of their own with people who grew up wearing out their VHS copies or rewatching them on TV whenever they aired. But without the nostalgia factor in play, each successive Ghostbusters film or property, at best, feels like a funny idea for a sketch stretched out to feature-length, then buoyed by its performers’ name recognition and irresistible comic performances and, eventually, nostalgia.

That’s one reason why the mid-decade announcement of a new “gender-swapped” version of Ghostbusters — which, like the 1984 original, would star four Saturday Night Live performers (three former cast members and one multi-repeat host), but this time they’d be women — was met with skepticism. Was there really enough life in Ghostbusters to sustain a whole new reboot?

That skepticism, a familiar response to most announcements of reboots and remakes, was justifiable; one clear trend of the 2010s was the never-ending resurrection of pop culture properties we thought were long over, mostly with no good reason beyond “nostalgia sells.” But more generalized skepticism over the idea of an all-woman Ghostbusters was quickly eclipsed by a bizarrely overblown backlash, months before the film even came out.

In the end, the movie was merely fine. But in retrospect, the Great Ghostbusters Apocalypse of spring 2016 was a harbinger of things to come, and a window into the ways the internet can fan the flames and provide a platform for the toxic corners of pop culture fandoms to act on their worst impulses.

The attacks on Ghostbusters and subsequent movies set a template for a different, degraded kind of criticism

In some ways, the Ghostbusters backlash was a sequel to Gamergate, which began with the bizarre and misogynistic harassment of a number of women in the gaming world, grew into a full-blown online troll onslaught, and eventually became a blueprint for recruiting mostly young men to the burgeoning alt-right. The Ghostbusters backlash was also perpetuated largely by a violently vocal minority and took some of the same shape as Gamergate, particularly in the ways it targeted women and people of color.

The casting of the film’s four stars — Kristen Wiig, Melissa McCarthy, Kate McKinnon, and Leslie Jones — was declared to be a “SJW” capitulation to “political correctness,” and Jones, the only woman of color in the cast, became the target of a particularly hateful online assault led by self-styled provocateur Milo Yiannopoulos (who was eventually banned from Twitter as a result). Yiannopoulos’s campaign against Jones ultimately reached the point where it became part of the 2016 election cycle and a flashpoint in the alt-right’s culture war.

And that was part of the point; as one Twitter user who spent months relentlessly attacking the Ghostbusters filmmakers and cast proclaimed, “Ghostbusters 2016 is a declaration of a culture war.”

The vicious threats and blatantly racist attacks were clearly the product of the worst parts of Ghostbusters’ so-called “fandom.” The same tactics would be repeated in later assaults on other movies deemed too “political” by the alt-right, which was a not-so-coded way of saying movies that featured women and people of color in lead roles in franchise films they considered to belong to the “true” fans, rather than the films’ creators: Black Panther, Captain Marvel, Star Wars: The Last Jedi, and more. In most cases, the attacks usually happened before anyone had seen the films, prompting review aggregation websites like Rotten Tomatoes to update their policies around audience scores to prevent trolls from artificially deflating scores before a movie’s release date.

The harm also extended beyond attacks on specific people associated with the movies, by making it nearly impossible to have a conversation about Ghostbusters — or Captain Marvel or The Last Jedi or any other similarly targeted property — that was actually about the movies. Instead of talking about the movies on their merits, we are left talking about the bad-faith attacks.

It’s important to delineate between the attacks faced by Ghostbusters and subsequent films, and discussions about how films handle race or gender. The latter have become an increasingly big part of our cultural conversations this decade, in which Hollywood has seemingly only begun to wake up to how its risk-averse business models and outmoded ideas of what moviegoers want have affected the stories and voices it invests in.

But those are conversations about inclusion, about making room for more people to bring their art to an audience, because a culture always benefits from a richer array of voices. The attacks on Ghostbusters and subsequent films were fundamentally about exclusion — about keeping certain artists and voices out.

The attacks did indeed end up excluding some people, though maybe not precisely the ones the trolls were targeting. It’s not the creative voices who are permanently harmed. Figures like Leslie Jones and, later, Star Wars actress Kelly Marie Tran (who ended up deleting her social media accounts after suffering racist harassment following The Last Jedi) were affected by the attacks. But movies that give a platform to people who’ve historically been marginalized by Hollywood aren’t going to stop being made. The success of films like Black Panther has made sure of that. Instead, it’s the audience’s voice that has gotten smothered.

How the Ghostbusters blowback has hurt popular art

What may have been affected most was the way we’ve talked about movies in the years following the attacks on Ghostbusters and others. Part of the fun of cinema is that it’s a communal activity. We watch movies together, we talk about them together, we argue, and when we keep doing that, the art lives on.

But movies that were targeted by hostile “fans” or trolls have run into a snag.

None of the targeted movies were complete disasters. But some of them were only okay. The Ghostbusters reboot, when it finally came out on July 11, 2016, was kind of a funny movie, but it didn’t seem destined for the cult status of the original. A few years later, 2019’s Captain Marvel, starring Brie Larson, played it far too safe to actually be a good movie. Other films, like the all-female Oceans 8, drew similarly tepid reviews.

To even start a conversation about either of those films, however, requires clarifying that the reason you’re not a fan of the movie has nothing to do with those reasons, the ones the trolls yell about. Similarly, if you didn’t like one of the targeted films that was praised by critics and beloved by many moviegoers, like Black Panther or The Last Jedi, you might feel compelled to explain that you didn’t like it, but not because you’re racist or misogynist (which is already a hard way to start a conversation). To admit you didn’t like one of these movies as much as someone else, it seems, is to enter a minefield and risk having to be associated with people whose behavior you find reprehensible.

Nobody should have to defend a movie they didn’t connect with, or that they have well-reasoned arguments about, just because some bad-faith actors got mad online. But that’s what the trolls wanted: to divide people and frustrate their attempts to enjoy and learn from art and one another, and thus keep people out of the conversation who, because their identity or ideology didn’t fit studios’ idea of the “mainstream,” haven’t historically been championed by Hollywood.

It’s still too soon, I think, to know if these effects will last into the future, or if it will someday become easier to discuss legitimate complaints with these or other movies once the circumstances around their releases are forgotten. I hope the passage of time will help. But at the end of this decade, I don’t feel optimistic about it.

Still, I think great, robust conversations about popular art are worth fighting for. And I hope that one thing we’ve learned from Ghostbusters and the many films that came after is that criticism and vigorous, healthy debate aren’t just good for art; they’re good for our humanity, too.

The US-Turkey trade spat, explained
5 women who ran on their national security backgrounds to flip GOP House districts in 2018 have won ...
It Chapter Two is fun and scary, but lacks what made Chapter One great
The TikTok drama shines a spotlight on the rare tech investor who is backing Trump
Randy “Ironstache” Bryce wins Democratic nomination to flip Paul Ryan’s House seat
We don’t know yet if lockdowns are working. But we could see results as early as this week.