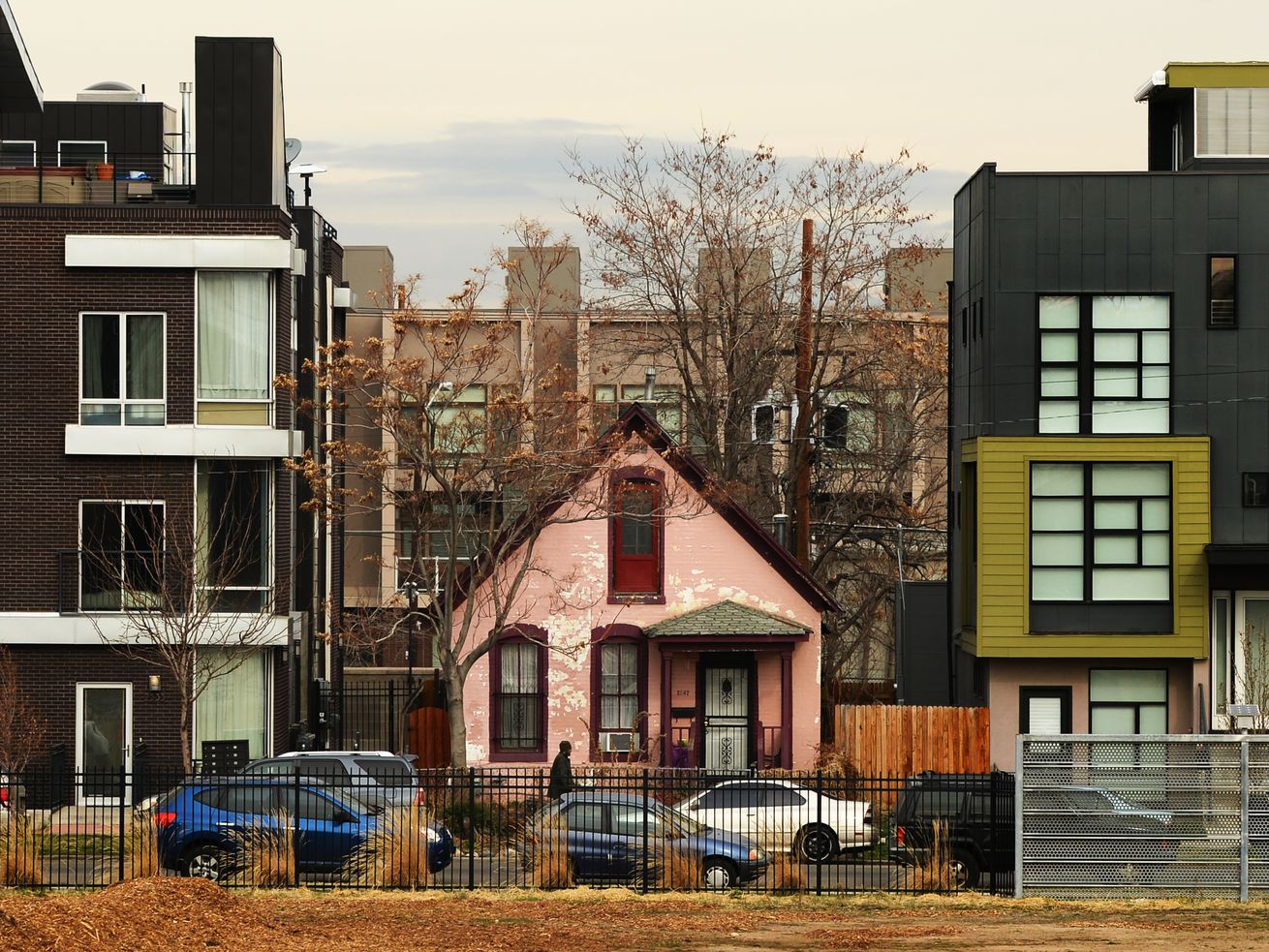 The new multifamily buildings in your neighborhood actually slow displacement.

“It’s hard to describe, but you know it when you see it. Gentrification building!”

The audio blares at the end of a TikTok video depicting a gray, white, and green modern-style building in Camden, New Jersey. The video, captioned “honestly so ugly,” has racked up a million views. The comments rail against gentrification: “It displaces the natives of the community,” the creator writes, while another commenter says that “the corner store run by a family will be overtaken by Starbucks in no time.”

The video is emblematic of a larger trend, one that looks at boxy, modern, often multifamily homes as the culprits of gentrification, displacement, and potentially violent cultural shifts in a neighborhood. The gentrification hashtag on TikTok is full of posts criticizing modern homes for mostly aesthetic reasons. In cities from New York to Philadelphia to Toronto to San Francisco, TikTok users record these properties and then overlay the videos — which have collectively earned millions of views — with audio such as the JoJo song “Leave (Get Out).” The message is the same warning: If these buildings go up in your neighborhood, displacement is just around the corner.

Displacement, the disappearance of cultural landmarks, inequality in our cities — these are very serious issues that policymakers should be working on day in and day out.

That discussion of gentrification is instead frequently diverted to what the buildings look like is a massive coup on behalf of existing property owners. Those current owners often want to maintain aesthetic control, sometimes as a means of blocking new homes from being built (experts have found that historic preservation is often weaponized to prevent new, more affordable housing options).

It is fine to dislike the way a home looks; not all art is for everyone. But the convergence of aesthetic preferences and physical displacement under the same “gentrification” banner only serves to maintain the current system of housing development, one that has made housing prohibitively expensive for many Americans and displaced people under countless different architectural styles.

The problem with this conflation became clear when I looked into the building depicted in the Camden TikTok video above. Branch Village isn’t a “gentrification building.” It’s actually an affordable housing project funded in part by low-income housing tax credits. According to the Courier-Post, the project’s second phase included the construction of 75 townhomes, all of which “will be considered affordable, accessible to those making less than 80 percent of the area’s median income.” Per an affordable housing database, the development now has 245 units.

Despite the primary concern of gentrification usually being the displacement of low-income residents, the top two comments on the video, which collectively received 76,000 “likes,” are stylistic complaints: “why is it ALWAYS h&r block green, and “they really had to pick the worst colors didn’t they?”

This is common in gentrification discourse. People want to use a word that evokes visuals of marginalized communities being displaced, either through evictions, rising prices, or even violent displacement. But, after prodding, the actual concern is artistic. The rhetorical sleight of hand is not always intentional. For many, the concepts of “new, modern buildings” and “displacement” have simply become inextricable. But the confusion around how the word gentrification is being used has real policy consequences: If people believe that new buildings work against housing affordability, they will oppose the very policies necessary to solve the nation’s housing affordability crisis.

In defense of new buildings

Disdain for modern architecture isn’t new. In his book The Invention of Brownstone Brooklyn: Gentrification and the Search for Authenticity in Postwar New York, Suleiman Osman traces the recent history of neighborhood change in the Brooklyn borough of New York City. The iconic brownstones and neighborhood design people have fought so hard to preserve, under the philosophy that such older buildings represented something more authentic and removed from the modern and capitalist architecture of Manhattan, were once new and “inauthentic” themselves.

The Brooklyn brownstones (which now sell for millions), “were in original design and intention no more or less authentic than a Levittown Cape Cod,” Osman writes. “Brownstones were an architectural trompe l’oeil designed to give a faux sense of historic grandeur. … While they would later be viewed as authentic, contemporaries dismissed brownstones as modern and artificial.”

Many of the comments around the architectural style of new multifamily buildings castigate them for looking like ugly Lego-brick structures, mass produced and phony. These are the very same things people said about what we consider today to be timeless, individualistic, and sturdy infrastructure. In fact, brownstones were “products of the mechanical age,” Osman recounts in his book. “The stone exteriors were poorly built and subject to quick decay … critics in the nineteenth century decried the mechanical, dehumanizing monotony of brownstone rows. ‘When one has seen one house he has seen them all’ wrote one writer.”

I call this gentrification railing pic.twitter.com/7oo24mJbNu

Today, we have the “5 over 1” building — which you will recognize as the quintessential “gentrification building.” In 2018, Curbed detailed how the seemingly ubiquitous design is itself “a symbol of today’s housing problems: a lack of developable land; rising land, material, and labor costs; and an acute need to find more affordable places for people to live.”

The buildings themselves are an effort to fit within the small niches made available by local building and zoning codes. According to [Richard Mohler, an associate professor of architecture at the University of Washington], due to height limits and safety/fire requirements, most of these structures are what’s known as “5 over 1” or “one-plus-five”: wood-framed construction, which contain apartments and is known as Type 5 in the International Building Code, over a concrete base, which usually contains retail or commercial space, or parking structures, known as Type 1. Some codes also mandate a modulated facade, or varying exteriors across adjacent buildings to avoid repetition.

It’s also just “the cheapest way to build an apartment”:

In this case, that’s light-frame wood construction, which often uses flat windows that are easy to install; a process called rainscreen cladding to create the skin of the building; as well as Hardie panels, a facade covering made from fiber cement. …

“Since we’re facing a housing affordability crisis, it makes a certain amount of sense to build a building as affordably as we can,” says Mohler.

And that, in a nutshell, is the problem with America’s housing: There simply aren’t enough homes where people want or need to live. The only way to get more affordable housing is to build more, of all kinds.

It is easy to defend a 100 percent affordable housing development like Branch Village in Camden, New Jersey. But even new buildings that service higher-income people are an anti-displacement tool. When higher-income residents look for housing, they have two options: Either new housing will be built for them or they’ll bid up the price of existing housing, pricing out current residents.

It can feel counterintuitive: People begin to see new entrants and fearing the neighborhood will become too expensive for them to afford, they oppose new buildings, hoping that will stop the changes, but it doesn’t work.

Economist Evan Mast identified “52,000 residents of new multifamily buildings in large cities, their previous address, the current residents of those addresses, and so on for six rounds” in an effort to show “how new market-rate construction loosens the market for lower-quality housing.” He found that such construction projects free up homes in below-median-income neighborhoods, providing for more affordable housing and reducing competition for lower-income residents. The implication is also that many higher-income residents are pricing out lower-income residents because there is an undersupply of market-rate housing.

If you don’t build enough of something, the only people who will get anything are rich people. Reflexively opposing new buildings doesn’t protect neighborhoods from gentrification but actually increases a neighborhood’s exclusivity.

Moreover, that discourse can be co-opted by people who actually oppose more affordable housing. While many who conflate modern buildings with gentrification operate in good faith, the fusion of the progressive desire to stop displacement and new buildings allows regressive anti-housing activists to use the same message to fight important pro-housing legislation. One clear example of this is Livable California, a group that has repeatedly used the language of anti-gentrification to fight sensible and modest housing-production bills in the state.

“It’s very hard to distinguish in any given situation what is a legitimate opposition to urban development on gentrification grounds,” Jake Anbinder, a PhD candidate in American history at Harvard, told Vox.

Artists, architects, and regular people alike should feel free to continue having aesthetic debates, but couching these concerns in the language of gentrification and displacement is misguided and harmful to the low-income tenants who need protection.

The political science of shark attacks

4 charts that show just how big abortion won in Kansas