In election night speech, Biden says he’s “on track” to win the 2020 election 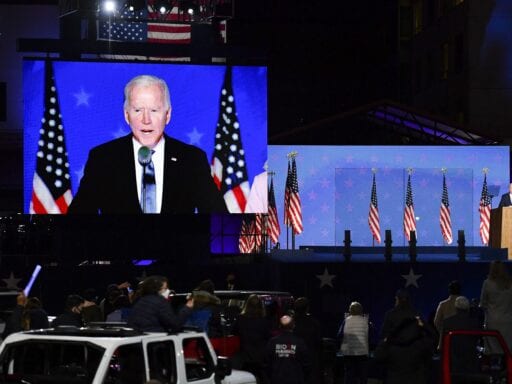 Democratic presidential candidate Joe Biden says he’s “on track” to win the 2020 election, even though neither he nor President Donald Trump has won the requisite 270 Electoral College votes needed to clinch the race.

In an early Wednesday morning address to supporters, Biden sounded confident about his chances to win the 2020 election. “We feel good about where we are,” the former vice president boomed in Wilmington, Delaware. “We believe we’re on track to win this election.”

Biden also sounded optimistic about winning a close race in Pennsylvania, which is seen as a must-win state for both candidates. While Trump is currently leading in that race, large cities like Philadelphia and Pittsburgh have yet to count all the in-person and mail-in ballots.

That’s perhaps why Biden seems cheery about his prospects of becoming the next president of the United States. “I’m optimistic about this outcome,” he said. “Keep the faith, guys, we’re going to win this.”

A call to “keep the faith” surely falls short of the victory speech he hoped to give on election night, but it beats a concession speech for him at this point.

Below is a rush transcript of Biden’s speech.

Good evening. Your patience is commendable.

We knew this was going to go long, but who knew we would go into maybe tomorrow morning, maybe even longer? We feel good about where we are. We really do. We believe we’re on track to win this election.

We knew because of the unprecedented mail-in vote, it would take a while. We’ll have to be patient until the hard work of counting votes is finished. And it ain’t over until every vote is counted — every ballot is counted.

We’re feeling good about where we are. We believe one of the networks has already counted us in for Arizona — that’s a turn-around. We just called it for Minnesota. And we’re still in the game in Georgia, although that’s not one we expected. And we’re feeling real good about Wisconsin and Michigan.

And by the way, it will take time to count the votes. We’re going to win Pennsylvania. Talking to folks in Philly, Allegheny, Scranton, and they’re really encouraged by the turnout they see. We could know the results as early as tomorrow morning, but it may take a little longer.

As I’ve said all along, it’s not my place or Donald Trump’s place to declare who has won this election. That’s the decision of the American people. But I’m optimistic about this outcome. I want to thank every one of you who came out and voted in this election.

And by the way, Chris Coons, congratulations on the race in Delaware. I’m grateful to the poll workers, our canvassers, everyone who participated in this democratic process. I’m grateful to everyone across this nation. Thank you, thank you.

You heard me say it before: Every time I walk out of my grandpa’s house in Scranton, he would yell, “Joey, keep the faith!” And my grandma would say, “No, Joey, spread it.”

Keep the faith, guys, we’re going to win this. Thank you, thank you. Your patience is great.

It’s time to move past employer-based health insurance
Here’s everything you need to know about the November Democratic debate
The fall equinox is Saturday: 8 things to know about the first day of autumn
Joe Biden likes you
One key factor will help determine how long the Covid-19 pandemic lasts
Alexander Vindman, a key impeachment witness, is dismissed from the White House